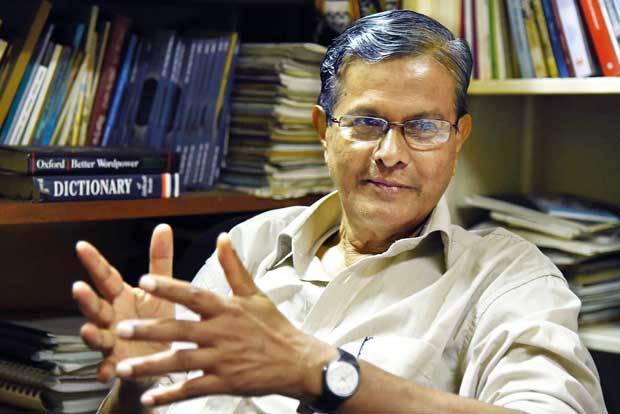 Speaking to  Colombo based Daily Mirror former chairperson of the police commission Professor Siri Hettige says that ” We have run out of viable political options in the country. People say they will go out and start a social revolution. But we know there is a long way for that kind of transformation to take place.”

[alert type=”success or warning or info or danger”]Professor Siri Hettige secured his Ph.D. in Social Anthropology from Monash University, Australia in 1980. He functioned as the Head of the Department of Sociology at the University of Colombo for nearly ten years, since 1987. After the establishment of the current government in 2015, he was appointed as the Chairman of the National Police Commission, but he tendered his resignation in January, 2017.[/alert]

We publish excerpts from the interview given by Professor Siri Hettige:

I can’t pinpoint the shortcomings of the Sri Lanka Police and there are many issues. We initiated many programmes that in the long run would address most of the issues. We had to understand the present situation before bringing about a change. We initiated a study on the whole organization, with the purpose of identifying structural problems within the Sri Lanka Police. Based on that analysis, we tried to make the required reforms. The identifying process is done. We realized that there were issues regarding women in the police service as well. We identified gender issues within the organisation.

We proposed a programme where people would comment on the performance of the police. Proposals were also made to digitize the system more as it would help improve the transparency and accuracy of the investigations. These things are underway. They are not known to people. In the long term, they will have a positive outcome.

There is so much confusion in the country. The government seems to have lost direction. They may not be able to do everything. But there are some areas you have to pay attention to without any hesitation. Things are not easy. Nevertheless, we have to make an attempt. For instance, there are three big issues in governance.

The first is reconciliation. People want to see peace among ethnic groups in this country which went through a thirty-year war. That is the bottom line. There must be some consensus on that. The government can’t really avoid that responsibility which is a major issue in the country at the moment.

The second issue is development. I think the country is not making any headway in that respect. There is a degree of confusion in the sense that there is no direction in which the economy of Sri Lanka is moving towards. There must be some effort to have industrial development in this country, because not every citizen can be packed into the service sector. Unfortunately, that is what we have been doing. Everybody is moving into the service sector. Capital is basically circulating within the service sector. However, at the end of the day, people need commodities. If there are no commodities, the country has to import them. That is exactly what Sri Lanka is doing right now. In my opinion, that is a huge problem in the economy. There appears to be reluctance on the part of the authorities to have knowledgeable people around the table to address big problems.

The third area is equality. I don’t believe we can sustain that kind of equality in this country. We should have a policy to rake the excess capital circulating within the economy. It is unbelievable that millions are spent to buy cars for politicians. We have one of the lowest tax rates in the world. Taxation needs to be reformed. Inequality will not exist if taxation is reformed in a beneficial manner. I don’t know why this is not obvious to so-called economists in the country.

If the law is not implemented and if corruption is tolerated, there is no chance a country can move forward. In the case of Sri Lanka, we say we don’t want corruption but at the same time there is corruption everywhere.

As far as I am concerned, a lot can be done even before drafting a constitution. Though we have had proposal after proposal regarding the devolution of power to local government bodies, we have not done anything. We have seen how difficult it has been for local councils to deal with issues like the garbage problem and the recent natural disasters. Local councils are riddled with corruption. A country can have the best constitution in the world. Yet, if the principles and legal provisions in the set of documents are not put into practice, we are living in a fantasy world. Have we prosecuted a single politician for corruption charges? Of course, you could say we were on the way to doing so. We are talking about corruption deals and incidents that have taken place, but we have failed to bring a single culprit to book. The laws that are already in the country should be implemented. We can’t wait any longer.

I think currently we are facing a serious situation. We have run out of viable political options in the country. People say they will go out and start a social revolution. But we know there is a long way for that kind of transformation to take place. In the meantime, we have to bring hope to people and give them direction. Unfortunately, the elections will come and certain people will be elected. We have no control of it.

Nevertheless, educational changes are already there in documents. The National Education Commission functions with academics and educationalists. However, they have not been able to implement what was in the documents due to the fact that the system has been politicized so much.

This is a very strange situation [ in relation to health and education] . If you take the health system into account, it is not entirely public anymore. We have a private health sector in the country with flashy private hospitals popping up everywhere. They also offer a very good health service attracting many people who go to these hospitals, not just for medical tests, but even for consultation. Well-to-do people naturally rely on such private hospitals. The point is that marginalized people who are poor naturally have to rely on the public health system. This has created a huge anomaly between the public and private health systems.

However, the so-called progressive medical people are not even able to address these issues. There is not a single parent today who does not pay for their child’s private education. Recently, while conducting a class, I asked my students whether they had ever gone to a tuition class. A hundred percent said yes. Yes, we have free education but it is utter nonsense. It is hard to find a single student who has passed his or her GCE Ordinary Level or Advanced Level without going for private tuition classes. There is a plethora of private institutions in villages and towns ranging from various private certificate courses to international schools in and around Colombo. Some schools are even run by politicos.

Basically, the gap between the rich and poor has rapidly widened within the education and health sectors, despite the public health and free education systems. The factor of the matter is that there are a number of people who have been marginalised. They are furious. They have absolutely no future. This is a deep-rooted problem.

Nobody is talking about it in Parliament. It is a very serious situation. The state refuses to address this issue. We are not the only country with issues in health and education. There are countries that have addressed these issues very effectively. But we don’t want to learn from the countries that have succeeded. We just talk about countries where nothing has improved. Northern European countries like Norway, Denmark and Sweden should be taken as examples. Their politicians know what they are doing. Here, we hold a microphone to politicians and they just utter all kinds of nonsense. That is the unfortunate state of Sri Lankan democracy.

First, we have to strengthen the public system. We must spend public money on improving it so there won’t be a marginalisation of the underprivileged. The rich can do whatever they like. What the rich do with their money is none of our business. We don’t have progressive taxation in this country. We leave most of our money in the hands of the rich. What is the rate of taxation here? It is just 17%. Nowhere in the world do you find this kind of low taxation. You can’t have 17% of taxation and leave 83% of income in the hands of the rich. This is merely nonsense.