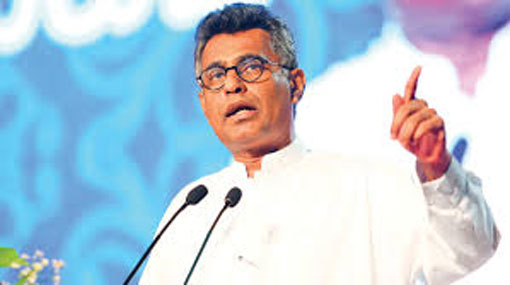 The main opposition Samagi Jana Balvegaya (SJB) MP arrived at the CID headquarters in Colombo to record a statement on a 75-million-rupee ‘Pannaraya’ promotional campaign launched in 2019 under his Ministry of Megapolis and Western Development during the previous government.

He is the second SJB parliamentarian to be summoned by the CID this week, the first being Manusha Nanayakkara who sent his lawyer instead.

Flanked by his colleagues in the SJB, Ranawaka told reporters gathered outside the CID premises that the government is engaged in a witch hunt in desperation.

“We can see the desperate situation the government finds itself in. They’re at a loss for words in the face of the former Attorney General’s statement that there was a conspiracy behind the Easter attacks, and over what we have revealed before the [presidential commission of inquiry into the 2019 Easter bombings],” he said.

Days before his retirement, outgoing Attorney General Dappula de Livera said on May 18 this year that there was clear evidence of a grand conspiracy linked to the terrorist attack that killed 269 people and injured over 500.

“So they’re on a political witch hunt to direct attention away from it. They’re employing various strategies for this. It is unfortunate that state media is being used to incite ethnic and religious tensions,” said Ranawaka.

“We’ll see what happens,” he added.

Former media director of the Ministry of Megapolis Danushka Ramanayaka was also questioned yesterday over the same campaign.

“They questioned me claiming that there was a financial fraud on a 75 million rupee promotional campaign,” Ramanayake told EconomyNext.

“There was no fraud at all, and we have followed all protocols accordingly,” he said. (Colombo/Sep24/2021)