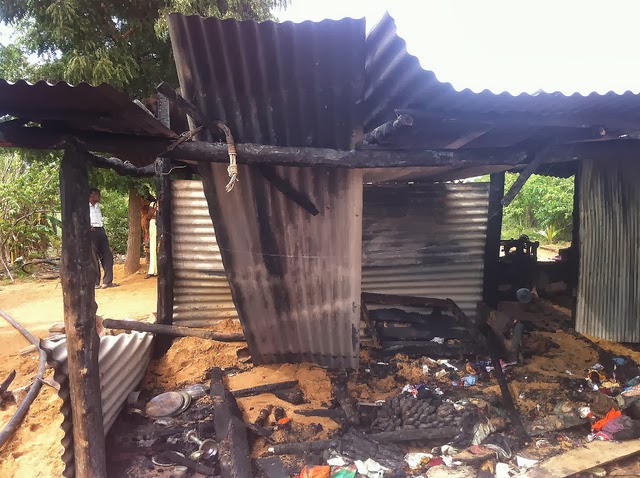 On 20th September 2013 from 6.00 – 8.00 pm : Northern Province: Jaffna  District, Electorate, Chavakachchari, Kodikamam area:
Villagers from Palavi and Katchai have reported to CMEV monitors that a large number of youths are roaming these villages. The villagers reported their fear that the presence of the youths could result in electoral violence and malpractice. CMEV urges relevant authorities to take immediate action to prevent any such violence or malpractice.

1. Mudiappu Remidios- candidate No. 18
2. Abdul Hameed Nafman Siras Mohamed- candidate No. 04
3. Kodeswaran Rushangan- candidate No. 12
4. Nadarajah Thamilalagan- candidate No. 14
5. Naganathi Ponnampalam – candidate No. 16
New posters of the following TNA candidates were seen:
1. Iynkaranatsan Ponnuthurai
2. Tharmalingam Sitharthan
3. Emmanuel Arnold
There were also fresh posters of Democratic National Alliance (DNA) candidates,  mainly down the Uduvil Road. The candidates are:
1. Senathirajah Krishnakumar
2. Kankaratnam Loganathan
3. Sivasunthari Manokaram
Additionally it was noted that the deployment of army personnel has increased noticeably. The increase of military personnel was visible along the following roads:  Manipay/ Jaffna Main road, Sangilipai Main road, Savalkaddu road and, Anaikoddai road. It was stressed that members of the military moved freely and frequently on the said roads, thus making the presence of the army felt more strongly.

On 19th September 2013 at 12.30 pm in Northern Province, Jaffna Electoral District, Kangkesan Thurai Electorate.
CMEV monitor reported that he went to Arasadi Road, Kollangalati, where he witnessed military personnel using black oil to deface posters of all candidates. Thereafter no posters were visible in the area. Whilst the military was so engaged, vehicles (registration No NP KW 1603 and CP PE4685) belonging to UPFA candidate Shiras and with posters of the candidate displayed on them, were seen at the same place.

On 19th September 2013 at 12.53 p.m: Northern Province Jaffna Electoral District, Odupidi Electorate.
As reported by a CMEV monitor in Odupidi, from the 10th of September 2013 a significant military presence has been observed in the area. On the main roads of Odupidi and on by roads, a significant number of military personnel have been deployed.

19-09-2013/ 20.00h/ Northern Province/ Mannar District/ Mannar Electorate/ Tharapurram
As reported by CMEV monitor in the area, villagers from Vellankulam and Ganeshapuram were transported from these villages to Tharapuram by UPFA supporters and given dry rations. It was noted further that the villagers were transported in 3 CTB buses. The CMEV monitor further confirms that the distribution of dry rations was organized by UPFA candidate No. 4, Mr. Abbas Abdul Rifkhan.

19-09-2013/ 20.15h/ Northern Province/ Mannar District/ Mannar Electorate/ Pesalai
As reported by CMEV monitor in the area, UPFA supporters were provided with dry rations to be distributed amongst the people of the 4th and the 8th housing colonies of Pesalai. Currently the dry rations are stored at the residences of two of party supporters identified as Rani and Stephen whose full names were not revealed for security concerns. They live down K. V. Road, Pesalai. The rations are to be distributed on the night of the 20th.

19-09-2013/ 23.15h/ Northern Province/ Mullaithivu District/ Mullaithivu Electorate/ Muliavilai
It was reported that an election meeting of the UPFA candidate Mr. Sivalingam Sathish Kumar contesting under number 03 in Mullaithivu district, was held at the garden premises of a UPFA supporter Mr. Thiyagaraja Arulvendan near the Katta-Vinayagar Kovil (Hindu temple). About 35-40 persons have attended the meeting. A villager, Mr. Kanapathypillay Dushyanthan of Mulliyawallai Central, Mulliyawallai informed CMEV about the meeting. He stated that the meeting had started around 10 pm and by the time he had called CMEV, around 11.15pm, the meeting was still going on.

19-09-2013/ 23.53h/ Northern Province/ Vavuniya District/ Vavuniya Electorate/ Cinna Cippikulam, Cheddikulam
As reported by CMEV monitor, UPFA candidate No 7, Mr. Mohideen Kani Sego Munajithu and around 8 to 10 supporters of the UPFA have done house-to-house visits and handed cash to residents in the Cinna Cippikulam village within the Cheddikulam DS Division in Vavuniya. The report also indicates that the campaigning was carried out in the vehicle bearing registration number NP-JP 7100.