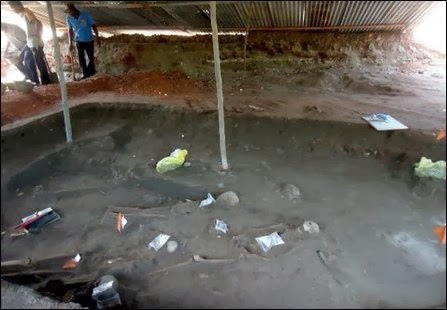 The number of skeletal remains found in the Mannar mass grave increased to 45 yesterday as a special team from the Criminal Investigation Department (CID) recorded statements from the officials involved in the excavation of the remains. One more skeletal remain was unearthed yesterday.
A group of CID officers who arrived at the site at Thiruketheeswarm on Friday recorded statements of the Anuradhapura Judicial Medical Officer D.L. Waidyaratne and a forensic expert
.The remains have been packed into 13 boxes which are being guarded by the police. The excavation is to continue on Monday.

Meanwhile the JVP called for an expeditious and unbiased investigation by the Government into the mass grave incident.  Iin a statement the JVP said “Reports say that there are remains of skulls which could be of children and that most of those killed have been shot. Therefore this grave might be one of a chain of inhuman massacres.”

“This area said to have been under the control of various parties. Whilst the Government says that these remains may be of civilians killed by the LTTE or the Indian Peace Keeping Force, another party asserts that Government security forces are responsible,” stressing that what is more important is to get at the truth and implement the law against the culprits.

The JVP said that the Presidential Commission which was appointed to investigate the Matale mass grave case has been forgotten. Such fraudulent commissions can do no justice but can only deceive the public, it said.
Pix and text by R. Lambert