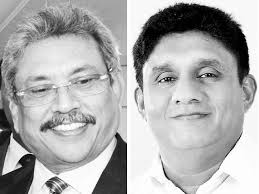 I wonder how many people remember ‘Always Breakdown.’ It was probably the first political satire TV series in Sri Lanka, long before ‘Kathura,’ ‘Ethuma,’ and ‘And Company.’ The political figures were all puppets: no one was spared, though the series, broadcast on TNL, singled out Chandrika Kumaratunga. Whatever the politics, it was an overnight sensation. More than 10 years later, ITN, in the hands of the Rajapaksa regime, turned the tables on TNL with another series; ‘Jabos Lane,’ in many ways an inferior show, primarily ridiculed Ranil, Chandrika, and Mangala – what Dr. Dayan Jayatilleka describes today as the “federalist troika.”

Today, of course, there’s no need for satire of that sort (the internet has since taken satire away from the confines of your TV screen.) As a character from a play I saw two years ago (Affair at Ward Place Hotel) put it, “Politics is theatre, theatre politics.” So long as this is true, there’s no need for parody; we see it every day, onstage, and onscreen. The battle lines between Gotabaya Rajapaksa and Sajith Premadasa, if things continue the way they are until Election Day 2019, are at one level a reminder of that. If it’s hilarious or sobering to see so many come out in defence of one over another, though these same people vowed never to support one candidate or the other, or anyone for that matter, well then, too bad.

It was obvious, right from the start, that Gotabaya Rajapaksa was going to be the SLPP’s candidate. There were three reasons. The first was the absence of a formidable contender. Dinesh Gunawardena and Vasudeva Nanayakkara are much better versed in the polemics of parliamentary procedure, and are older and more seasoned (if you want to take it that far), but neither of them has that strongman appeal. This is not to deny or put down their immense contribution: it is they, along with Wimal Weerawamsa, Udaya Gammanpila, and, yes, even Kumara Welgama, who made Gotabaya possible. The second reason was that if the SLPP was a Rajapaksa outfit, it didn’t make sense to put forward Mahinda, or Mahinda’s offspring, or someone from the sidelines like Basil. Gotabaya it had to be, and Gotabaya it was. The third reason was more complex. Newspapers, journals, as well as websites hostile to the Rajapaksas repeatedly painted a picture of the Rajapaksa brothers squabbling with each other over the presidential candidacy. Vasudeva Nanayakkara’s hesitancy and Kumara Welgama’s open condemnations of Gotabaya merely stoked this fire, and the UNP had a field day: for them, it was not unlike the 80s when the SLFP was wading through one family struggle after another, thus making the UNP’s dominance all the more secure. It was thrilling, for instance, to see and hear Basil hinting it was a disappointment for him that he was not going to be the President. Further reports, that Gotabaya was talking with Ranil to secure the latter as his Prime Minister (over Mahinda) in December, thereby throwing a lifeline to the now defunct national government between the UNP and SLFP, strengthened that claim.

We know today that to have compared the Rajapaksas with the uncle-nephew, mother-daughter, and brother-sister squabbles within the UNP and SLFP was anachronistic. Contrary to what people think, the Rajapaksas are more unified than the Bandaranaikes were. If Basil’s offhand remarks denied this, last week’s rally confirmed it. As long as the bonds among the four brothers continue, and as long as the Rajapaksa phenomenon is not hindered by the antics of their sons, the SLPP is on a course of victory. But that victory course has now been questioned; those rooting for the Rajapaksas are making a miscalculation if they deny that Sajith Premadasa, by his proposed candidacy, has put up such a challenge. The JVP is of course an alternative to this, but even that needs to be reconsidered.

“It was obvious, right from the start, that Gotabaya Rajapaksa was going to be SLPP’s candidate”

Mervyn de Silva, writing in 1988 to the Lanka Guardian, described Ranasinghe Premadasa’s political career as “a major sociological breakthrough for the Sri Lankan system.” In that essay he wrote of the President, that “he was not a militarist” but a “populist who believes in divine rather than armed intervention.” There were many others who described him as an Asokian, even a Gandhian. Indeed, there were so many things written on him, just as there will be so many things written on his son. But based on such generalisations and flattering remarks, are comparisons between him and Sajith, like those made between the Rajapaksa and Bandaranaike siblings, also anachronistic?

Let’s get down to the comparisons. Like his father, Sajith has had to fend off opposition from the higher ranks of his own party (though unlike him, the son has not yet threatened to go out on his own and start his breakaway party). Like his father, his vision for the country is more populist than militarist, more pluralist than monist, more unitary than federalist. And like his father, many commentators attacking him do so from the perspective of English speaking elites who have a problem with outsiders taking the baton from the Kolombian echelons of the UNP. The preferred icon of the latter remains Ranil Wickremesinghe, and their preferred successor would be someone like Karu Jayasuriya. Unfortunately for them, with the Easter attacks still fresh on our minds, the UNP of 2019, like the UNP of 1988, has no choice: it has had to project a Premadasa as its face.

How can we take these comparisons forward? Can we extrapolate and say, for instance, that Sajith Premadasa is to Ranasinghe Premadasa what Louis Napoleon was to Napoleon Bonaparte? Let’s not kid ourselves, least of all because Louis himself was never a replica of his uncle, even though his candidacy (if you can put it that way) won supporters on the basis that his regime was going to be a continuation of that uncle’s empire. This is not to say that the son should be the father’s replica (times are different, as are political circumstances), but then to argue that he is, or he must be, is to subscribe to a fallacy. Indeed, if criticism of the man by supporters of Ranil, the individual who will finally decide on Sajith’s political future, is anything to go by, he may be facing a bigger challenge than his father ever did.

In 1988, Premadasa had anti-Indian sentiment and anti-LTTE sentiment on his side; in 2019, all his son has is anger at the Royalist clique of Ranil Wickremesinghe for their mishandling of the Easter Sunday attacks. Although Ranil managed in the end to escape as an innocent (both State and private media outfits, barring those batting for the Rajapaksas, perpetuated the story that Maithripala, as the Defence Minister, was to blame, forgetting that the Prime Minister’s flimsy excuse that he was not allowed into national security meetings does not, and will never, absolve him), people have not forgotten, especially not Christians and Catholics from areas affected by the bombings. Whether this will be enough for Sajith to wade through easily is another matter. There is another key difference: in 1988, J.R. was all of 83. Ranil, his nephew, is now approaching 70. You can argue it’s time to retire, but if J.R. retired as an octogenarian, who’s to deny Ranil, or Karu, the opportunity to run, or run again?

Those who have called openly for a Sajith candidacy so far are those whose circumstances have been drastically reduced. Top among them, of course, is Harin Fernando, who organised the Badulla rally and earlier threatened that he would retire if Sajith’s candidature was not endorsed. Shyamon Jayasinghe, in a piece that reveals, word to word, his antipathy towards the possibility of Sajith’s candidature, lambasts Harin for this: one thing he can do, he writes, “is organise crowds for meetings”, adding that “as minister he has been a failure” who “has not been able to rescue our cricket reputation.” When one remembers how this same critic, in 2014 after the Uva elections, in a critique of a critique of the UNP’s performance authored by Dayan Jayatilleka, described this same failure of a minister as a “rising star” who “came out as a great hero after having shown a rare boldness and organising capability”, one wonders as to what extent political amnesia can go; for some, even those affected by his incompetence and mishandling of vital national affairs, Ranil Wickremesinghe remains an infallible icon, at whose altar everyone and, it seems, everything can be sacrificed.

We have as of now a firm battle line between (as Dr. Jayatilleka puts it) a “statist nationalist” on the one hand and a “pluralist populist” on the other. I am not really sure whether such stark dichotomies operate in reality. Nor am I sure whether Gotabaya is the visionary that his brothers were not, or whether Sajith is the son of his father, or whether critiques of both by the likes of Shyamon are wholly invalid. Come what may, however, we shall know soon. All we know now is that Sajith represents a formidable challenge for Gotabaya, because Sajith, like Gotabaya and unlike Ranil’s regency, appeals to popular forces. As for what Gotabaya on his own and the third force, the JVP, represent, I’ll sketch out later.