Sri Lanka: Not the time for a referendum, Sirisena and Wickremesinghe agrees 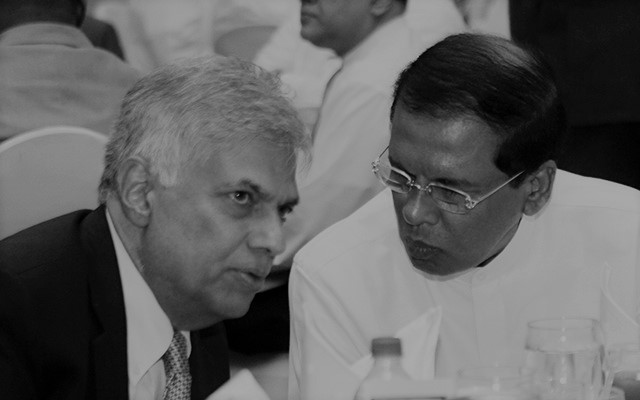 At the  recently held Steering Committee of the Constitutional Assembly meeting “all were allowed to speak their minds out at the meeting. Opposition Leader Sampanthan very strongly urged for a new Constitution with a referendum, but both the President and Prime Minister were of the view that this was not the right time for it. They asked to concentrate on completing the draft document and place it before the House”  reports state owned Daily News.

A member of the Steering Committee speaking to the Daily News had said that the priority has been given to agree on the substance of the Constitutional reforms and present the draft report before the Constitutional Assembly. “Whether it would be a ‘new Constitution’ or an ‘Amendment’ will be decided later,” he said. However, it is learnt that President Maithripala Sirisena and Prime Minister Ranil Wickremesinghe in a meeting with the Steering Committee members recently had expressed that this was not “the right time” for a referendum.The meeting had been attended by Opposition Leader R Sampanthan, TNA MP M A Sumanthiran, Ministers Malik Samarawickrama, Nimal Siripala de Silva, Anura Priyadarshana Yapa, Rauf Hakeem, Mano Ganesan, Rishad Bathiudeen and State Minister Dilan Perera.

The interim report of the Steering Committee giving the contours of the Constitutional reforms was initially expected in December last year and it’s debate was to be taken up in early January, but was postponed indefinitely as there was no consensus. Steering Committee sources said the SLFP represented by Ministers Nimal Siripala de Silva, Susil Premajayantha and State Minister Dilan Perera last week “expressively maintained the position that their party prefers Amendments rather than a new Constitution”. However, the UNP, TNA and other minority parties were demanding a new Constitution followed by a referendum.

The SLFP had also expressed that it wants to continue the Executive Presidency and maintain the unitary character of the State. Minister de Silva had said a strong Presidency is needed if power devolution is to become a reality.

However, President Sirisena during the meeting chaired by him had stated that he stands by his original position on the Executive Presidency. “I have told the country my position clearly, but my party holds a different view,” the President has stated.