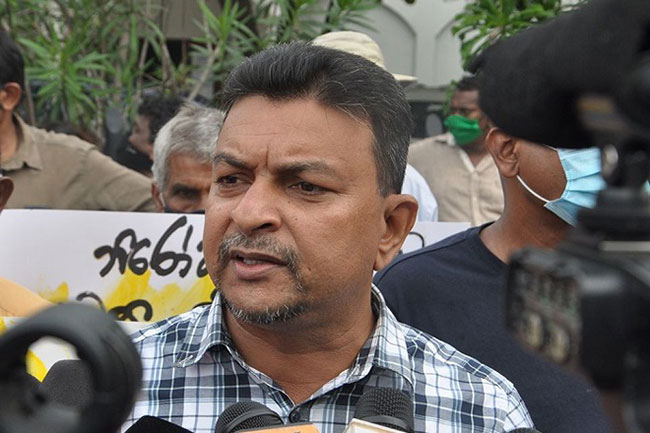 The Ceylon Teachers Service Union (CTSU) General Secretary Mahinda Jayasinghe has accused the Criminal Investigations Department (CID) of not having initiated an investigation into three alleged death threats he had received via telephone calls, even though more than 20 days have passed since a complaint was lodged with the CID in that regard.

Speaking at a media briefing yesterday (24), he claimed that a complaint was lodged with the CID on 2 August with regard to the threatening telephone calls he had received; however, the CID had not even recorded a statement from him concerning the matter. He also claimed that he had received certain other threatening calls even after the complaint was lodged with the CID.

Jayasinghe, on 2 August, lodged a complaint with the CID requesting an inquiry into three death threats he had received via telephone calls. Speaking to the media after the complaint was lodged, he said that he had received one call from a Sri Lankan living in South Korea and two from local telephone numbers.

Speaking further, he claimed that the main reason for such threats was the fact that he was among the leading members of the trade union actions launched by several teachers and principals trade unions, demanding solutions to their issues including the teacher-principal salary anomaly issue.

When inquired about this, Public Security Ministry Secretary, Maj. Gen. (Retd.) Jagath Alwis said that if there is such a delay, he would look into it.

Jayasinghe was instrumental in initiating the ongoing teachers and principals trade union actions including withdrawal from online teaching activities.