Sri Lanka: No confidence in who or what? 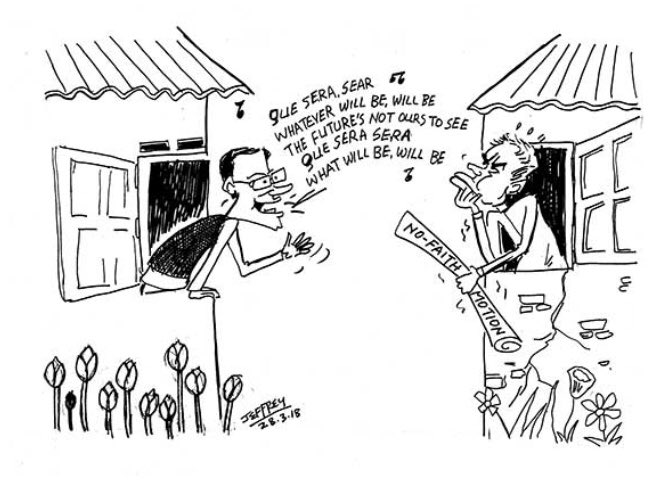 Come Wednesday night, politics will take a whole new narrative in the post-No Confidence action. The figuring of parliament certainly shows a success for Ranil Wickremesinghe, but our politics is so corrupt that even the best figures could be twisted by the powers of politics and money. Let’s not forget that the defeat of Mrs. Sirimavo Bandaranaike’s government was enabled by the vote of a member who had a flat tyre on his vehicle, which kept him away from voting. Prime Minister Wickremesinghe must be well aware of this, because his late father, Esmond Wickremesinghe, was the handler of the voters against Mrs. B at that time.

We are now moving to the ‘Come or Go’ politics, which is devoid of any principles or even a semblance of an interest in service to the people. The latest statement by SLFP State Minister Lakshman Yapa Abeywardena is that SLFP MPs cannot oppose the No Confidence Motion, because if the motion is defeated, the coalition government will not continue.

[alert type=”success or warning or info or danger”]Funny, isn’t it? Is there any coalition government left to continue, even before the NCM? And this comes from a State Minister in the government where Ranil W is Prime Minister.[/alert]

What is the government that can continue if the NCM is passed? Was it one elected by the people? Is it to be a government of the Joint Opposition, in numbers, and the Maithripala Sirisena-led SLFP in a minority? What is the promise of politics and governance that such an alignment could offer?

Do these opponents of Ranil W within a ‘unity government’, who certainly deserves plenty of opposition, not know the traditions of parliamentary democracy where a vote of no-confidence against a prime minister is also a vote of no-confidence against the government? Are they just trying an escape clause by stating the President is the Head of Government, and not the Prime Minister? Possibly, but the same Prime Minister was also chosen by the same President! Wow, that is the stuff of Come or Go Politics.

But, whatever happens in Parliament on Wednesday night will certainly open a whole new chapter in the politics of Sri Lanka. And, whether a winner or loser in the No Confidence game, Ranil will certainly be a player in the coming games too.

It is the game of the Executive Presidency that has already begun.

Who will be the next president of Sri Lanka? Will it be an Executive President or a ceremonial president? That is the stuff in the current political discourse. Why did Mahinda Rajapaksa not sign the no-confidence motion against Ranil? Is it friendship, respect for his long record in politics, or a strategy for the future?

Will Ranil consider running for the Executive Presidency at the next election in 2020? Not very likely – he must know about his lack of popularity, and is there anyone else with a sufficient big national image to be the President in the UNP – Not to be seen.

The only leader who has such an image, undoubtedly with the Sinhala majority, is none other than Mahinda Rajapaksa.

But, he cannot be president again under the 19th Amendment.

So, is there anyone else in the SLFP or SLPP – who could be Executive President? There are only two choices- Gotabhaya or Basil – both Rajapaksas. Do brotherly opportunities go deep enough in power politics? Not very likely. Mahinda was always the boss, and he knows it must be so.

Which means the next big issue of is his certainty of his being the next prime minister.

Then, would he wish to be prime minister under an Executive President Sirisena – hardly likely – not with that hopper eating traitor!

So we are fast moving to the abolition of the Executive Presidency.

That is where Ranil and the UNP has another role to play. In obtaining the two-thirds majority in parliament for the move – with the massive support of the UNP and the full support of the SLPP, on a call from Mahinda Rajapaksa. The UNP can also help obtain the majority for the abolition of the Executive Presidency in the referendum that would follow.

That seems to be the new big game in politics.

The tainted image of the Maithripala Sirisena leadership of the SLFP will be of no purpose in this new political calculation. Also, these moves will certainly shatter his dreams of breaking the promise given to the country and Ven. Sobitha Thera that he would not seek another term as Executive President.

The big blasts of politics over the NCM will also most likely pave the way for a parliamentary election, before the next Presidential Election. That is how Mahinda Rajapaksa could direct both governance and politics, as truly powerful Prime Minister, working with a Ceremonial President. Those who are making a big noise about wanting to defeat Ranil in the NCM, don’t seem to have any idea of how the politics of power are fast moving. What is fast emerging is not No Confidence against a person, although SLFP promoters would like to think so, but a No Confidence against the Executive Presidency.

That is where the hopper eating politics of Maithripala Sirisena will see a conclusion, and the deeper strategies of both Mahinda Rajapaksa and Ranil Wickremesinghe – an interesting political duo – will have its say.

Grabbing the Central Bank from the Prime Minister and giving it back to the Finance Ministry or replacing Ranil’s Central Committee of Economic Management (CCEM) with Sirisena’s National Economic Council (NEC), is not the stuff of politics today. That is part of Sirisena playbook politics. The No Confidence is not against whom, but against the Executive Presidency. It is time for all presidential players to watch out.