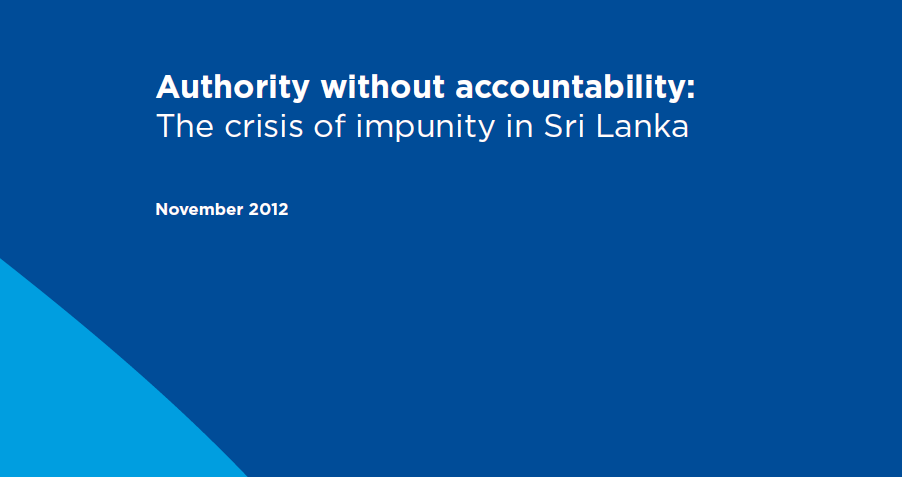 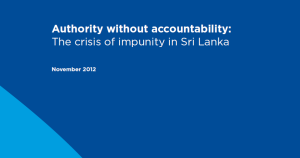 The Sri Lankan government must immediately cease its assault on the independence of the judiciary, the ICJ said in a new report released today.

The 150-page report, Authority without Accountability: The Crisis of Impunity in Sri Lanka, documents how, and why, it has become nearly impossible for people who have suffered serious violations of their human rights to receive justice in Sri Lanka. Recent attacks on judicial officers and judges only highlight the systematic erosion of accountability mechanisms.

“Victims and survivors of major human rights violations do not receive redress, and perpetrators are not brought to justice. The absence of justice removes an important deterrent to future perpetrators,” said Sam Zarifi, ICJ’s Asia Director. “This situation is the very definition of a climate of impunity, and constitutes a serious breach of Sri Lanka’s international obligation to protect and promote human rights.”

The Crisis of Impunity describes how decades of Emergency rule and legal immunities granted to the President and other government officials weakened the checks and balances in the Sri Lankan government, while political interference—particularly in the conduct of the office of the Attorney-General—in practice led to a failure of justice in a number of key cases.

“The Sri Lankan government squandered a unique opportunity to reestablish accountability after its defeat of the Liberation Tigers of Tamil Eelam in 2009 through military operations fraught with violations. The Tamil Tigers also enforced their rule through horrific human rights abuses and significantly harmed the rule of law and respect for due process in the areas under their control in Sri Lanka,” Zarifi said.

“We recognize the right and duty of the Sri Lankan government to protect the security of its people. But the government’s actions, including counter terrorism efforts, must at all times respect human rights law and international humanitarian law,” Zarifi added. “There is no conflict between the State’s duty to ensure the security of individuals and to protect human rights. One of the crucial results of the lack of accountability in Sri Lanka has been that the abuses perpetrated by the government and the LTTE (as well as other armed groups) have not been properly accounted for in a court of law.”

The Sri Lankan government has sought to evade the domestic and international demands for justice for the serious violations of international law by both sides to the conflict, estimated to have killed or injured tens of thousands of civilians. The government created a Lessons Learned and Reconciliation Commission (LLRC) that was explicitly not an accountability mechanism, and was widely and rightly criticized as being faulty in its mandate, its membership, and its conduct, the ICJ points out.

Yet even the LLRC emphasized the need for an independent judiciary, a transparent legal process, and strict adherence to the rule of law, stating that these were necessary for establishing and maintaining peace and stability in the country. These recommendations remain unfulfilled to date, the ICJ stresses.

“The situation has gotten particularly bad in the past few months, as we’ve seen the attacks on the judiciary turn into acts of physical violence,” Zarifi said. “The Sri Lankan government must immediately act to reaffirm the independence of the judiciary and to protect judges and legal officers from violence.”

On 7 October 2012, unidentified persons assaulted the Secretary of the Judicial Service Commission, Manjula Tillekaratne.  In July 2012, Government Minister Rishad Bathiudeen threatened a Magistrate in Mannar and then allegedly orchestrated a mob to pelt stones and set fire to part of the Mannar courthouse.

This Report is the first in a series of national studies examining Authority without Accountability in South Asia. It calls on the Government of Sri Lanka to respect its international obligations to investigate human rights violations and bring the perpetrators to justice through prosecution and provide victims with effective remedies and reparations for their injuries. The ICJ also urged the Sri Lankan government to: