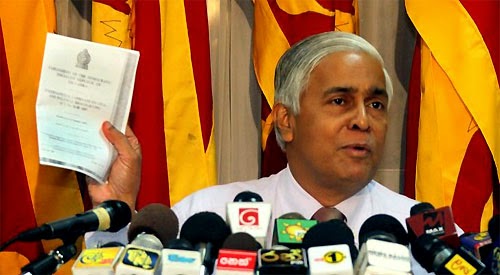 Commenting on the controversy over the new appointment to the Supreme Court, former Chief Justice Sarath N. Silva said yesterday according to an existing ruling the appointment of judges should be done according to an existing judgement, the appointment of judges should be done only on the recommendation of either the Chief Justice, or the Justice Minister or the Attorney General or all of them.
“This is based on a ruling by Justice Mark Fernando in a case filed against the appointment of Shirani Bandaranayake to the Supreme Court,” Mr. Silva said.
The Supreme Court upheld the argument put forward by Sarath N. Silva who was then the Attorney General and supported the appointment.
“However in this instance it is unlikely that either of these three officials have recommended the person to be appointed as a Supreme Court Judge,” he said.
Mr. Silva said there should be transparency with regard to the appointment of judges to the country’s apex court and it should not be those handpicked by the head of state.
Meanwhile the former Chief Justice said the main opposition was partly responsible as it did not protest when such important appointments were sent to the Parliamentary Council.
“The Opposition must attend the Parliamentary Council meetings and make strong protests and make the public aware about these appointments,” he said.
Mr. Silva said Opposition Leader Ranil Wickremasinghe and UNP MP D.M. Swaminathan were nominated to the Parliamentary Council but they don’t attend the Council as a protest against the 18th Amendment.
“By submitting the name of Mr. Swaminathan, the UNP had accepted the Parliamentary Council and if it wanted to boycott, it should not have sent a representative,” he said adding that this has resulted in the Parliamentary Council becoming a rubber stamp.
“So I find fault with the main opposition for not protesting at the Parliamentary Council meetings,” Mr. Silva said.
A controversy has arisen over the appointment of Priyantha Jayawardena PC to the Supreme Court to the post that fell vacant with the retirement of Supreme Court Judges Justices Shirnaee Tilakawardena and Sathya Hettige.
On April 30 the Bar Association of Sri Lanka (BASL) which represents the legal fraternity issued a letter to the president of regional bars to send their views on the appointment to the Supreme Court.
In its letter the BASL said, “It is absolutely essential that proper and valid criteria are used when appointments are made to the Apex Courts and that this should be transparently evident for all to see. The merits of the appointment should be clear and it should be obvious that, the time honoured and treasured values of clear eligibility, seniority and merit are taken into account. If the entire Legal System is to duly function, there must be confidence that career judges can confidently aspire to reach the Apex Courts in the course of a long judicial tenure.”
“As you may recall, these criteria were followed in the past but, in more recent years, concerns keep arising as to whether these salutary criteria are being no longer considered and whether appointments are made at the whim of the appointing authority who appears to wield unfettered powers under the Law as it now stands,” the BASL said. “As you would also be aware, the Constitutional Council, which functioned for a period, formulated, for all to see, the criteria which should be followed when judges are appointed to the Apex Courts. However, with the 18th Amendment to the Constitution, these essential safeguards have been stripped away.”
Meanwhile the Young Lawyers Association, an independent organization representing new attorneys made a strong protest against the appointment of Mr. Jayawardena and they claimed it was a political appointment.