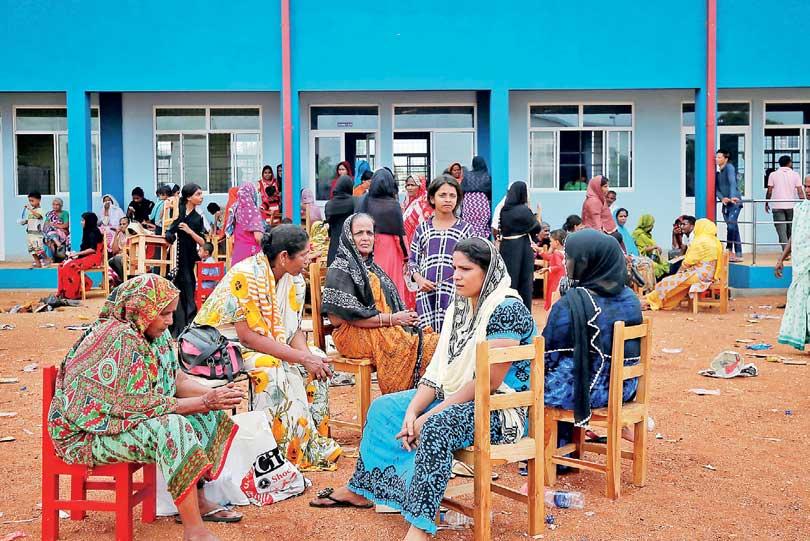 People who have been relocated to a school building due to an overnight gun battle between troops and suspected Islamist militants (Reuters).

An eminent Sri Lankan researcher on radicalization and terrorism, Dr. Rohan Gunaratna, urges the Sri Lankan government, the island’s political and religious leaders, and civil society, to ponder over the ill-effects of physical, social and psychological ghettoization which has been going on in Sri Lanka for quite some time.

A co-author of “Three Pillars of Radicalization” (Oxford University Press, 2019), Singapore-based Dr. Gunaratna believes that the Easter Sunday multiple suicide attacks by local affiliates of the Islamic State (ISIS) at least partially stemmed from the ghettoization of the Muslim community in Sri Lanka.

The motivation and the targets chosen smacked of the agenda of the global Islamic State (ISIS) and had little to do with inter-communal relations in Sri Lanka itself. But a fact which cannot be ignored is that those who actually carried out the bombings were Sri Lankan Muslims. Therefore, the April 21 carnage cannot be seen entirely out of the local, Sri Lankan, context, and that context is a deep-rooted and progressive ghettoization of Sri Lankan society, Dr. Gunaratna says.

“In Sri Lanka there are separate schools for the Sinhalese, Tamils and Muslims. And Hindu school students study only Hinduism, while Muslims study only the Quran and the Christians, only the Bible. Students do not follow an inter-faith course to understand and appreciate each other’s doctrines and practices,” he pointed out. “And there are territorial enclaves too,” he added.

The Tamils oppose the settlement of no-Tamils in the North, denouncing any such settlement as “State-sponsored colonization”. In the Eastern Province, there are distinct Tamil, Muslim and Sinhalese villages. In Batticaloa district, an entire town, Kattankudy, is exclusively Muslim. No non-Muslim would be able to live or buy property there.

April 21 carnage cannot be seen entirely out of the local, Sri Lankan, context, and that context is a deep-rooted and progressive ghettoization of Sri Lankan society.

No wonder then, Kattankudy was the breeding ground of ISIS activists and leaders in Sri Lanka, including the man who led the pack of suicide bombers on Easter Sunday, Mohammad Cassim Zahran. Kattankudy has been the headquarters of the National Thowheed Jamaat (NTJ) as well as the new and more deadly and ideologically radical Jamathei Millathu Ibraheem (JMI).

Dr. Gunaratna pointed out is that Sri Lankan Muslims have been progressively isolating themselves from other religious groups “by reducing their interactions with other groups to the barest minimum”. This is so even in Colombo where there areas which are predominantly either Muslim, Tamil or Sinhalese. Food habits, religious practices and considerations of security in times of civil unrest have made communities form exclusive or near exclusive enclaves creating invisible barriers to interaction.

The Wahabi or Salafi Islam brought to Sri Lanka from their homeland in Saudi Arabia, has made the Muslims of the island dress differently and live an isolated life in order not to get influenced by non-Islamic or un-Islamic ideas. According to a high profile Muslim lady from the Eastern Province, until recently, interactions between the Muslim and Tamil women were frequent and close there. But these have greatly lessened over the years now.

“There were weekly markets in which Muslim and Tamil women used to sell their wares and homemade products sitting on opposite sides of the market street. In the process they would chit chat and get to know each other. But growing Wahabi influence has prevented Muslim women from indulging in such public activities. The result is a dis-junction between Muslim and Tamil women and families,” she said.

Ghettoization is represented by separate living enclaves, separate schools and separate subjects of study. It leads to exclusivism and isolation but also feelings of separateness, uniqueness, superiority or inferiority vis-à-vis the ‘other’. “Isolation breeds a distrust of the other. Distrust leads to avoidance and fears. Fears, in turn, result in violence and terrorism,” Dr.Gunaratna pointed out.

Stigmatization and labeling of communities, especially Muslims is common in Sri Lanka, India and Myanmar. It arises either from self-isolation or discrimination or both. Stigmatization is a social wound which tends to fester indefinitely be at the root of violence and terrorism.

Influenced by the ISIS since 2014, some radical group of Thowheed groups had started preaching hatred for other religious groups. Videos made in Tamil Nadu spread such ideas. They are on Youtube and therefore widely watched. Many of the Thowheed speakers hold audiences, especially the youth, spell bound by their orations in chaste Tamil. One video from Tamil Nadu called upon Muslims to hate Kafirs even if relations with them, at the inter-personal level, were excellent.

Ghettoization of the mind (in all communities) leads to communities not being able to see things from each other’s point of view. The Sinhalese feel insecure when they see fully covered up Muslim women in the context of growing terrorism. During Mahinda Rajapaksa’s Presidency, the Buddhist radical Bodu Bala Sena (BBS) had sought a ban on the burqa. In response the moderate Muslim Council of Sri Lanka (MCSL) launched a project to supply colourful burqas in exchange of black ones. But the project fizzled out eventually.

Two days after the April 21 serial blasts, Ashu Marasinghe MP, moved a Private Member’s Bill to ban the face veil and the full length burqa. Realizing the gravity of the issue, the All Ceylon Jamiyathul Ulema (ACJU) advised Muslim women to remove their veil when required. A few days later, the ACJU advised Muslim women to avoid the face veil altogether and that, within a week. The Muslim Council of Sri Lanka went along with the ACJU, but sought two weeks time to get the message across to the community spread over the island.

Meanwhile, President Maithripala Sirisena announced his intention to ban the face veil under Emergency Regulations on April 29. A woman with a belt bomb strapped to her body had set it off when the police went to her house to question her about her suicide bomber husband at Dematagoda.

Dr. Gunaratna has called for a ban on segregation of all kinds and prevent ghettoization at the root. “Ethnically and religiously mixed schools, mixed residential localities and multi-ethnic provinces should replace the existing ethnic and religious segregation in these areas. The demand for mono-ethnic or mono-religious territorial units should be rejected,” he said.
In Singapore, where he lives, the government insists that residential flats are multi-ethnic, with Chinese, Malays and Indians living together cheek by jowl.

“A ‘Harmony Act’ on the line of the 1992 Singapore Act is a dire necessity in Sri Lanka. It will criminalize hate speech and hate propaganda. If the ‘Harmony Act’ was there, the hate speech and radicalization preached by Zahran would have been curbed long ago, the youth would not have been radicalized to this extent, and the bombings would not have taken place,” Dr. Gunaratna said. He said religious preachers of all religions should be registered, monitored and controlled. They should be licensed for two years at a time.

A South Asian diplomat pointed out that in 100% Islamic Maldives and Turkey, Imams are told what to say in their sermons. In Turkey the line is given every week before the Friday prayers.

The typical Sri Lankan Muslim is a most peaceful person, co-existing with other communities as a trader and following a beautiful form of Islam

Fortunately, only a tiny fraction of Sri Lankan Muslims are influenced by such wile preaching. “The typical Sri Lankan Muslim is a most peaceful person, co-existing with other communities as a trader and following a beautiful form of Islam,” Dr. Gunaratna said. “Our people are far away from organizations like the National Thowheed Jamaat”, said Hilmy Ahamad of the Muslim Council of Sri Lanka.

And Sufi leader H.M.Ameer of the Badriya Jumma Mosque in the all-Muslim town of Kattankudy said that only 150 people would have been following Zahran, leader of the Easter Sunday bombing squad.

Ameer, Ahamad and the ACJU had complained about Zahran’s preaching to the police and other authorities including the Defence Ministry. Ameer had even filed a case against Zahran. But all this was of no avail because the government did not take the threat from the Thowheed Jamaats seriously.