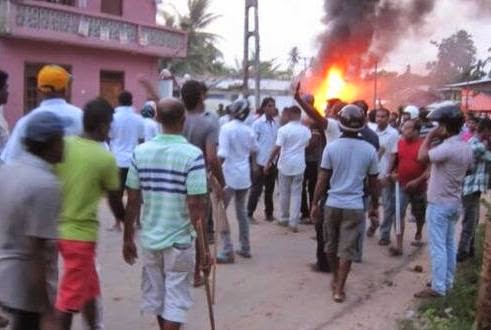 The UN High Commissioner for Human Rights Navi Pillay expressed her deep alarm at inter-communal violence taking place in south-western Sri Lanka in which two, or possibly three, people have reportedly been killed and scores injured.
The violence erupted on Sunday 15 June in the town of Aluthgama following a large rally of the Buddhist group Bodu Bala Sena (BBS) to protest an alleged assault a few days earlier by a Muslim youth against the visiting monk at the local temple.
After the rally, violence erupted on both sides as the BBS and supporters moved in procession through Muslim neighbourhoods, allegedly chanting anti-Muslim slogans. Homes, shops and mosques were reportedly attacked and some set ablaze. Despite a curfew and deployment of approximately 1,200 police, violence apparently continued into the night.
“The Government must urgently do everything it can to arrest this violence, curb the incitement and hate speech which is driving it, and protect all religious minorities,” the High Commissioner said.
“I am very concerned this violence could spread to Muslim communities in other parts of the country,” Pillay continued. “The authorities must immediately bring the perpetrators of such attacks to book and make it clear to the religious leadership on both sides, and to political parties and the general public, that there is no place for inflammatory rhetoric and incitement to violence.”
“At the same time, the security forces must use appropriate measures to contain the situation and ensure this tragic situation is not compounded by any excessive use of force,” she added.
During her visit to Sri Lanka in August 2013, and in her subsequent reports to the Human Rights Council, the High Commissioner warned about the rising level of attacks against religious minorities and the incitement of violence by Sinhala Buddhist nationalist groups. The Government had promised amendments to enhance existing provisions of the Penal Code and ICCPR Act with regard to hate speech, but these have yet to be adopted.
The Human Rights Council in March 2014 expressed its alarm at the significant surge in attacks against members of religious minority groups in Sri Lanka, including Hindus, Muslims and Christians. (Colombo Gazette)
Share
Facebook
Twitter
WhatsApp
Pinterest
Email