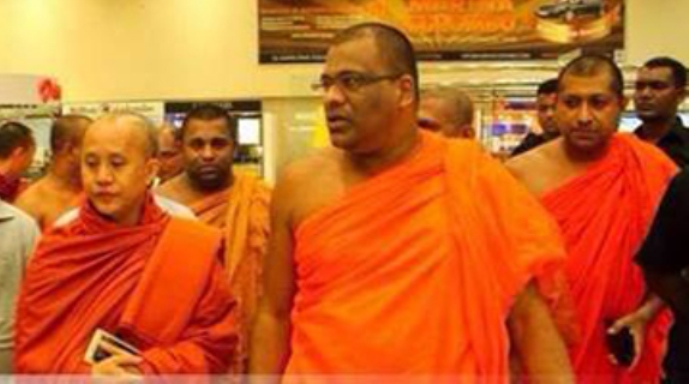 Sri Lanka’s main Buddhist nationalist group on Saturday announced it will host a radical cleric from Myanmar who is accused of fanning religious tensions, at a convention which is already attracting opposition from minority Muslims. 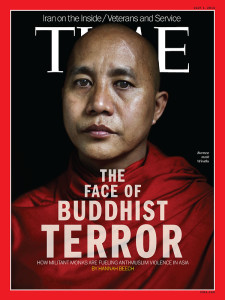 Sri Lanka’s hardline Bodu Bala Sena (BBS) or Buddhist Force, which has been accused of instigating hate attacks on the island, said the Mandalay-based monk Wirathu would be an honoured guest at its convention in Colombo on Sunday.

The BBS said Muslim and Catholic groups were trying to block Wirathu’s visit.

“Racists, extremists and fundamentalists are trying to undermine our international convention,” the group said in a statement.

Violence against Muslims in Buddhist-majority Sri Lanka has increased in the last two years, with hardliners attacking dozens of mosques, shops and homes.

The country suffered its worst religious violence in decades this June when riots broke out in the resorts of Aluthgama and Beruwala, leaving four people dead.

The BBS has been accused of instigating a string of attacks against mosques, Christian churches and Muslim-owned businesses. The government has denied tacitly supporting the BBS.

The Muslim Council of Sri Lanka had warned the authorities that allowing Wirathu to visit “would pose a serious threat to peace in our beloved motherland”.

The BBS has links with Wirathu’s nationalist 969 movement. BBS leader Galagodaatte Gnanasara has been compared to Wirathu, who has been accused of ratcheting up tensions between Buddhists and Muslims in his own country.

Gnanasara has described both of them as “peaceful monks with no blood on our hands”.

In Myanmar, Buddhist-Muslim clashes have left at least 250 people dead and tens of thousands displaced since fighting broke out in Myanmar’s western state of Rakhine in 2012

Extremism Rises Among Myanmar Buddhists
By THOMAS FULLER
Published: June 20, 2013
TAUNGGYI, Myanmar — After a ritual prayer atoning for past sins, Ashin Wirathu, a Buddhist monk with a rock-star following in Myanmar, sat before an overflowing crowd of thousands of devotees and launched into a rant against what he called “the enemy” — the country’s Muslim minority.

“You can be full of kindness and love, but you cannot sleep next to a mad dog,” Ashin Wirathu said, referring to Muslims.

“I call them troublemakers, because they are troublemakers,” Ashin Wirathu told a reporter after his two-hour sermon. “I am proud to be called a radical Buddhist.”

The world has grown accustomed to a gentle image of Buddhism defined by the self-effacing words of the Dalai Lama, the global popularity of Buddhist-inspired meditation and postcard-perfect scenes from Southeast Asia and beyond of crimson-robed, barefoot monks receiving alms from villagers at dawn.

But over the past year, images of rampaging Burmese Buddhists carrying swords and the vituperative sermons of monks like Ashin Wirathu have underlined the rise of extreme Buddhism in Myanmar — and revealed a darker side of the country’s greater freedoms after decades of military rule. Buddhist lynch mobs have killed more than 200 Muslims and forced more than 150,000 people, mostly Muslims, from their homes.

Ashin Wirathu denies any role in the riots. But his critics say that at the very least his anti-Muslim preaching is helping to inspire the violence.

What began last year on the fringes of Burmese society has grown into a nationwide movement whose agenda now includes boycotts of Muslim-made goods. Its message is spreading through regular sermons across the country that draw thousands of people and through widely distributed DVDs of those talks.

Buddhist monasteries associated with the movement are also opening community centers and a Sunday school program for 60,000 Buddhist children nationwide.

The hate-filled speeches and violence have endangered Myanmar’s path to democracy, raising questions about the government’s ability to keep the country’s towns and cities safe and its willingness to crack down or prosecute Buddhists in a Buddhist-majority country. The killings have also reverberated
in Muslim countries across the region, tarnishing what was almost universally seen abroad as a remarkable and rare peaceful transition from military rule to democracy.

In May, the Indonesian authorities foiled what they said was a plot to bomb the Myanmar Embassy in Jakarta in retaliation for the assaults on Muslims.

Ashin Wirathu, the spiritual leader of the radical movement, skates a thin line between free speech and incitement, taking advantage of loosened restrictions on expression during a fragile time of transition. He was himself jailed for eight years by the now-defunct military junta for inciting hatred. Last year, as part of a release of hundreds of political prisoners, he was freed.

In his recent sermon, he described the reported massacre of schoolchildren and other Muslim inhabitants in the central city of Meiktila in March, documented by a human rights group, as a show of strength.

“If we are weak,” he said, “our land will become Muslim.”

Buddhism would seem to have a secure place in Myanmar. Nine in 10 people are Buddhist, as are nearly all the top leaders in the business world, the government, the military and the police. Estimates of the Muslim minority range from 4 percent to 8 percent of Myanmar’s roughly 55 million people while the rest are mostly Christian or Hindu.

But Ashin Wirathu, who describes himself as a nationalist, says Buddhism is under siege by Muslims who are having more children than Buddhists and buying up Buddhist-owned land. In part, he is tapping into historical grievances that date from British colonial days when Indians, many of them Muslims, were brought into the country as civil servants and soldiers.

The muscular and nationalist messages he has spread have alarmed Buddhists in other countries.
The Dalai Lama, after the riots in March, said killing in the name of religion was “unthinkable” and urged Myanmar’s Buddhists to contemplate the face of the Buddha for guidance.

Phra Paisal Visalo, a Buddhist scholar and prominent monk in neighboring Thailand, says the notion of “us and them” promoted by Myanmar’s radical monks is anathema to Buddhism. But he lamented that his criticism and that of other leading Buddhists outside the country have had “very little impact.”

“Myanmar monks are quite isolated and have a thin relationship with Buddhists in other parts of the world,” Phra Paisal said.

One exception is Sri Lanka, another country historically bedeviled by ethnic strife. Burmese monks have been inspired by the assertive political role played by monks from Sri Lanka’s Sinhalese majority.

As Myanmar has grown more polarized, there have been nascent signs of a backlash against the anti-Muslim preaching.

Among the most disappointed with the outbreaks of violence and hateful rhetoric are some of the leaders of the 2007 Saffron Revolution, a peaceful uprising led by Buddhist monks against military rule.

“We were not expecting this violence when we chanted for peace and reconciliation in 2007,” said the abbot of Pauk Jadi monastery, Ashin Nyana Nika, 55, who attended a meeting earlier this month sponsored by Muslim groups to discuss the issue. (Ashin is the honorific for Burmese monks.) Ashin Sanda Wara, the head of a monastic school in Yangon, says the monks in the country are divided nearly equally between moderates and extremists.

He considers himself in the moderate camp. But as a measure of the deeply ingrained suspicions toward Muslims in the society, he said he was “afraid of Muslims because their population is increasing so rapidly.”

Ashin Wirathu has tapped into that anxiety, which some describe as the “demographic pressures” coming from neighboring Bangladesh. There is wide disdain in Myanmar for a group of about one million stateless Muslims, who call themselves Rohingya, some of whom migrated from Bangladesh.

Clashes between the Rohingya and Buddhists last year in western Myanmar roiled the Buddhist community and appear to have played a role in later outbreaks of violence throughout the country. Ashin Wirathu said they served as his inspiration to spread his teachings.

The theme song to Ashin Wirathu’s movement speaks of people who “live in our land, drink our water, and are ungrateful to us.”

“We will build a fence with our bones if necessary,” runs the song’s refrain. Muslims are not explicitly mentioned in the song but Ashin Wirathu said the lyrics refer to them.

Pamphlets handed out at his sermon demonizing Muslims said that “Myanmar is currently facing a most dangerous and fearful poison that is severe enough to eradicate all civilization.”

Many in Myanmar speculate, without offering proof, that Ashin Wirathu is allied with hard-line Buddhist elements in the country who want to harness the nationalism of his movement to rally support ahead of elections in 2015. Ashin Wirathu denies any such links.

But the government has done little to rein him in. During Ashin Wirathu’s visit here in Taunggyi, traffic policemen cleared intersections for his motorcade.

Once inside the monastery, as part of a highly choreographed visit, his followers led a procession through crowds of followers who prostrated themselves as he passed.

Ashin Wirathu’s movement calls itself 969, three digits that monks say symbolize the virtues of the Buddha, Buddhist practices and the Buddhist community.

Stickers with the movement’s logo are now ubiquitous nationwide on cars, motorcycles and shops. The movement has also begun a signature campaign calling for a ban on interfaith marriages, and pamphlets are distributed at sermons listing Muslim brands and shops to be avoided.

In Mawlamyine, a multicultural city southeast of Yangon, a monastery linked to the 969 movement has established the courses of Buddhist instruction for children, which it calls “Sunday dhamma schools.” Leaders of the monasteries there seek to portray their campaign as a sort of Buddhist revivalist movement.

“The main thing is that our religion and our nationality don’t disappear,” said Ashin Zadila, a senior monk at the Myazedi Nanoo monastery outside the city.

Yet despite efforts at describing the movement as nonthreatening, many Muslims are worried.
Two hours before Ashin Wirathu rolled into Taunggyi in a motorcade that included 60 honking motorcycles, Tun Tun Naing, a Muslim vendor in the city’s central market, spoke of the visit in a whisper.

“I’m really frightened,” he said, stopping in midsentence when customers entered his shop. “We tell the children not to go outside unless absolutely necessary.”
Courtesy:The New York Times