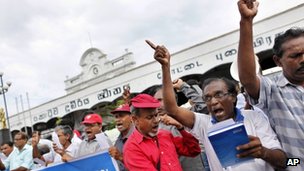 Human rights activists in Sri Lanka say the government must seek UN help in investigating serious violence in jails which has resulted in the deaths of two Tamil prisoners.

The second inmate died last week after more than a month in a coma. Activists blame the deaths on the government.
But officials deny responsibility.
The violence in late June started when about 30 prisoners suspected of links with Tamil Tiger rebels took three guards hostage.

The ensuing siege lasted for 19 hours before it was broken.
Civil rights activists say the inmates were then assaulted by prison authorities both before and after their transfers to other jails.

One prisoner, Ganesan Nimalaruban, died a few days later while another, Mariadas Dilrukshan, succumbed to his injuries after several weeks in a coma.
‘Brutal’ treatment
A group of 28 human rights activists have now issued a statement blaming the government for his death, which they say was caused by torture.

“We, the civil society, have lost confidence in domestic mechanisms in being able to deal with such situations,” they write.

They call on the government to appoint an inquiry commission under the control of the UN’s Office of the High Commissioner for Human Rights.

The BBC was unable to reach the head of Sri Lanka’s prison service for comment. A police spokesman declined to react, saying a post-mortem on Mr Dilrukshan was pending.

The government said earlier that Mr Nimalaruban died from a heart attack.
Opposition activists have demonstrated in the northern city of Jaffna, where Mr Dilrukshan’s funeral took place on Saturday.

They shouted slogans such as “Don’t kill Tamils!” and “Arrest the killers of political prisoners!”
Reports say that until Mr Dilrukshan was seriously injured in June, his parents had had no clue as to his whereabouts since his arrest several years earlier.

Tamil lawmaker V Anandasangaree described the treatment of the prisoners as “very brutal and far beyond justification”.

Media coverage of the episodes has highlighted Sri Lanka’s ethnic faultlines.
Sinhala-language media have tended to describe the prisoners as “terrorists”, while Tamil-language outlets have termed them “political prisoners”.
By Charles Haviland BBC News, Colombo