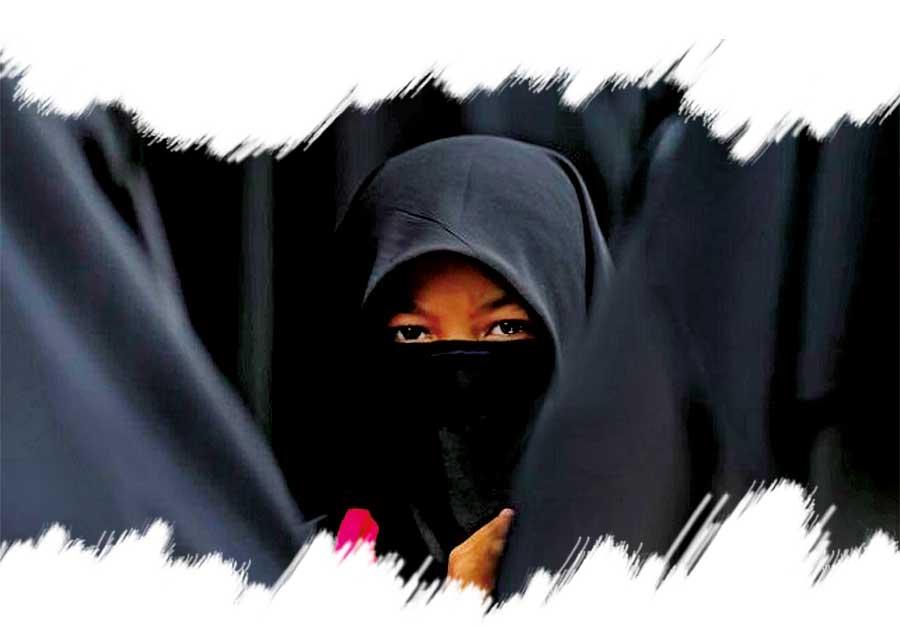 The current controversy comes at a time when some of us have been fighting, in court rooms and various local and international platforms, against several autocratic, oppressive and anti-minority measures implemented by this government.

We are continuously told, each time, that it is not the right time. Then tell us, when is the right time? How many more children and adolescents need to be savaged by this system?

Many of my human rights colleagues tell us now that this is not the right government to ask for such reforms. This is the same argument that many misogynist and elite Muslim men tell us whenever we talk about MMDA reform.

The struggle for reform has taken place across at least four successive regimes starting from Chandrika Kumaratunge. We are continuously told, each time, that it is not the right time. Then tell us, when is the right time? How many more children and adolescents need to be savaged by this system? How many more women need to be unfairly punished and thrown onto the streets to beg and children enrolled in madrasas that only teach to memorize the Quran. Now especially is not the time for silence.

Unfortunately, women fighting for reforms of the MMDA have also stayed silent about vociferous attacks they have been forced to endure for years. This is particularly because of Muslim men, and even some Muslim women, who are attempting to portray the MMDA reforms as the sole agenda of a racist government. They conveniently deny or refuse to recognise the long and arduous Muslim women’s rights struggle, particularly that of the victims of the MMDA and the Quazi system. They neither acknowledge the long-drawn struggle nor are interested in evaluating what needs to be done to reform. They seem to be unconcerned by the fact that if corrective measures are not taken now, we run the risk of losing the MMDA altogether.

The arrogance and egoism of certain ‘learned’ Muslims, the militancy of various groups, the thuggery and obstinacy of ACJU and politicians seeking personal gains are the reasons why MMDA is not reformed to date.

Many colleagues who advocated for reform and brought out the voices of suppressed victims were targeted for revenge by the National Tawheed Jamat (NTJ) and Sri Lanka Tawheed Jamat (SLTJ) in 2016 and 2017. These attacks escalated after they gave testimony before Lal Wijenayake’s public consultative committee on constitutional reform and to parliament oversight and sub-committees.

A colleague in the East who collected statistics on child marriages within the Muslim community was hushed by local mullahs and a person called Rilwan – who turned out to be one of the Easter Sunday suicide bombers.

A member of the NTJ in a video bayan (sermon) called upon the Muslim youth in Puttalam to teach ‘proper Islam’ by killing one of my colleagues and me for the crime of going before parliamentary committees and pleading for the rights of women and children[1]-– supposedly already guaranteed under the constitution.

The SLTJ on 3rd November 2016 brought people in bus loads and staged a protest in front of the Fort railway station against minimum age of marriage being made a condition for attaining the EU’s GSP+ trade benefits[2].  In that protest, SLTJ secretary Abdul Razik named women’s groups and called them western stooges and traitors.

A colleague in the East who collected statistics on child marriages within the Muslim community was hushed by local mullahs and a person called Rilwan – who turned out to be one of the Easter Sunday suicide bombers.  These groups resorted to intimidation and thuggery against moderate and reformist women and Muslims who had alternative views. Our complaints were ignored by politicians and authorities. Even now, many Muslim men and some Muslim women are spiting venom on reformists and preaching ideas that are eerily similar to what these radical groups preached during later part of 2016 and early days in 2017.

I ask women from other faiths to look into this issue carefully. Your Muslim sisters need you at a time not only when we are fighting for our own liberation but also when we are trying to protect others by telling the truth.

The continued oppression of Muslim women through an unreformed MMDA and Quazi system is a manifestation of the entrenched patriarchy and male chauvinism in the Muslim community. Trotted out phrases one hears against reforms – that are ‘for protection of women’, “difficult for our women” and “our women have to mingle with others (if administration of reformed MMDA is brought under regular justice system)” – reveals a mindset that treats Muslim women as inanimate objects that can’t have an existence of their own.

Those opposing reforms have no rational justification. This continued refusal to treat women as equals as decreed by Islam emanates from cultural not religious sources, and from their own insecurity of women becoming empowered.  In that backdrop their demand for equal treatment of Muslims and privileges from the state sounds hollow and hypocritical.

The dissemination of fake news and false information on the proposed MMDA reforms are on the increase, along with attempted intimidation of women fighting for reforms.

Leader of the Sri Lanka Muslim Congress, Mr. Rauff Hakeem goes on to label those in support of the reforms as extremists! Such must be his political bankruptcy.

On the 16th September 2021, speaking at the commemoration of the founding leader of the Sri Lanka Muslim Congress, Mr. Rauff Hakeem, MP claimed that the current reform proposals are to abolish the foundation of the MMDA. He must have meant the stated proposal to abolish polygamy and Quazi system. He goes on to label those in support of the reforms as extremists! Such must be his political bankruptcy. Mr. Hakeem was the Minister of Justice for four years from 2010 to 2014. During his tenure as Justice Minister and even thereafter, several women’s groups, including affected women, explained their suffering in numerous meetings with him. They continuously engaged with him while he disingenuously assured them his support for reform. However, except for occasional pontifications and sanctimonious posturing in support of reform, there is nothing to show that he did anything to promote reforms to the MMDA. On the contrary, he has conveniently aligned with the obstructionist ACJU and has taken cover behind them.

It was Muslim women who provided early warnings to the then Prime Minister’s Office about Zaharan, before his group carried out their barbarous attacks.

Mr. Hakeem recently acknowledged that in February 2019 the then Prime Minister’s spouse had asked him about Zaharan and disturbing reports she had received of his increasingly violent militancy. While Mr Hakeen did not reveal his response nor what action he took, at a time when he was a powerful minister, he also failed to acknowledge that it was Muslim women who provided early warnings to the then Prime Minister’s Office about Zaharan, before his group carried out their barbarous attacks. This may have been because he dismissed this whistle blowing from women on the basis that it was not of evidentiary value.

Currently there seems to be a convergence of anti-reformists against much needed reforms of the MMDA. On the 19th September 2021, a group calling itself “Muslims Youth Islandwide” held their second virtual meeting online, after much criticism on social media of them having only male panellists at their first meeting related to the cabinet decision. Instead of raising awareness and providing a neutral space for diverse views on a critical topic of national interest, the group was steadfast against the proposed reforms.

Their conduct and behaviour towards women panellists and others who held dissenting views depict the amount of religious intolerance within some young people. They allowed their chosen extremist men to intimidate and be uncouth while cutting short and keeping the female panellists’ microphones switched off irrespective of their repeated messages to unmute them.

They promoted radical views to defend polygamy and the Quazi system and denied participation to others. It is hypocritical to hold a hegemonic state accountable for anti-Muslim policies when one does not treat Muslim women equally and refuses to be tolerant towards them. This group’s persuasion of an exclusionary ideology coupled with openly intolerant and aggressive masculinity is a matter of concern as it will feed extremism on all sides. The Muslim community must be vigilant to nip any form of extremism in the bud to avoid further radicalisation disaster.

There are false claims that polygamy and abolition of the Quazi system have not been part of the reform debate. In fact, both were deliberated over 9 years at length and dealt with in the report of Justice Saleem Marsoof Committee’s (JSM). In fact, there was unanimous agreement and recommendation in the JSM Committee’s report to amend the MMDA to elevate the institution of Quazi as an integral part of the Sri Lankan Judiciary with the reduction of the number of Quazis to be decided by the Judicial Service Commission[3].

Controlling women is the first step towards radicalizing a community. It is imperative that while defending the rights of the minorities from the majoritarian state, we also continue to raise critical issues about gender discrimination within the community.

After the horrific Easter Sunday bombings, national security took centre stage. The Parliamentary Oversight Committee on National Security of the last Parliament, which had two SLMC parliamentarians, identified the MMDA as a law that has bearing on national security. The Committee unanimously recommended that the MMDA should be amended and went as far as identifying areas of reform. It further recommended that the MMDA should be brought under the purview of the District Court.[4] It would do well to assess and evaluate matters mentioned therein and to deal with it as constitutionally as possible rather than arousing the sentiments of the community on false pretexts.

Any manifestation of violence claiming allegiance to faith, be it ISIS, Boko Haram, The Lord’s Resistance Army, RSS, Bajrang Dal, Rashtriya Swayamsevak Sangh, Al-Qaida, Al-Shabaab or The Army of God has begun by targeting its extremist politics on women and children. Controlling women is the first step towards radicalizing a community. It is imperative that while defending the rights of the minorities from the majoritarian state, we also continue to raise critical issues about gender discrimination within the community to avoid playing into the hands of radical elements and racist politicians espousing the dangerous myth of ‘one country one law’.