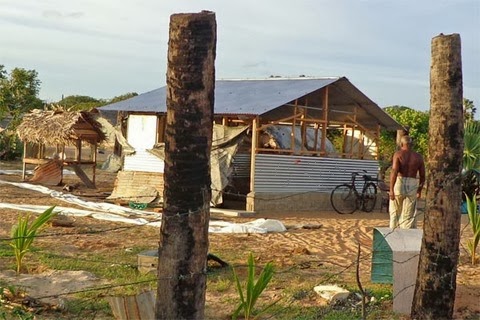 Vimal Rasenthiran and M. Vasanthan
World Socialist Web Site reporters recently visited Mullaivaikkal in the Vanni area of Sri Lanka’s Northern Province. The region is where the government military staged the final attacks on the separatist Liberation Tigers of Tamil Eelam (LTTE) that ended the island’s long-running civil war in May 2009.

The LTTE prevented residents leaving the area during the conflict and as government troops advanced on the coastal strip, hundreds of thousands of people were trapped. An expert committee appointed by the UN estimated that at least 40,000 people were killed in indiscriminate military attacks on defenceless men, women and children. Around 300,000 fleeing civilians were eventually forced into Vavuniya and incarcerated in the army-controlled detention camps at Manik Farm. The last group of Mullaivaikkal residents were only allowed back into the area in May 2012.

The SEP reporting team visited the area a week before the September 21 Northern Provincial Council elections. During the campaign there was constant propaganda about the rehabilitation of resettled people in the Vanni area. The government claimed that residents were now thriving, having resumed agricultural work—but anyone travelling the 60 kilometres from Parnthan, near Kilinochchi, to Mullaivaikkal, could not fail to notice the difference between the official rhetoric and the social reality facing thousands of local residents.

Outside the area’s small towns, scattered settlements featured tiny, poorly-built huts inhabited by the resettled residents. The shoddy huts stood in stark contrast to newly-renovated road from Puthukkudiyiruppu. The road will be extended to Mullaithivu and connect to another road from the east. The construction is aimed at international and local investors, which the government hopes will be attracted to the area.

There are at least seven large army camps along the 60-kilometre road. The camps have been established on several acres of formerly civilian-owned land that has been acquired by the military. There could be farms behind these camps because the military is now involved in cultivating the land and clearing jungle. Armed soldiers on bicycles intermittently patrol these areas.

Some families have not been able to return to their homes and there are over 200 families still at the Puthukkudiyiruppu transit settlement. The government discontinued food subsidies for all resettled people six months ago, including those at the transit settlement. Most people are unemployed and find it difficult to find three meals a day.

A Mullaivaikkal farmer still living at the Puthukkudiyiruppu settlement told the World Socialist Web Site: “We came to this area in 2011. The government forcibly settled us here because they wanted to keep the whole of Mullaivaikkal under military control.”

Each relocated family has been given a half an acre of forest land, an indication that the government may not allow them to return to their original homes.

The farmer explained: “We cleared the forest and have settled here. We have spent our energy and our money on this land but we don’t have a job here. To farm we need water supply facilities. We have to dig a deep well to get water and that will cost nearly 200,000 rupees ($US1,535), a water pump costs about 50,000 rupees. The government has dumped us here but it doesn’t help us.”

He said that scores of people had died in his village, including eight close relatives, and that the five-acre village cemetery was filled with the dead bodies. Many people were “disappeared,” he added, a reference to the activities of pro-government death squads.

Voicing his distrust of the UN, he said: “[UN High Commissioner for Human Rights] Navi Pillay came to our village and lots of people complained to her about the disappearances and the army arrests. She promised to take action but I don’t think she will do anything. During the war the LTTE tried to pacify us, saying that the ‘international community’ would rescue us, but nothing happened.”

Pillay visited Sri Lanka in August, after the UNHRC passed a US-sponsored resolution on human rights situation in Sri Lanka. The US resolution has nothing to do with defending human rights, but is aimed at reasserting Washington’s strategic influence in the Asian region.

Another Mullaivaikkal resident said: “The government spends millions of rupees on the provincial council election campaign and builds roads and establishes bank branches but does nothing to improve basic conditions of life of the people. Namal Rajapakse, the president’s son and an MP, came to Mullaithivu by helicopter with armed guards and asked us to vote for their party. Why should we do so? Four years have passed since the war. What have they done for us?

“We are struggling just to find our daily meals. We are not even allowed to collect the scrap metal of destroyed vehicles and sell it for food. This is for private contractors. Recently some people collected iron rods and other scrap but this was forcefully confiscated from them by the army. Those who resisted were assaulted. So what right do they have to ask vote for them?”

Other residents explained how the LTTE had alienated local residents by forcibly recruiting under-age youth into their ranks.

A young mother, now 24-years-old, was forced to end her studies and marry to avoid LTTE conscription. “The final war in our area created immense difficulties for us,” she said. “There are no words to describe it. The security forces were shelling civilians indiscriminately and thousand died in front of us. We were running over the dead bodies. Fortunately we survived and were re-born.”

She explained that her family was also harassed by the LTTE. Her younger brother was only 15 when he was conscripted by the LTTE, but he ran away five times. When she opposed the LTTE taking her brother away the last time, they shot her in the leg and her brother was arrested. The people’s opposition to this sort of activity was one reason for the LTTE’s defeat, she added.

“I’m going to vote for the TNA [Tamil National Alliance] in the coming election to show that our problems are still not resolved,” she explained. “But I don’t have any faith in the TNA. After the election they won’t care for us. They’re living a luxury life.”

A carpenter who was wounded in the army shelling and had his hand amputated said: “We lost everything during the war. My house had been looted by the military and we don’t have any money to repair it. We are now living in a small hut but during the rainy season water pours inside it.

“Without my hand I can’t work anymore. I used to earn 1,500 rupees per day. My wife is doing odd jobs and she earns 200 or 300 rupees a day. We, including our daughter, have to try and live on this small sum.”

A former fisherman told the WSWS that after surrendering to the army he was told that he would be released within a year because he was married. “But they detained me for three years,” he said. “And after my release, nobody helped me. During the war my house was destroyed. I work here for 700 rupees a day. With this wage how can I build my house?
2 October 2013
WSWS