Sri Lanka MPs creating their own NGOs as charity foundations 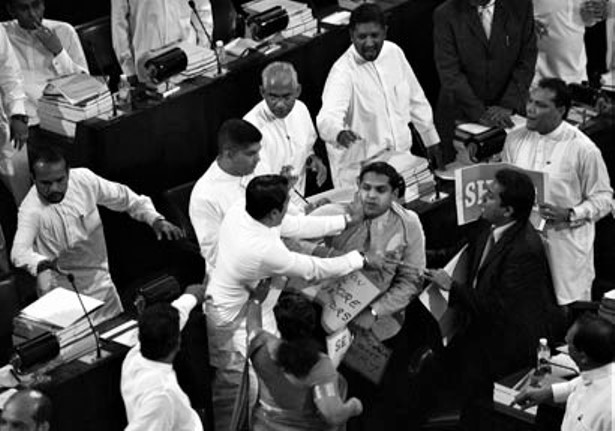 ( Assaulting opposition members in the parliament under Rajapaksa rule)

Several sitting MPs and some former MPs have had bills presented to the legislature to incorporate as Acts of Parliament foundations,  set up in their names reports the Sunday Times. These foundations are non other than NGOs which may have charity organizations.  Once they obtain charity status by incorporating as foundation they can receive tax deductible donations from the wealthy.

According to the Sunday Times the bills number of  bills  have been presented  for the incorporation of foundations in recent times. They are   the S. B. Nawinna Foundation, Sisira Jayakody Siyapatha Foundation, Rajitha Senaratne Foundation, Arundika Fernando Relief Services and Godfrey Fernando Memorial Foundation, Hizbullah Foundation, Susantha Punchinilame Foundation, Roshan Ranasinghe Janasahana Foundation and the Sujeewa Senasinghe Foundation. There are also bills pending to set up foundations in the name of two late MPs — Bertie Premalal Dissanayaka and M.K.D.S. Gunawardena.

The objectives of all the foundations are welfare activities for people of their respective electorates but once approved by Parliament they are also allowed to raise funds and engage in other activities.

– with the inputs from Sunday Times