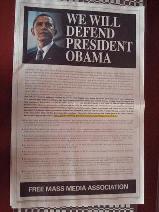 The advertisement reproduced in full below, sought to place in perspective the rationale behind Sri Lanka being questioned for eliminating terrorism in its backyard. The United Nations Expert Panel appointed by the Secretary General, had five findings against Government of Sri Lanka. Sri Lanka rejected the report, called it the Darusman report
(after the panel head, Marzuki Darusman, former Attorney General, Indonesia), refused to respond to points raised in the report, and said that it would highlight post-war progress to the U.N. and other bodies. After the release of the UN Report on April 25, Sri Lankan media, which united against the report, had carried a full-page advertisement, questioning the panel and the UN Secretary General

This full-page advertisement, released by ‘Free Mass Media Association’ was captioned “We will defend President Obama.”

The advertisement said: “On Monday, 2nd May 2011, United States President Barack Obama declared that Al-Qaeda leader Osama Bin Laden was killed in Pakistan. Hearing the news, people of the U.S. erupted in jubilation. Their relief is such, that the celebrations are likely to last for weeks, if not years. The U.S. military and intelligence agencies are to be complimented for accomplishing their mission. President Obama deserves credit for having led the U.S. “war on terror” with a steel resolve to win, without trying to live up to Nobel Peace Prize expectations. The US demonstrated that in dealing with terrorists who threaten its security and the safety of their people, it believes in the use of sheer force to destroy them. In fact, in its hunt for Bin Laden, the U.S. left Afghanistan “bombed into the stone age” and Iraq pulverized with nearly a million people killed on the controversial search for non-existent “weapons of mass destruction.”

“That is why it is not surprising that Bin Laden was supposedly shot in a “firefight,” where 20 plus persons were killed, but no American combatants were harmed in any way!

“But now, the world is anxiously waiting as to what may happen next. Based on recent developments in other countries, it is possible that President Obama may now be getting nervous about the possible fallout arising from the lobbies and interventions of Bin Laden/Al-Qaeda linked groups who may quickly assume a new cloak of human rights defenders, accountability experts, transparency activists and the like. In that context, the International Accountability Network is concerned that the aforementioned defenders, experts and activists may attempt to persuade and coerce Mr.Ban Ki-Moon and other U.N. human rights organisations to intervene in order to condemn and discredit President Obama and the U.S.A for what was done to deal with Bin Laden and his associates. Therefore, we are making this urgent plea to Mr.Ban Ki-Moon, his “expert” groups and others, not to ask the following questions from President Obama or the U.S.A.: (Emphasis not added: highlighted in the advertisement).

“Could Bin Laden have been captured, without being killed? Was it absolutely necessary that all who were with him had to be killed in the attack? Could it be that they were killed in order to ensure that there were no witnesses?

“Were the Foreign Ministers of Britain, France and Sweden, other leaders of the “International Community” and U.N. experts given an opportunity to visit the area where Bin Laden was hiding prior to the U.S. raid? Did any members of the U.S. Cabinet urge a humanitarian intervention to suspend or delay the attack so as to seek a “negotiated” settlement with Bin Laden?

“As has been recently suggested by U.N. experts in the case of other similar situations, will the U.S. people be advised to immediately stop celebrations of triumphalism in the U.S.?

“Will the tough anti-terror laws the U.S. adopted in the wake of the 9/11 attack, be scrapped forthwith? Will Homeland Security Act be immediately repealed?

“Will the dismantling of high security zones in Afghanistan take place immediately? Will there be a quick U.S. troop withdrawal from Afghanistan since the Al-Qaeda leader and most of his trusted lieutenants are now dead? Will Al-Qaeda activists and sympathizers who are now in custody in Guantanamo Bay and other locations be immediately released? Will those activists be pardoned and allowed to quickly get about their normal business in a spirit of reconciliation?

“Now that Bin Laden and senior Al-Qaeda leaders are no more, will their associates scattered around the world be now permitted to form a “Transnational Government”? Will the U.S. condone any possible action by the British Government to allow Al-Qaeda activists and/or sympathizers to demonstrate at the U.K. Parliament Square demanding that President Obama be arraigned on charges of war crimes?”
The Hindu