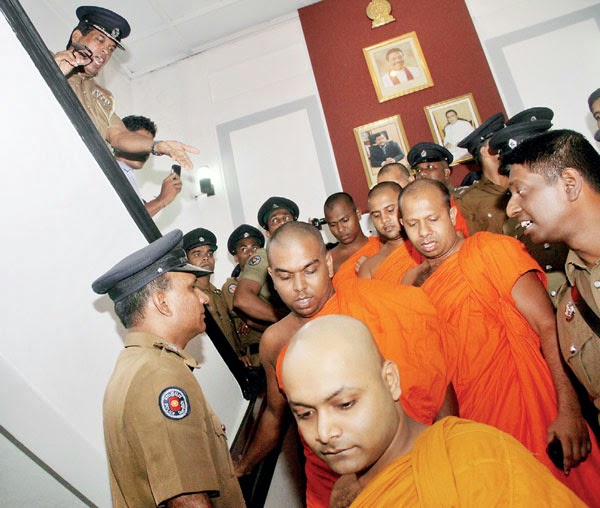 President Mahinda Rajapaksa has put the attack down to ‘public anger’ over the unjust attacks on the Government’s development projects in the area. The state controlled media has defended the assault as nothing more than democratic dissent, akin to pie-throwing against British MPs in the UK in protest at unpopular policy. This, in an age when bona fide civilian demonstrations are regularly disrupted using brutal Government force.

The guilt by association therefore, is inescapable.
In spite of the shocking scenes last Thursday, the Hambantota assault has had a curious effect on the main opposition party. The UNP presently functions under the stewardship of Karu Jayasuriya who is acting for Party Leader Ranil Wickremesinghe who is on a work-study sabbatical in Boston.
The five MPs came out all guns blazing about the incident at a press briefing on Sunday, laying blame squarely at the door of President Rajapaksa for the attack on democratically elected representatives of the people. Jayasuriya’s decision to attend the press briefing last Sunday had a dynamic impact on the five ‘fact-finders’ who noted privately that the presence of the party Leader, even one who holds the mantle only in an acting capacity, had strengthened their hand and their credibility.
From Attanagalla to Hambantota
No doubt unintentional on the part of the Government, the incident has spurred the UNP into action, with the party sensing it has somehow gained the upper hand and seriously exposed the Government’s bullying tactics. The main opposition party is now mulling a return to Mattala, a place the party is now claiming is ‘uncleared area’ that needs liberation from the regime’s stranglehold. Discussions are being held as to whether the party will move its May Day event to Hambantota and stage a ‘satyagraha’ in the area, or go back sooner to conduct a peaceful protest.
The Rajapaksa administration has a reactionary streak, likely to result in another showdown if the UNP carries its plan forward. That appears to be a calculation the main opposition party has already made.
The incident has rekindled political memory, with UNP members recalling that when President J.R. Jayewardene travelled to the Bandaranaike stronghold of Attanagalla in the 1970s as an Opposition MP, his delegation was set upon by political goon squads. The attack was reportedly defended by then Prime Minister Sirimavo Bandaranaike, leading Jayewardene to deliver a famous speech in Parliament in which he referred to the incident and the state reaction as the “Attanagalla Doctrine” to suppress political opposition.
Channelling the Jayewardene legacy, the UNP is seeking to portray the attack on opposition
Parliamentarians as President Rajapaksa’s own ‘Hambantota Doctrine’ aimed at controlling public discourse and stifling dissent in order to permit an untrammelled abuse of authority by the Government.
Saffron immunity
But whatever political advantage the UNP has espied, the triumph of mob rule casts long shadows upon Sri Lanka’s future. Afforded political patronage and immunity, unruly, terror-inflicting mobs now come in varying shapes and sizes.
Fresh from its pre-New Year raid on a joint press conference by the moderate monk leading the Jana Bala Sena – Watarekke Vijitha Thero, the Buddhist hardline Bodu Bala Sena group is on the rampage once more. On Tuesday, a large group of protestors laid siege to the Mahiyangana Pradeshiya Sabha where Vijitha Thero is a member, forcing the priest to flee the premises in a police vehicle, amidst fears he would be attacked by the demonstrators.
Yesterday, the Bodu Bala Sena took over the fight. Storming the Ministry of Industry and Commerce, headed by Minister Rishard Bathiudeen who has become the latest target of the hard-line group, five BBS monks combed the building for Vijitha Thero, claiming he was being granted refuge inside the premises.

The Bodu Bala Sena is accusing Minister Bathiudeen and the moderate monk, of conspiring to settle Muslims within the Wilpattu forest reserve. The brazen raid on a government ministry complex illustrates how much power and protection the group can command. Ministry officials meekly permitted the monks to search every room of the building, with the exception of Bathiudeen’s office, which only confirmed the group’s wild speculation that the monk was being protected by the Muslim Minister.

With the exception of a bizarre altercation with a vociferous police official inside the Ministry, yesterday’s story followed the familiar script. Bullies by nature, groups like the Bodu Bala Sena respond only to shows of force, and the monks were seen to back down and leave the premises after the arguments with the police officials got heated.
BBS General Secretary Galagodaththe Gnanasara was a conspicuous absentee at yesterday’s ministerial raid, now facing prosecution over his thuggish behaviour at the press conference at Nippon Hotel Colombo two weeks ago.
BBS: Unplugged
Predictably quiet during the UN Human Rights Council sessions in Geneva, it appears the BBS and its affiliates have been unleashed again to carry on its anti-minority, Sinhala supremacist campaign. The groups are threatening the fragile balance of ethno-religious relations in the country with their terror tactics, yet officially no one cares.
The passive patronage afforded to these groups by the incumbent administration reinforces perceptions among minority communities and the last of the country’s moderates and liberals that the Government is actively seeking an ethno-religious pogrom to rival July 1983. Rampaging mobs, once unleashed are not so easily recalled. The Sri Lankan State, aptly aided by the marauding saffron armies is so busy protecting Buddhism, the practice of the doctrine appears to have been entirely forgotten.
Using flimsy sections of the Penal Code, a magistrate yesterday deported a British tourist for sporting a tattoo of the Buddha on her right arm. Her crime, police said, was “hurting the religious feelings of others” even though the tourist, Naomi Coleman claimed to be a practicing Buddhist and the tattoo in no way distorted the image of the Buddha. The incident has already resulted in an updated travel warning by the United Kingdom, which only last week issued a fresh advisory to British citizens requesting travellers to be wary of the harassment and manipulation of tourists visiting Sri Lanka.
In the absence of genuine reconciliation and a tangible economic peace dividend, the Sri Lankan tourism boom has been an enduring post-war success story. Since the guns fell silent, visitors have flocked to the island in search of sun-kissed beaches and misty mountains.
Jeopardising tourism
Ironically, over the past month the Sri Lankan Government has actively jeopardised this success. First it announced a resurgence of terrorism in the north that has already brought about at least two negative travel advisories and will almost certainly drive maritime and aviation insurance premiums up, creating jitters in the shipping and leisure sectors.
With Coleman’s harassment and deportation, the Government has set in stone its growing intolerance of visitors to the island who fail to live up to Sri Lanka’s exacting standards when it comes to respecting the Buddhist tradition.

Impunity granted to marauding mobs, led by groups like the Bodu Bala Sena, makes the destination doubly risky for tourists, who may unwittingly become targets because of body-art or clothing that is deemed insensitive to local religious tradition.
In the Land of the Buddha, tolerance is becoming an increasingly rare virtue. Violence and intimidation are fast becoming rule rather than exception. If the Government really wants to root out terrorism, very soon now, it may have to start looking further south.