Once upon a time, Sri Lanka was at the forefront of South Asian trade liberalisation. Beginning in 1989, Sri Lanka made large reductions in import duties and by 2001, Sri Lanka’s average applied import duty was down to 9.1 percent compared to India’s 32 percent and Pakistan’s 20 percent.

Sri Lanka was also the prime mover in South Asian trade agreements with the Indo-Lanka Free Trade Agreement (FTA) of 2000. It would have also been the first in South Asia to enter a trade agreement covering services and investment had it stuck with the 2004 deadline set by the Joint Study Group for the Indo-Lanka Comprehensive Economic Partnership Agreement (CEPA).
All along economic analysts smiled upon these developments. Sri Lanka was seen as a beneficiary of its boldness.
Sri Lanka has changed direction
But that was the past. The times have changed and so have the economists (what came first?).
Sri Lanka still has the lowest average import duty in South Asia but the effective protection has been increasing. Ad hoc levies such as the special commodity levy, port and airport levy and import cess have been on the rise in the last decade.
The gaps are also narrowing. In 2011, the average import duty of Sri Lanka stood at 10.2 (higher than 2001 levels), India at 12.6 percent and Pakistan at 13.9 percent.
If that seems little bit odd, here is where it becomes downright puzzling. Free trade agreements with Asian countries have been dancing up in the last 10 years and Sri Lanka has been missing at the party.

World’s trade agreement party has moved to Asia
By the beginning of 2013, there were 546 World Trade Organisation (WTO)-notified trade agreements, of which 354 were in force and others being negotiated.  In the last 10 years, with nearly 100 operational agreements and another 150 under negotiations, Asia has surged to account for nearly half of the global trade agreements (see figure 2). 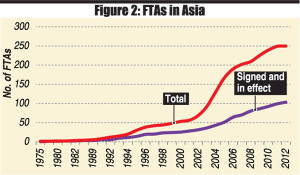 This proliferation of trade agreements is driven both by Asian economies trying to tap each other’s markets, as well as non-Asian economies, attempting to expand in Asia’s large and fast growing consumer markets. This means, Asia is fast closing in on the developed countries in terms of its share in global trade. By 2012, just six Asian countries accounted for nearly a quarter of global trade (see table 1). 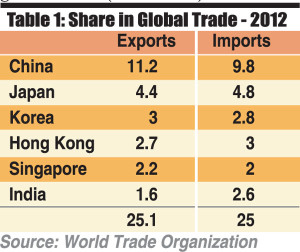 Sri Lanka is sitting out of party
Once a prime mover in terms of trade agreements, Sri Lanka is now getting left behind in Asia. It is only doing better than those classified as least developed countries (LDCs) in South Asia (see figure 1).
Since 2005, India has signed Comprehensive Economic Partnership Agreements with Singapore, ASEAN, South Korea, Japan and Malaysia. Many more are being negotiated. Overall, India has 13 agreements that are operational and 21 under negotiation. But the Indo-Lanka CEPA is on the backburner without a deadline.

Not having fun with trade
The puzzle deepens. Not only is Sri Lanka lagging behind in trade agreements, it is not getting much out of the agreements it has either.
Sri Lanka has five trade agreements that are operational and three agreements under negotiation. All of them are with Asian countries including India, South Korea and even China (see table 2).
Yet, the exports to these countries, other than India, are rather small. For example, as a percentage of total exports, Pakistan accounts for just 0.8 percent, Bangladesh 0.6 percent, Maldives and South Korea just 0.5 percent each and China 1.2 percent.
Even more discouraging to Sri Lanka is the fact that it imports heavily from Asia and exports so little (see table 3). Among the top ten countries from which Sri Lanka imports, eight are Asian countries and they account for 57 percent of total imports. But only 13 percent of Sri Lankan exports reach these same markets leading to a trade deficit with them that can be as high as US $ 10 billion. 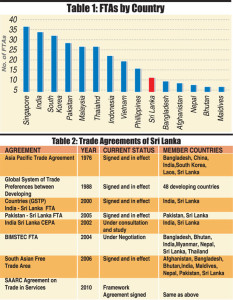 Why is Sri Lanka missing out?
There are two reasons why existing agreements have not delivered.
First is low coverage and limited depth of concessions of existing agreements (other than the agreement with India). APTA’s product coverage in which South Korea and China are members is poor and the preferential margin is low. The GSTP is even more restrictive than APTA both in terms of product coverage and concession levels. SAFTA has very long tariff phase out periods for LDCs and relatively large negative lists (see table 2).
Second, Sri Lanka’s trade agreements are still restricted to trade in goods. All recent agreements signed by both developed and developing countries go beyond trade in goods to cover a number of other areas such as services, investment, competition, intellectual property, etc. For example, to date, there are 117 agreements notified to the WTO covering both trade in goods and services.

Time to take stock
There can be good reasons to not liberalise trade. For instance, it can be important to protect vulnerable farming sectors and develop nascent industries. But there is no evidence that Sri Lanka’s direction change in trade liberalisation is resulting in such positive benefits. Sri Lanka has gone from prime mover in Asia to a laggard in trade agreements. Its export access to Asia (except India) is anaemic relative to its imports. What is the policy direction for trade and what are the positive benefits being pursued? The data says that it is time to take stock and re-evaluate.