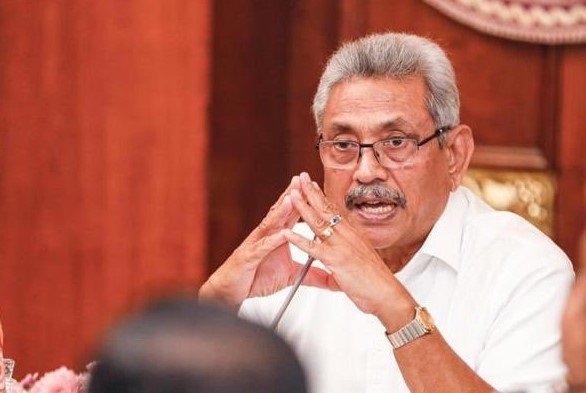 President Gotabaya Rajapaksa yesterday informed the United Nations Resident Coordinator Hanna Singer his government would give support to families of missing persons in order to continue with their lives, despite the Tamil Politicians’ objections.

Outlining his plans to address the issue of missing persons, President Rajapaksa explained that these missing persons are actually dead. Most of them had been taken by the LTTE or forcefully conscripted. The families of the missing attest to it. However, they do not know what has become of them and so claim them to be missing, the President’s Office said.

After the necessary investigations, President had said that steps would be taken to issue a death certificate to these missing persons. Afterwards their families would be given the support they need to continue with their lives.

“Tamil politicians would reject this solution, noted the President, as that would nullify their political agenda. However, this would help the affected families,” the President’s Office said in a statement.

As an immediate remedial action, he explained that his administration has opened up 100,000 jobs for the most marginalized communities in Sri Lanka. It is for the poorest of poor, who are either landless or lacking in any qualifications, skill or money to start up on their own. These would be unskilled jobs, but with necessary programs to train the youth after employment. The objective is to provide a steady income to this economically challenged sector by recruiting at least one member from each family.

Further to this program, another initiative to provide these families with dry rations at concessionary rates has also started, said the President.

Education is the other area of concern, noted the President. Free education existed in Sri Lanka even before Independence. However, due to lack of capacity at the secondary and especially at the tertiary levels bottlenecks have arisen. As a result, though nearly half of those who sit for Advanced Level exams qualify for university entrants, only a fraction gains admission.

As Sri Lanka has an exam based education system, every child studies hard to get through these exams. However, when they are unable to, they do not know the other options they can pursue. Therefore, steps are being taken to introduce skill based subjects from grade seven onwards. Those who do not gain entrance for university will then be encouraged to follow vocational or technical courses.

Currently, the science paper is deliberately designed to fail students. This will be changed to allow more students to pass in science subjects and to direct them to technical colleges, explained President Rajapaksa.

Ms Singer promised to connect the relevant UN agencies to help the Government of Sri Lanka in this regard and especially in technology transfer.

Speaking on measures to control climate change, President Rajapaksa outlined a number of programs already initiated. The youth is especially keen in this regard he noted. Clearing forests had been a longstanding issue by rural area farmers. The issue was further exacerbated when rain catchment areas were cleared for tea plantations. Though an effort was made in the late ‘70s to redress the problem, most unfortunately the trees that were planted were Cyprus and pine. This was a very wrong decision as these trees do not allow grass to grow beneath, leading to soil erosion, observed President.

On the subject of digitizing, President explained that to the ICTA a most capable team from chairman onwards has been appointed. The Ministry Secretaries had been directed to work with the ICTA so that the digitizing process is done in a coordinated manner, explained President. Again Ms Singer promised to help the Government by connecting with the relevant UN agencies and experts, the statement added.