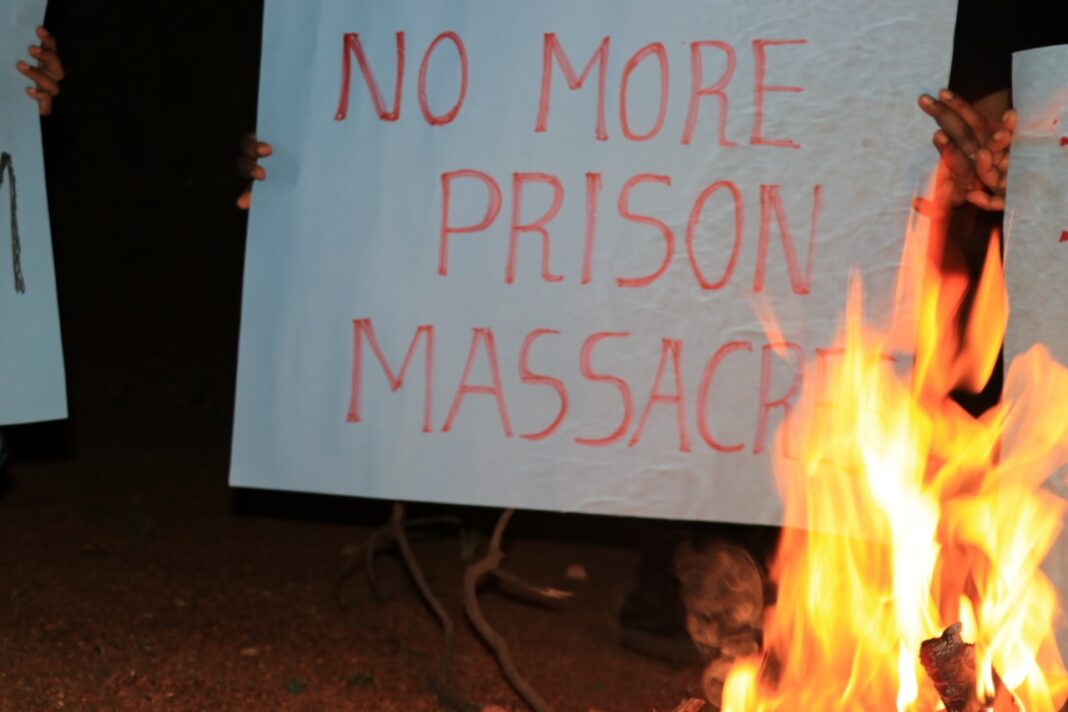 The family members of the Tamil political prisoners and PTA detainees, communities, civil
society groups and social activists in North and East Sri-Lanka are vehemently shocked by the ‍act of Lohan Ratwatte, the State Minister of Prison Management and Prisoner’s Rehabilitation.

Especially, the Prisons are the torturous and massacre spots of Tamil minority prisoners. Welikada massacre (1983), Kaluthara killings (1997) and Bindunuvewa massacre (2000) are some of the cases that came to mainstream.

On Sunday 12 September 2021, the state minister had forcibly entered (when he entered the prison, he was alcoholic) Anuradhapura prison along with his friends, summoned the Tamil political prisoners, made two of them to kneel down in front of him at gunpoint and threatened them that he would kill them on the spot. This incident created fear and helplessness among the families of Tamil political prisoners as well as among the entire Tamil community. At the ‍same time this occurrence was against the SriLanka constitution and laws of Prisoner’s rights

also (CHAPTER-III OF THE CONSTITUTION OF DEMOCRATIC SOCIALIST REPUBLIC OF SRI LANKA-1978 & Prison ordinance No.18 of 1844/ Community based Corrections Act No. 46 of 1999). Under the emergency situation and amidst the pandemic lock down these families and communities silently expressed their anger and agony. They generated fire and demanded to release all Tamil political prisoners and PTA detainees and voiced for justice. CBOs, civil society organizations and affected people strongly condemn the racist and tyrannical act of the state minister and demand justice.

We are in the position to point out more actions carried out by the same Minister Mr. Lohan
Ratwatte: on 09/09/21 he visited Welikada prison and acted in-humane way and also media witnesses Mr. Lohan Ratwatte was main person to perform public Minorities burned issue happened in 1995 during regime period of the Former president Chandrikka Bandaranayakka Kumarathunga and Late Mr. Anurud Rathwatha who was the defense Minister.

Prisons are not the correction places in Sri-Lanka. Especially, the Prisons are the torturous and massacre spots of Tamil minority prisoners. Welikada massacre (1983), Kaluthara killings (1997) and Bindunuvewa massacre (2000) are some of the cases that came to mainstream. All these killings were carried out by the inmates who were representatives of the majority community with the support of the prison officers.

In the recent incident, a government minister had entered the prison and degraded and threatened the Tamil political prisoners at gunpoint. Such occurrences again and again confirm that the Tamil political prisoners do not have safety and security in prisons, and they are kept in an environment that makes them always live in fear of their lives and physical safety.
State sponsored racists’ ideology which is deep rooted among particular sectors of the
Majority/Predominance society and tyrannies of the governments are basic reasons for continuing brutalities against minorities.

Contrarily minorities are treated negatively, and they are always kept under fear and in degraded psychic due to the discriminatory and oppressive treatments they experience in their day to day lives by the system of the state.

✓ International Convention on the Elimination of All Forms of Racial Discrimination-
Accession on 18 Feb 1982.

✓ Geneva Convention relative to the Treatment of Prisoners of War- Signed 8 Dec 1949
and 28 Feb 1959 (ratified/accessioned).
✓ Convention against Torture and Other Cruel, Inhuman or Degrading Treatment or
Punishment (CAT), 1984, ratified and accessioned on 03 January 1994.
✓ Optional Protocol to CAT, concerning regular visits by national and international
institutions to places of detention, 2002- Ratified by 05 December 2017.

The ICCPR specifically provides that “all persons deprived of their liberty should be treated
with humanity and with respect for the inherent dignity of the human person”.
And also Article 5 of UDHR says “No one shall be subjected to torture or to cruel, inhuman or degrading treatment or punishment.

As a Civil Society we have high respect and trust on international community and diplomats. We think that international bodies have accountability to involve in this incident and we feel you are the competent authority to obtain justice against this kind of actions happening in SriLanka.

Though the particular State Minister has resigned from his portfolio as State Minister of Prison Management and Prisoner’s Rehabilitation, still he would continue to remain as a State Minister of Gem and Jewelry Related Industries. Therefore, a full resignation is required, and a proper investigation must be held on his anarchist behaviour.