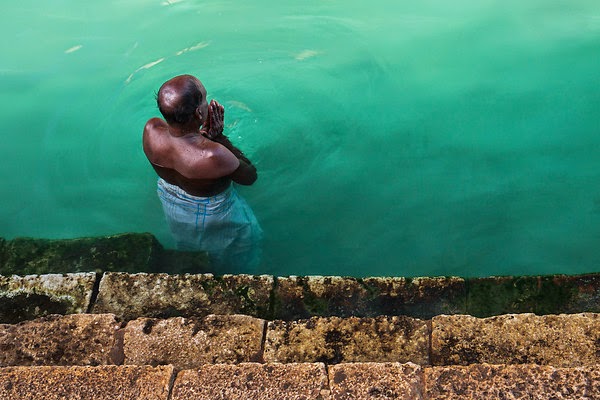 Ananthi goes for traditional medium of remembering the dead on Mu’l’livaaykkaal Day
Northern Provincial Council (NPC) member Ananthi Sasistharan has been protesting in front of a Sri Lankan military barrier on Mu’l’ivaaykkaal Remembrance Day demanding access to Keerimalai Nakuleasvaram temple at Keerimalai for the families to perform rituals to the dead family members. The SL military has been blocking all the avenues to the ritual site rejecting the Tamil families from conducting the ritual during Mu’l’livaaykaal remembrance. Keerimalai is situated in Valikaamam North which has been subjected to militarisation and Sinhalicisation by the occupying SL military.
Deputy Head of Valikaamam North civic council, S. Shageevan, who is also the president of Valikaamam North uprooted peoples organisation, said there was only SL military soldiers in Keerimalai. No civilian has been allowed to enter the ritual site, he said taking part in the protest launched by Ms Ananthi Sasitharan.
Ms Ananthi has been staging a protest Sunday morning in front of a new barrier put up by the occupying Sinhala soldiers.
The main road from Thellippazhai junction to Keerimalai has been blocked by the SL military. The Sinhala soldiers were telling the Tamils that only external tourists were allowed to proceed further to Keerimalai.
The SL military has been suppressing the university students, academics, political activists and the common public from conducting any remembrance to the thousands who perished in the genocidal war on Vanni.
On Sunday, SL soldiers were also deployed in front of political offices and key places in the peninsula. SL military was also deployed in front of Tamil National Peoples Front (TNPF) office in Jaffna.
Keerimalai is a pilgrim centre and is considered a sacred place to perform rituals to ancestors.
The Siva temple established at this place by a sage called Nakula Muni is named Nakuleasvaram, which according to the chronicles of Jaffna, is one of earliest temples that existed prior to the arrival of Vijaya of the Pali chronicles.
Recently, the occupying Sri Lanka Navy (SLN) has seized lands to expand a military cantonment at Keerimalai.