A female Judicial Medical Officer this week told a High Court inquiry into the killing of British national Khuram Shaikh, that during the attack in Tangalle, his Russian girl friend (Victoria) had suffered injuries which could have been fatal. The trial was taken up before Colombo High Court Judge Rohini Walgama this week. The incident took place on Christmas Day in 2011 at ‘The Nature’ Hotel in Tangalle where the British national was fatally shot and his fiancé beaten up and sexually assaulted by the suspects in the case.
The suspects are Obada Arachchige Lahiru Kelum, U. Saman Deshapriya, Sampath Vidanapathirana (former Chairman (UPFA) of the Tangalle Pradeshiya Sabha), Weerappulige Praneeth Chathuranga, Mohottige Sarath and Sarana arachchi Patabendige Chanuka Chathuranga. Senior State Counsel Thusith Mudalige was leading the evidence of the witness. 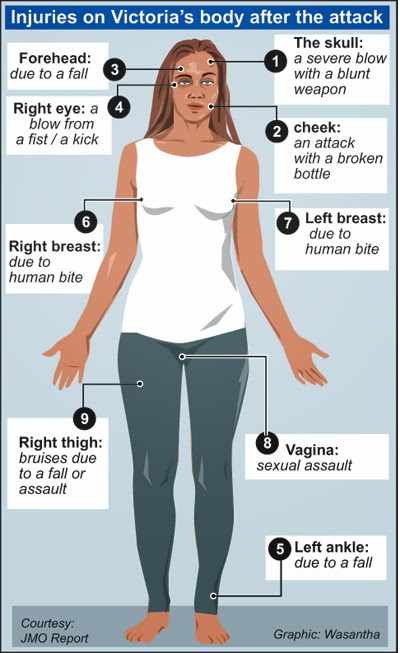 Karapitiya Hospital Assistant JMO Dr. L.S.Dhammi Gunahewa told court that the injury to the skull (injury 1) had been sustained as a result of a severe blow with a blunt weapon, while the injury on the cheek (injury 2) had been received due to an attack with a broken bottle. She said there were other injuries on the forehead which could have occurred due to a fall while there were more injuries near the right eye and near the left ankle.
Dr. Gunahewa noted that there were injuries on the right breast (injury six) caused due to it being bitten hard and an injury on the left breast (injury seven). She also had injuries below the vagina (injury eight) and on the right thigh (injury nine).
Dr. Gunahewa said during examination of the sexual organs Victoria was in pain due to injuries caused by a sexual assault or caused by other injuries.
She said on examination of the injuries it could be inferred that the injuries were caused by a sexual assault.
Senior State Counsel Thusith Mudalige appeared for the prosecution. The first accused Lahiru Kelum was represented by Jayantha Weerasinghe, P.C.
Attorneys Dilan Amarakoon, Ranjith Senanayake and Pradeep Jayakody appeared for W. Arachchige Lahiru Kelum alias Ravindra.
Attorneys Suresh Kariyawasam, Asith Siriwardana and Nalinda Indratissa appeared for Uduwanage Saman Deshapriya.
Kalinga Indatissa, PC., with Hemantha Gamage Chamika Hewapathirana and Niroshan Siriwardana appeared for Sampath Chandra Pushpa Widanapathirana.
Attorneys Suranga Munasinghe and Dhammika Hewapathirana appeared for Weerappulige Praneeth Chathuranga. Attorneys Vikum Panagoda and U.R. De Silva appeared for Mohottige Sarath alias Sahan while Counsel Rohana Deshapriya and Razeek Zarook, P.C., appeared for Sarana Arachchipatabedige Chanuka Chathuranga. The trial continues.
By Manopriya Gunasekara