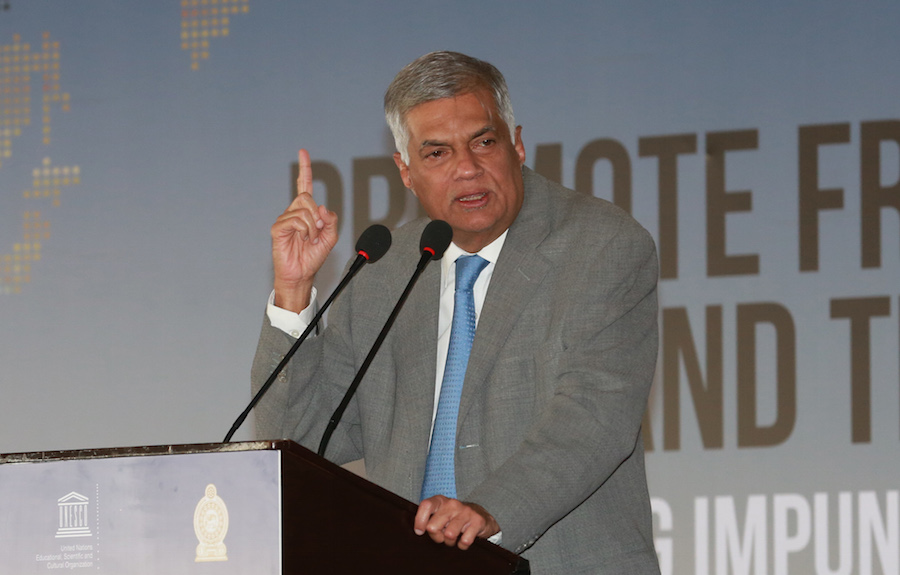 How times have changed! Three years ago in December the Common Candidate contesting the presidential election and political leaders of various hues who had gathered round him were making myriad promises which would turn our nation into a paradise flowing with milk and money. One such promise was to restore media freedom.

Those determined to effect regime change promised not only a free press but also to safeguard the rights of journalists unlike the government they were struggling to uproot and dump along with the garbage. A laudable undertaking indeed. The media in general seemed cowed by fear that harsh criticism of the government and expose’s of political crookedness and corruption could result in unimaginable horrors to editors and journalists and their immovable property.

I was in Sri Lanka in those exciting months before and after the election that brought Maithripala Sirisena to power. Every promise pledged from political pulpits including that of press freedom, had been greeted with enthusiastic applause by a public with great expectations. Now the time had come to see them fulfilled.

Criticise us if we do wrong

Criticise us if we do wrong, criticise us if we fail to keep our promises to the people, said the leading lights of the campaign who promised the citizens a new dawn. After years of gestation was the Miracle of Asia about to be born?

A public eager for change lapped it all up. But those who have heard such sonorous sayings time and again especially at election time were not entirely convinced. In conversations with senior journalists, commentators and the politically savvy one could detect a smell of cynicism. It seemed to say one thing-we have been through this before. Not once, not twice.

With the parliamentary election won a few months later and political power consolidated the sweet smell of success was unmistakable. But soon the euphoria of success began to fade as Sri Lanka’s new unity government stumbled along and the media started to articulate the growing disillusionment of the people who had expected an end to nepotism and cronyism. They saw the sheaf of promises turn into a distant dream. Those who promised a corruption free society, a transparent and accountable government enveloped themselves in opaqueness.

Offered media freedom the newly galvanised press and a largely infantile social media more dedicated to gossip and fiction than fact gradually turned on the new yahapalanaya government which had publicly said to criticise it if it failed to keep its faith with the people.

At a recent UNESCO- sponsored conference in Colombo Prime Minister Ranil Wickremesinghe used his keynote address to point more than one finger at sections of the media which he said did not seem to value media freedom that the Unity Government had restored.

Before long that umbilical link between government and media, particularly the plethora of websites and news platforms with often untrained practitioners that had emerged, began to fray. At various times government politicians began to growl and threats of new media laws were heard probably to keep the widely expanding media scene on the straight and narrow.

While government leaders and their acolytes fired salvoes at the media for abusing press freedom, the most vocal of the leaders was Prime Minister Ranil Wickremesinghe. In a previous avatar as premier he had taken positive steps to strengthen media freedom and protect journalists from such abhorrent institutions as the state-run Press Council. Defamation as a criminal offence was lifted. He worked hard to introduce a freedom of information law. That was then though the Right to Information Act was passed this time round.

At a recent UNESCO- sponsored conference in Colombo Prime Minister Wickremesinghe used his keynote address to point more than one finger at sections of the media which, he said, did not seem to value media freedom that the Unity Government had restored. But where are they today when press freedom was being discussed along with the physical abuse of journalists that had gone before?

They were nowhere to be seen except for a couple of heads of state-institutions and the editor of a privately owned media organisation, he pointed out looking at the audience. Speaking at this conference on “Regional Cooperation to Promote Freedom of Expression and the Rule of Law in Asia through Ending Impunity for Crimes Against Journalists” in Colombo, Prime Minister Wickremesinghe took the opportunity to castigate some media owners and journalists for their unconcern over media freedom.

Referring to a spate of killings and brutal assaults of journalists during the Rajapaksa era he said that the absence at this event of owners of media organisations as well as editors, except those he had mentioned, showed only too well their lack of interest.

There could of course be many reasons why heads of media organisation kept away. With titles like that for a conference which seemed to meander like the Mahaweli who would want to be there. Whoever the bureaucrats who produced that title should be given some elementary lessons in how to be succinct!

Not to make too finer a point of Wickremesinghe’s reference to the presence of two heads of state-run media organisations present, one might ask what happened to the other heads that were missing? The state-run media institutions are Lake House, Rupavahini, SLBC, ITN and Lankapuwath. There may be other divisions and sub divisions too seeing how institutions separate and multiply like amoeba.

Does Prime Minister Wickremesinghe include the absent heads of state-institutions in the category of those with little or no interest in media freedom or the safety of journalists?

Apart from the long-winded subject that might have kept journalists away from the opening session only to appear at the panel discussions which are more fruitful, another reason for their absence may well be to avoid the haranguing that the media is often subjected to by the prime minister be it in parliament or outside.

It might be recalled that weeks earlier some journalists were embarrassed by Wickremesinghe at a press conference because their news organisations had supposedly concocted a story about the Maha Nayake Thera of Malwatte rejecting some proposed constitutional changes.

Admittedly, everybody – prime minister or pauper – has the right to challenge false news and denounce the media for deliberately misleading the people if they had done so.

It is for this reason and to maintain the professional integrity of the established media and check the damage being done to professional media outlets that some years back the Editors’ Guild provided readers with a “right of reply” so that errors-deliberate or otherwise – might be corrected and apologies, where necessary, offered.

I dare say that Ranil Wickremesinghe has a case when he accuses some media of false or distorted reporting. But he is wrong when he implies that press freedom does not extend to attacking the government in office or supporting an opposition that sections of the media wish to return to power.

It is the attempt of some media to support the Rajapaksa clan and bring them to power that appears to get the prime minister’s goat. Freedom of the media is not divisible to pieces that suit one and to reject others that do not.

If one opens the doors to press freedom and exalts that virtuous deed one needs to accept the good, the bad and the ugly. That comes with the territory. If a government makes press freedom its policy, then it also accepts the right of the media to support whoever it likes and criticise whoever fails to fulfill the promises made especially at election time.

It was the legendary C.P. Scott, more than 50 years the editor of the internationally respected Manchester Guardian who on the golden jubilee of the newspaper wrote “Comment is free, facts are sacred.” That is true and it should be so.

The media in the western world which the UNP admires so much takes political sides. Some might remain neutral but others are politically committed. It might be recalled that at the British elections in 2010, Rupert Murdoch’s widely circulated and influential tabloid the “Sun” switched sides at the eleventh hour. When the Conservatives won, it took the credit for the victory.

Today newspapers such as the Washington Post are highly critical of President Trump and his administration. So are several regional newspapers and reputed TV networks. It would be ridiculous to claim that one restored media freedom and then attack the media for using that freedom-unless that freedom is misused or abused as Murdoch’s News of the World and others had done by clearly transgressing the boundaries of that freedom.

Perhaps Ranil Wickremesinghe was too young to remember that in 1964 when the Sirima Bandaranaike under pressure from her coalition partner the LSSP, proposed a Press Bill to control the media, it was his father Esmond, who led the campaign against it. At the time he was managing director of the Lake House newspapers and Lake House was the command centre of the campaign to defeat the bill.

The bill was defeated in parliament by one vote and Mrs. Bandaranaike resigned. If I remember correctly Mangala Samaraweera’s father Mahanama Samaraweera who was an SLFP MP defected with C.P.de Silva and others and voted against the Press Bill.

Esmond Wickremesinghe used the power of Lake House and its media to bring down the Bandaranaike coalition. Subsequently Esmond was presented with the Golden Pen of Freedom award by the International Press Institute for his sustained campaign to defeat government efforts to subjugate the press.

I still remember Sir John Kotelawala telling me in Esmond’s presence how the master-strategist used the Ceylon Observer at the very last moment to deprive Sir John of the premiership and make Dudley Senanayake prime minister after D.S. Senanayake’s premature death.

We know that the media has been used for political ends, but not always in the way that some political leaders expect it to behave.