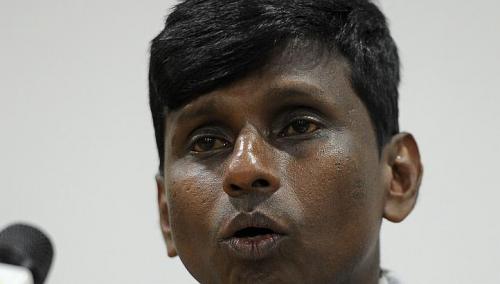 A media rights group Monday expressed fears for the safety of journalists in Sri Lanka after Colombo grilled two Australian activists and seized computer data before kicking them out.
The Free Media Movement (FMM) said it expected a crackdown by the authorities following last week’s questioning of the two International Federation of Journalists (IFJ) staffers in Colombo.

“We have very serious doubts about our own safety and that of independent journalists after the detention of IFJ officials last week,” FMM leader Sunil Jayasekera told reporters in Colombo.

He said the two activists — Jacqui Park and Jean Worthington — were questioned by the police Criminal Investigations Department and immigration authorities about their local contacts.

Their computer files had been hacked and storage discs destroyed, Jayasekera said.

The two Australians were detained last Wednesday while they were at a workshop on media freedom in Colombo, accused of violating their visa conditions and expelled from the country, according to immigration officials.

However, the FMM said the pair were told by the immigration department Friday that “it was all a big misunderstanding” and they were free to leave.

“This is simply part of intimidation to scare journalists and rights activists both here and abroad,” Jayasekera said.

“After insisting that they broke visa conditions and engaged in anti-government activities, they have not pressed charges. That is because there are no grounds for any action against them, but the government wanted to send a strong signal to independent journalists and activists.”

Shortly after arriving in Sydney, Park told reporters that she feared for the safety of journalists in Sri Lanka.

“From the kinds of questions that we had over the two days it was clear it was kind of a witch hunt against the local media, local journalists and media freedom activists who are really trying to create some free space for freedom of expression in Sri Lanka,” she said.

There has been no comment from immigration authorities who questioned the pair for two straight days while detaining them in their hotel.

The Brussels-based IFJ said it was also “deeply concerned” about the safety of media personnel in Sri Lanka after a Commonwealth meeting in Sri Lanka from November 15 – 17.

Sri Lanka has blacklisted many foreign journalists over their reports on the country’s human rights record and alleged war crimes in the final stages of the Tamil ethnic war in 2009.

Local journalists have also been the victims of crimes and many say they practise self-censorship.

An anti-establishment editor fled the country in August, less than a month after armed men held her at knifepoint.

In 2009, the Sunday Leader newspaper’s editor Lasantha Wickrematunge, a staunch critic of the government, was shot dead near his office just outside the capital.