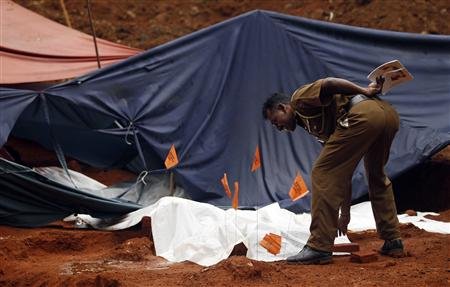 MATALE, Sri Lanka (Reuters) – A mass grave unearthed in Sri Lanka has stirred memories of the country’s bloody insurgencies and sparked calls for an official inquiry in the island nation that has drawn global scrutiny for its chequered human rights record.
At a building site near a hospital in Matale, a central town 142 km (88 miles) from the capital, Colombo, excavators have found the skeletons, or parts of the skeletons, of at least 59 people.
It is possible they died of natural causes many years ago but in a country rocked by two different insurgencies beginning in the early 1970s, the assumption many people are jumping to is that they are some of the forgotten victims of the violence in which more than 150,000 people were killed.
Ajith Jayasena, the judicial medical officer at the hospital adjacent to the site, is keeping an open mind.

“We can’t exactly say when they have been buried. These could be missing people,” Jayasena said, using a euphemism for victims of political violence.

“It is better if we can investigate this thoroughly. That is the most important question,” he said, referring to when they were buried.
Politicians and officials have called for an investigation by a government under pressure from the United Nations to address human rights problems and the deaths of thousands of civilians during the final months of a three-decade war with ethnic Tamil rebels in 2009.
The government has been widely condemned by human rights organizations for failing to properly investigate alleged war crimes. It rejects all accusations of rights violations.
But there are also questions about much earlier troubles.
Marxist rebels of the Janatha Vimukthi Peremuna (JVP), or People’s Liberation Front, launched an insurrection in 1971. The rag-tag rebels seized some parts of the island before being crushed.
In the late 1980s, the group launched a second phase of its insurrection. The security forces responded ruthlessly and many rebels or suspected rebels were killed or disappeared.
The war against Tamil separatists begin in 1983 and was mostly fought in Tamil areas in the north and east. The insurgencies were suppressed by the government with both heavy loss of life and numerous accusations of rights abuses.
The United Nations said in March in a report on disappearances, that, in all, more than 5,600 people were unaccounted for in Sri Lanka.
“BURIED IN TIME”
Sectioned off with yellow crime-scene tape, the 125 square-meter (1,350 square foot) site for a bio-gas plant where the bones were found is under 24-hour police guard. The judicial medical officer and police are overseeing the excavation.
Residents of Matale, a hilly farming area, have their suspicions about who lies under their rust-colored soil.
“We believe this is from the 1989-era insurgency,” said one of the residents who gathered near the site to have a look. He was referring to the second phase of the JVP insurrection.
“There was an army unit one kilometer away towards the town,” said the resident, who declined to be identified because of the sensitivity of the matter.
But other residents said the bodies could have been people killed in a landslide in the 1940s or a smallpox epidemic around the same time.
Police spokesman Priyashantha Jayakody said it was too early to say.
Unearthed skeletons not yet examined lay covered with white plastic sheets. Some bodies were buried individually while others were jumbled together, a hospital worker who has been at the site since the dig started on November 27 said.
Human rights group Amnesty International called for a thorough investigation.
“Other mass graves in Sri Lanka have uncovered the remains of victims of alleged enforced disappearances and exhumations have not always been carried out with the necessary care,” said Polly Truscott, the group’s deputy Asia-Pacific director.
The JVP, which transformed itself from a rebel group into a political party, also called for an inquiry.
“This incident should not be allowed to be buried in time and forgotten,” the JVP said in a statement.
(Additional reporting by Ranga Sirilal in COLOMBO; Writing by Henry Foy; Editing by Robert Birsel
Reuters
Share
Facebook
Twitter
WhatsApp
Pinterest
Email