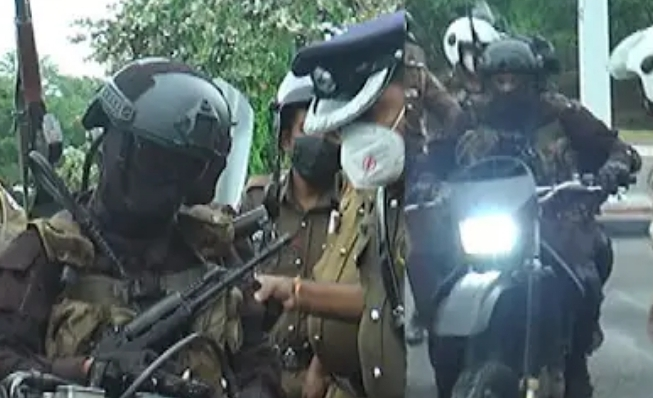 It has come to light that Sri Lanka government has deployed special military unit in Colombo to frighten #GoHomeGota protesters.

Yesterday (05 April) a group of fully armed masked men dressed in military uniforms on motorcycles stormed an area where a public protest was going on and behaved provocatively reports Lanka Truth. Incident happened at a public protest near Parliament where hundreds of protestor had gathered.

The protesters stopped the motorcyclists protesting against their actions, and the police offices tool control of the situation by checking the identity of the armed men.

The whole incident was caught on camera by many, uploaded to social media and soon went on viral.

Soon the Secretary to the Ministry of Defense yesterday issued an order directing the IGP to inquire into the matter. A police spokesman has officially confirmed that the IGP is also conducting investigations against the officers who handled an explosive situation according to the law.

A group of lawyers have protested the action of the Secretary to the Ministry of Defense Kamal Gunaratne, who had called for disciplinary action against police officers who stopped gunmen on numberless motorbikes. during a public protest near Parliament yesterday (5th).

The Bar Association of Sri Lanka is also closely monitoring the situation and is reportedly working to ensure that police officers who acted to ensure public safety and rights are not victimized, it is reported.

(With the inputs form Lanka Truth)