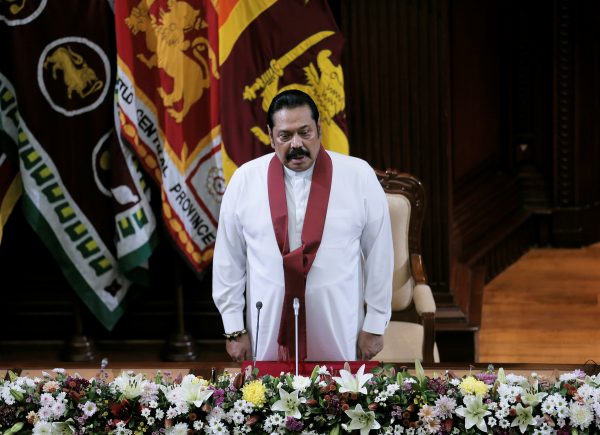 It was an eventful year in Sri Lankan politics in 2019. If not a year of crisis, perhaps the term chaos sums it up most accurately.

The year started with several political tugs-of-war between former president Maithripala Sirisena and former prime minister Ranil Wickramasinghe, after Sirisena sacked Wickramasinghe and swore-in Mahinda Rajapaksa , quite unconstitutionally. These dramatic events paved the way for more political problems later in the year and eventually led to the end of the so-called Yahapalanya (good governance) coalition government.

Jihadist-inspired bombings in April 2019 created a security crisis on top of the deepening political crisis. Failing to prevent these Easter attacks and mishandling the aftermath proved to be the last nail in Yahapalanaya’s coffin. The electorate’s response to these events was clear at the presidential election held in November 2019, which brought the Rajapaksas back to power. The Rajapaksas secured 52.25 per cent of the vote, almost all from the Sinhala Buddhist constituency that played a key role in sending the Rajapaksas packing just over five years ago amid serious allegations of corruption and nepotism.

The 2019 political crisis was a long time in the making. The controversial handover of Hambantota Port to China in 2017 on a 99-year lease, after the new government failed to repay loans taken out under the previous regime, became an issue. Controversies surrounding the port’s handover went beyond economic concerns, sparking endless spats between Sirisena and Wickramasinghe, the former leaning towards China and the latter towards the United States. They accused one another of undermining Sri Lanka’s sovereignty and of angering India, China and the United States.

The most dramatic scandal was the Central Bank bond scam, which placed Wickramasinghe in the political spotlight. Set up at the direction of Sirisena, the Bond Commission inquiry made political history. This was the first time in Sri Lanka’s history that a sitting prime minister had been summoned before a presidential commission of inquiry.

The SLRs 10 billion (US$55 million) bond scandal certainly eroded the public’s trust in the government. Although the prime minister protested his innocence, predatory forces close to the United National Party — Wickramasinghe’s party — were shown by the inquiry to have held key stakes in the scam. This scandal helped turned the tables in favour of the Rajapaksa clan, who wasted no time exploiting the fiasco to their own advantage. The scandal helped them win the 2018 local government elections, and eventually, the presidential elections of November 2019.

The renewal of the Acquisition and Cross-Servicing Agreement (ACSA) and the Status of Forces Agreement (SOFA) with the United States also created waves. The ACSA was signed in 2007 under the Rajapaksa regime and was renewed in August 2017. But in 2019, the terms of the renewal caused political heat in Colombo and drew serious criticism from the public over the government’s apparent abandonment of Sri Lankan sovereignty.

The new terms of the agreement also raised suspicions from both China and India. Divisions between the seemingly pro-United States Wickramasinghe and the pro-China Sirisena were on stark display. The timing of the renewal proved bad luck for Wickramasinghe. Unsurprisingly, the populist candidate Gotabaya Rajapaksa strategically remained silent on the issue during his presidential election campaign.

To explain this past year’s political crisis, one cannot ignore the ‘narcissism of small differences’ that characterised the relationship between Sirisena and Wickramasinghe. Although both Sirisena and Wickramsinghe are veterans of Sri Lanka’s political scene, their political behaviour during the Yahapaalanaya government showed political immaturity, childishness and arrogance. Their clashing egos also curtailed their ability to jointly deliver on key election promises.

President Rajapaksa has clearly indicated that national security will be his number one priority. Almost all of his new policies rest on this single imperative, as well as on a promise to deliver ‘order’ and ‘prosperity’. His approach is forward-looking and pragmatic — convenient given the ghosts of his past, including alleged war crimes, which have not yet fully faded away.

On the economic front, Rajapaksa is recasting the old dream of being the ‘new Singapore’. This requires both stability and security as preconditions. The first casualties of his pragmatic approach will probably be freedom of speech, civil liberties and parts of the constitution that protect them, especially the 19th Amendment. Abolishing the amendment will pave the way for Rajapaksa to reinstate the executive presidential powers that were done away with in 2015.

Internationally, Sri Lanka will continue its drift eastwards away from the West. An unfolding diplomatic spat between Switzerland and Sri Lanka, which began within days of Rajapaksa’s election, serves an early warning of Colombo’s foreign policy of intolerance towards the West. Meanwhile, a friendlier approach towards neighbouring India is already on display, as well as a strategic balancing act with China. But over time, management of this relationship will require more political wit and skill from the ruling regime. Both India and China appear to be the most helpful partners able to deliver on promises of economic prosperity, political stability and security.

Given all of this, Sri Lanka appears to be inching towards a more authoritarian security politics — governance controlled by experts on violence, leaving very little room for democratic dissident voices and in addressing the enduring grievances of minority communities in the country.