SRI LANKA: “Lot of talking and not much improvement” in the north 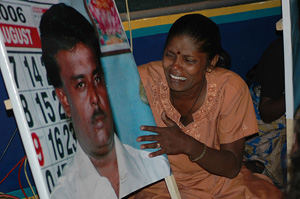 Sri Lankan parliamentarians in favour of acting on the recommendations in a report into the final stages of the country’s civil war by the Lessons Learnt and Reconciliation Commission (LLRC) are slowly gaining ground over those who are not, says a presidential peace process adviser.

The government’s initial reaction to the LLRC recommendations was positive, presidential adviser and parliamentarian Rajiva Wijesinha told IRIN, but others saw the report, released just over six months ago, as a call for regime change and were “highly critical”.

“However I now think we have equilibrium again, and the more positive forces in government seem likely to go ahead [with implementing the recommendations],” Wijesinha said, noting that many of the LLRC recommendations fell within the existing framework of the Ministry of Disaster Management and Human Rights.

“We have wasted far too much time in defending ourselves against gratuitous attacks, when a simple general appreciation of the LLRC would have taken us forward more quickly. But we have to realize that other countries play games in terms of their own interests, and we have to be sensible enough to ignore these and move forward in the interests of pluralism and peace,” he said.
Sri Lanka’s president Mahinda Rajapaksa formed the commission in May 2010 to investigate the final period of a decades-long civil war between the government and separatist rebels from the Tamil ethnic group. After an 18-month inquiry, the commission submitted its findings to parliament on 16 December 2011.

Human rights groups questioned the group’s impartiality and along with the UN Secretary-General’s Panel of Experts on Accountability called for an independent inquiry, which the government rejected.

Among dozens of recommendations, the LLRC called for a special commissioner to investigate alleged disappearances and criminal proceedings; an amendment to the Registration of Deaths Act, which allows a next of kin to apply for a death certificate if a person is missing due to “subversive” activity; an independent advisory committee to examine the detention and arrest of persons in custody to address concerns about indefinite detention without due process under an anti-terrorist law; and addressing grievances from minority communities, including Muslims in the north and Tamils.

Since then there has been some progress in economic development and resettlement in the northern conflict zone, but many problems still exist, said Paikiasothy Saravanamuttu, executive director of the Centre for Policy Alternatives, a Sri Lankan think-tank.

“Progress also made with the rehabilitation of LTTE [Liberation Tigers of Tamil Eelam, the separatist movement] cadres, although there are reports that even after being released they are being questioned and face issues with regard to re-integration in the community,” said Saravanamuttu.

Not enough has been done to reach a political settlement between the sometimes antagonistic ethnic groups of Tamils and Sinhalese, demilitarizing the north, punishing impunity, and improving governance – such as putting in place legislation that ensures the right to information – and establishing independent commissions to investigate the conflict, Saravanamuttu noted.

The LLRC called for independent investigations into the UK’s Channel 4 television broadcasts in 2011 and 2012, which examined alleged war crimes, and also into civilian massacres spanning a decade in the north’s Trincomalee District, including the 2006 murder of 17 workers of the French NGO, Action Against Hunger. Saravanamuttu said these investigations should start immediately.

Thavarajah Rasiah, 63, in Jaffna District in the northern Sri Lanka, told IRIN that residents in the former war zone have been promised much, but seen little. “Lot of talking and not much improvements”.

Selva Sivaguru, 43, in neighbouring Mannar District, said Tamil people were exhausted by conflict and would like to find normalcy rather than more politics. “These political games have pushed the country through 30 years of conflict. I hope this will not be repeated.”

The government does not seem keen on implementing governance recommendations that would interfere with the highly “personalized” powers of current leaders, he added.

“The government is also inclined to justify its resistance to implementing the LLRC recommendations on the grounds that the international community is interfering in Sri Lanka’s internal affairs,” Perera said.

The LLRC recommendations included a mourning period prior to the country’s independence day celebrations on 4 February to express solidarity and sympathy with conflict victims, but nothing took place, said Ruki Fernando of the Christian Alliance for Social Action, a local NGO. Rather, pro-Sinhalese victory parades rolled out.

Fernando said there were a number of critical issues needing urgent attention, including the continued existence of a large number of “high security zones” still controlled by Sri Lankan military forces in the north, which prevent large numbers of people returning to their places of origin.

Other matters needing urgent attention were alleged attacks on the media, reports of religious harassment, issues of language discrimination, and cases of abuse of personal freedoms, including the abuse of civil liberties and human rights.