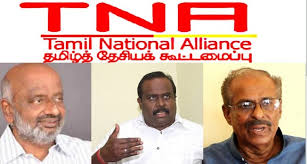 An Election for a President to be democratically elected for Sri Lanka is due to be held on 16th November 2019.

The Tamil National Alliance (TNA) -The Illankai Tamil Arasu Kadchi (ITAK) as the party with the third largest number of seats in Parliament desires to state its position, in regard to the said election.

The contest as of now appears to be primarily between the first two candidates referred to above.

The people expect the newly elected President to be genuinely committed to (1) Democracy, opposed to Authoritarianism and Totalitarianism, that could lead to dictatorial tendencies, (2) the protection and preservation of the independence of the different institutions of governance, the Legislature, the Executive and the Judiciary, the Services, in particular, the Public Service, the Police Service, and the Armed services and the different institutions in control of the said services, (3) Fundamental Rights and Human Rights and (4) Justice and Equality and committed to enabling all citizens irrespective of ethnicity or religion, to genuinely partake in Governance, both nationally and regionally leading to the creation of a united undivided and indivisible country in which all citizens, white preserving and protecting their specific identity, feel they are equals and that they belong to one country, just as much as the country belongs to all of them.

The above are lofty aspirations and it would be the duty of the voter to make a well informed judgement as to who best could be entrusted with this great responsibility. An error in judgement could lead to disastrous consequences.

The first two candidates have been involved in governance and belong to political formations that have been in governance in recent times. We have their past performance, on the basis of which a proper judgement can be made.

We also have their manifestos which define their policies, on the basis of which also, a judgement can be made in regard to their commitment to democracy, inclusive of abjuring authoritarianism and totalitarianism protecting the independence of the legislature and the judiciary, the services and institutions, promoting justice and equality amongst all citizens inclusive of the sharing of the powers of governance within a united undivided and indivisible country and thereby uniting the country .

The record of the Podujana Peramuna and its candidate Mr. Gotabaya Rajapaksa and others in governance with them has been dismal. The repeal of the 17th Amendment to the Constitution, the enactment of the 18th Amendment, the manipulation of the legislature, for the said purpose, the abolition of the Constitutional Council, all higher appointments to the services, and the higher judiciary being made solely in accordance with the will of the Executive President virtually brought all aspects of governance under the arbitrary and capricious control of one individual – the Executive President. The Impeachment of the Chief Justice and the prosecution of the former Army Commander on frivolous charges confirmed the totalitarian and authoritarian nature of the regime. The Constitution was amended to enable the functioning President to continue in office for any number of terms demonstrating the determination to continue with dictatorial rule.

The high-jacking of the functioning Government in October 2018, through the formation of an unconstitutional government without a majority in Parliament; the attempts to muster a majority in Parliament through defection induced by offers of office, bribery and other considerations, were again indicative of the absolute lust for power. The country was saved from calamity on account of the independence of our higher judiciary. The Tamil National Alliance (TNA) – the Illankai Tamil Arasu Kadchi (ITAK) stood firmly for Democracy in Parliament without succumbing to any pressure.

Despite the fullest co-operation extended by the Tamil National Alliance (TNA) the Rajapaksa Government abandoned talks in regard to a political solution to the national question, thereby failing to promote unity amongst all the people so as to enable them to live in a united, undivided and indivisible country, avoiding conflict and disunity. The government further attempted to dilute and diminish existing constitutional arrangements for the sharing of powers of Governance.

The Government also failed to keep its commitments domestically and to several sources in the International community to take further steps to constitutionally enhance and make more meaningful the sharing of the powers of governance.

The performance of the other main candidate Mr. Sajith Premadasa and the political formation to which he belongs does not leave room for such complaint. They have on the contrary made their contribution to taking the process forward.

Mr. Sajith Premadasa is a leader with clean hands. In whatever capacity he has functioned, it is accepted that he has done his best. He has reiterated his firm commitment to uniting all the people and the country and taking forward the country towards progress and prosperity. He states that he has a clear vision of his mission. There are positive features deserving of favorable consideration.

The issue of an acceptable political solution to the national question within a united undivided, indivisible country, the issue of missing persons, the issue of persons in custody, the release of lands, resettlement and rehabilitation, the implementation of commitments made by the Sri Lankan Government both domestically and internationally, need to be fulfilled, and the newly elected President would need to address these matters urgently.

An examination of the Manifestos of the two candidates viewed along with their previous performance would suggest that reposing confidence in the candidature and programmes and polices of Mr. Sajith Premadasa of the New Democratic Alliance would be the correct course of action.

In regard to economic issues both candidates have made very extensive promises; to what extent they will be fulfilled remains to be seen. Corruption is a charge levelled against the Governments of both candidates. If Sri Lanka is to survive, corruption should be brought to an end.

Taking all factors into account, particularly past performance on vital fronts and future performance based upon their respective Manifestos the Tamil National Alliance (TNA) – The Illankai Tamil Arasu Kadchi (ITAK) would urge all people, particularly the Tamil People whom it represents to vote for Mr. Sajith Premadasa, the New Democratic Alliance candidate contesting under the Swan symbol.