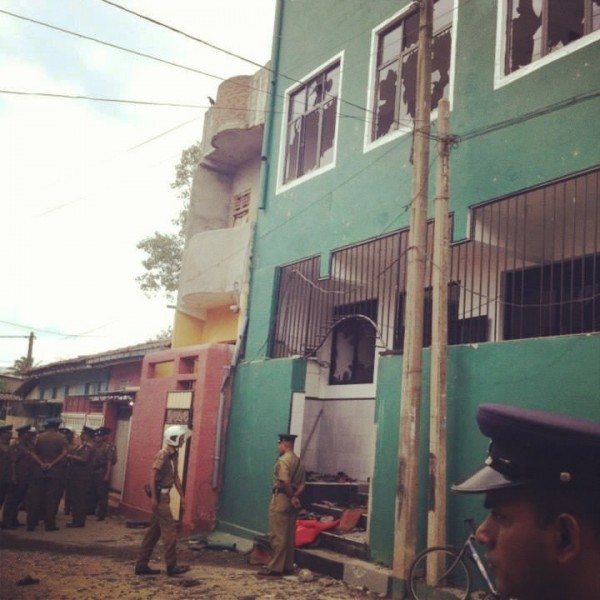 Sri Lankan police lifted a curfew on a Colombo neighbourhood Sunday after a Buddhist-led mob attack on a mosque raised religious tensions and left the Muslim minority fearing further violence.

“The curfew was lifted this morning, but we have a strong presence in the area,” a police spokesman said.

There was no immediate reaction from the government to the violence, which followed Buddhist objections to the opening of the new mosque, but Islamic clerics expressed concern.

“We were surprised because we thought things were settling down,” Fazin Farook, spokesman for the All Ceylon Jamiyyathul Ulama, Sri Lanka’s apex body of Islamic clerics, told AFP.

“With this attack, we are worried again and we see this (anti-Muslim) trend continuing. We condemn this attack.”

Farook noted that the latest violence came five months after an anti-Muslim campaign culminated in the torching of two Muslim-owned businesses just outside the capital.

Three Buddhist monks and 14 others who were arrested in connection with the arson attacks in March were later freed as police and the victims did not press charges.

“We thought things were settling down since then. The government had also done a lot to calm the situation, but this incident came up suddenly and that has worried the community,” Farook said.

The council said the attack occurred despite assurances from state authorities that the new mosque in the area could stay despite protests from a nearby Buddhist temple.

“There were police deployed to guard the mosque, but unfortunately the constables were unable to maintain law and order,” said council president N. M. Ameen.

“The community is very worried and concerned about safety.”

A security official told AFP Buddhists had objected to the new mosque which was constructed to replace an older place of worship that was earmarked for demolition.

“The Buddhist temple had objected to the relocation of the mosque and the troubles started during Saturday evening prayers of the mosque,” the official said, asking not to be be named.

All four people injured in the attack, including two police constables guarding the mosque, remained in hospital Sunday.

Residents said temple bells summoned dozens of men who stormed the mosque and started throwing stones and beating up worshippers.

Several homes in the area were also damaged, residents said.

Seventy percent of Sri Lanka’s 20 million population follow Buddhism while Muslims are the second largest religious minority with just under 10 percent after Hindus who make up about 13 percent. Others are Christian.

Sri Lankan police stand guard outside a vandalised mosque in Colombo on August 11, 2013. Police lifted a curfew on a Colombo neighbourhood Sunday after a Buddhist-led mob attack on a mosque raised religious tensions and left the Muslim minority fearing further violence.
AFP