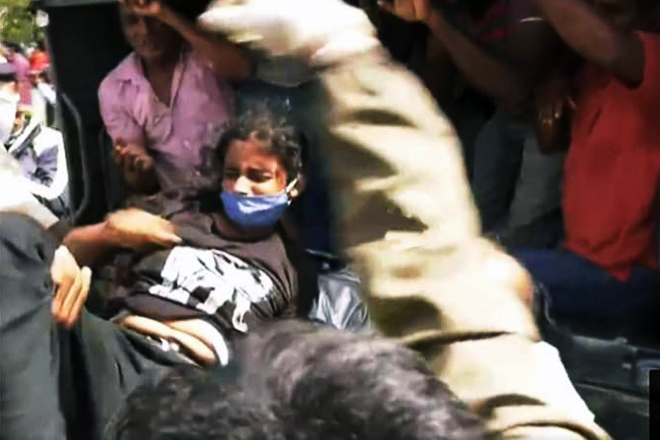 Image: Ishini Divyanjalee One of the protesters,   manhandled by Police has to be hospitalised. ( Image: LankaViews)

The killing of George Floyd, who was brutally murdered by the Minneapolis Police in the United States, has launched worldwide protests against the racism, brutality and repression of the police. We strongly condemn the violence by the police towards peaceful protestors yesterday (09), and the arrest of those involved in yesterday’s campaign to express solidarity to this international struggle. The 53 persons were arrested allegedly for violating a Fort Magistrate Order preventing a demonstration. It was also alleged that they were violating COVID-19 measures although the persons in the protest were in fact seen abiding by mask wearing and social distancing requirements. Those arrested included several lawyers, including a member of Liberation Movement, Swasthika Arulingam, who approached the Police to question the violent assaults, and the grounds on which the arrests were being made prior to even the commencement of the protest.

The police arrested the protesters near the Kollupitiya Market in a violent manner, for allegedly violating a Court Order, which had banned the protest from taking place “in the vicinity” of the US Embassy. We also condemn the police illegally arrested protesters at Lipton Circle (Town Hall), as the terms of the order did not extend to this location. We further denounce the derogatory attacks by the police, on several women, including an elderly woman, who were protesting.

One of the grounds of these arrests was that protestors were not following COVID-19 health guidelines. However, those arrested were herded into crowded Police vans and trucks, and therefore not in compliance with any quarantine regulations. It is not the citizens who violated the law, and who obstructed public safety – it was the police, those who pledge to uphold the law. It is an act of lawlessness on their part, against the people’s right to protest freely.

Another incident that marked this contradiction, and drew indifference from authorities, police included, was the manner in which late Minister Thondaman’s funeral was carried out. The funeral was carried out over the course of a week, with viewings being held at different locations across the country, in clear violation of quarantine guidelines, at a time when movement restrictions were far more. Is this not a blatant display of there being one law for the ruling elite and another for the general public?

The Government acts in this brutal manner, at a time when Parliament remains dissolved, and we are in a lead up to a Parliamentary Election. This is specifically why such attacks are particularly grave, as the intolerance of the people’s right to peacefully advocate for the rights of others, and the violence meted out to them by State forces, is a distinct mark of a dangerous and undemocratic political climate.

The Liberation Movement reiterates that the police is duty-bound to protect the democratic rights of the citizens of Sri Lanka, towards greater public security, instead of violating the rights of the people they are meant to serve and protect.