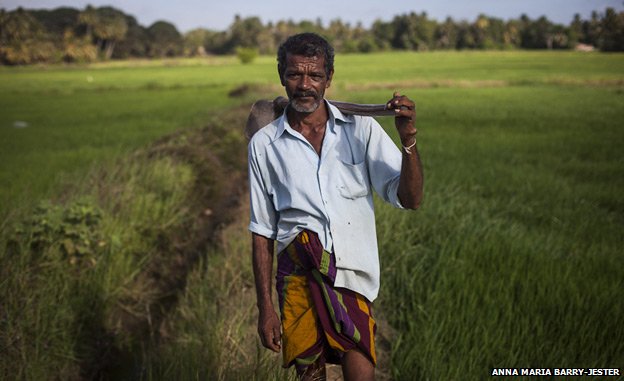 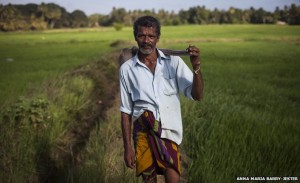 Thousands of people in the Asian island nation of Sri Lanka have been struck by a mysterious and deadly form of kidney disease. A new study points to a likely cause – pesticides and fertilisers.

Tucked away in Sri Lanka’s North Central Province is the village of Halmillawetiya. A pebbled path connects small houses of brick and mud set among coconut palms and other tropical trees.
Sampath Kumarasinghe, aged 21, lives here with his widowed mother and extended family.
I find him resting on a wooden bench in the front yard. His mother, P Dingirimenike, sits close by, talking and cutting areca nuts, which people chew like tobacco. The sounds of a radio waft from the house.

Kumarasinghe greets me with a “Hello”.

But you can tell he isn’t fine. Despite the brutal heat, he’s wearing a wool hat. He speaks softly, and his movements are slow for someone his age.

Like most people here, Kumarasinghe is a rice farmer, but recently he hasn’t had the strength to work on his farm. 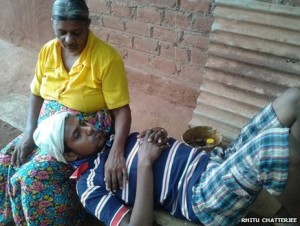 Kumarasinghe’s kidneys are failing. They are no longer filtering waste from his bloodstream.

He is being kept alive by dialysis, a procedure he receives twice a week at a regional hospital. He is hoping to get a kidney transplant.

Kumarasinghe is one of thousands of people in the North Central Province suffering from chronic kidney disease. According to the Sri Lankan Ministry of Health, 15% of the population here is affected. Most of them are rice farmers.

The disease first came to the attention of physicians at the public hospital in the provincial capital, Anuradhapura, about 20 years ago.

“They started noticing that there [were] a number of deaths due to kidney disease,” says kidney specialist Dr Rajeewa Dassanayake.

“And the physicians at the time noticed that this was not happening in the rest of the country.”

“Unfortunately, for CKDu, there’s still no specific treatment,” says Dassanayake.
And there has been no known way to prevent it.

Four years ago, the World Health Organization (WHO) and the government of Sri Lanka launched a joint investigation into its causes.

Scientists tested people and the environment. They took blood, urine, and tissue samples and tested the region’s food, water, and air.

The results, released this summer in a one-page press release, suggested that the culprits were two toxic metals – cadmium and arsenic – contaminating food and the air. 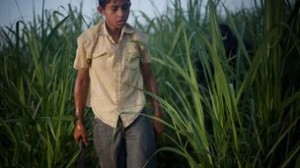 Relatively high levels of the metals showed up in the blood and urine of people in the North Central Province, says Palitha Mahipala, an official with the Sri Lankan Ministry of Health.

Although the levels were generally within what is considered the safe range, Mahipala says that continuous exposure to those levels may have been damaging.

“Probably the chronic exposure would have been the reason for this,” he says.
But if arsenic and cadmium are to blame, where are they coming from?

The new study blames farm chemicals, which are cheap in Sri Lanka, thanks to government subsidies, and often overused.

Cadmium is found in some fertilisers. Arsenic is an active ingredient in some pesticides.

Companies that import and sell pesticides and herbicides contest the government’s conclusion. They point out that the government and WHO have not yet released their full study.

“We believe the evidence is not scientific enough to say that the pesticide is the main reason for this chronic kidney disease,” says Senarath Kiriwaththuduwage, research and development manager at Crop Life Sri Lanka, an industry trade association.

“These findings are not published in reputed scientific journals.”

We are losing the very productive crowd – they are farmers, they feed us”End Quote Aniruddha Padaniya President of the Government Medical Officers’ Association
The WHO says it will publish the study in the coming months, but are still finalising details.

Some doctors and scientists familiar with the study agree that more research needs to be done, but many believe that farm chemicals are at least partly to blame for CKDu.

In its press release about the study, the government writes that preventing “indiscriminate use of fertilisers and certain pesticides… can help protect the kidney”.

Yet little has been done to spread that message to the people who should hear it.

Farmers I spoke to in the North Central Province say they know nothing about the study.

J A Jayarathne, in the village of Mihintale, showed me his stock of fertilisers, a few sacks piled in one corner of a shed behind his house. He says he has no plans to change the way he uses farm chemicals.

“I’ll use these fertilisers for my next crop,” he says.

No-one has told him that they could be a cause of the disease that he too, at the age of 46, is now suffering from.
Nor have consumers been told what foods are most likely to be contaminated. The government says it will release that information after it has conducted more detailed studies.

This failure to publicise the results of the WHO study frustrates doctors.
Dr Palitha Bandara, the top health official in the North Central Province, wants the government to improve tests on farm chemical imports. 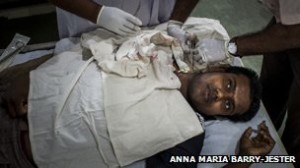 Many fertilisers, he says, come from China. “We don’t know what types of chemical ingredients – elements – are there in the fertilisers.”

As for pesticides, last year customs officials did test some imports and found four kinds that contained small amounts of arsenic – although arsenic-based pesticides are illegal in Sri Lanka.

Those pesticides were seized by the authorities, but later released. The head of the pesticide regulatory agency assured the public that the levels were too low to cause any harm.

Aniruddha Padaniya, president of the Government Medical Officers’ Association, blames “vested interests” for preventing strict policing of agrochemicals. Tackling the illness should be a national priority, he argues.

“We are losing the very productive crowd. They are farmers. They feed us,” he says.

There are many unanswered questions:

In the North Central province, I am surprised at how little anger and frustration I encounter.

The mother of the 21-year-old kidney disease patient, Sampath Kumarasinghe, chokes up as she recalls the time doctors first told her about her son’s illness. 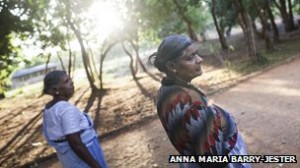 P Dingirimenike prays for her son at a Buddhist temple

She says, all she thinks of now, is of ways to save her son’s life. “That is what I think of day and night.”

And yet, when I ask about the role of the government, she says she’s grateful.

“The government has helped us,” she says.

Other countries that have been struck by a similarly mysterious form of chronic kidney disease – most notably, in Central America – offer dialysis to only a small fraction of patients who need it. Kidney dialysis is an expensive procedure.

In Sri Lanka, the government is trying to help larger numbers of patients. It is expanding access to dialysis and to kidney transplants. These efforts are keeping many patients alive.
But doctors and public health officials remain frustrated. They say more should be done to prevent people from getting sick in the first place.

This story was reported as part of a joint investigation by PRI’s The World and the Center for Public Integrity.