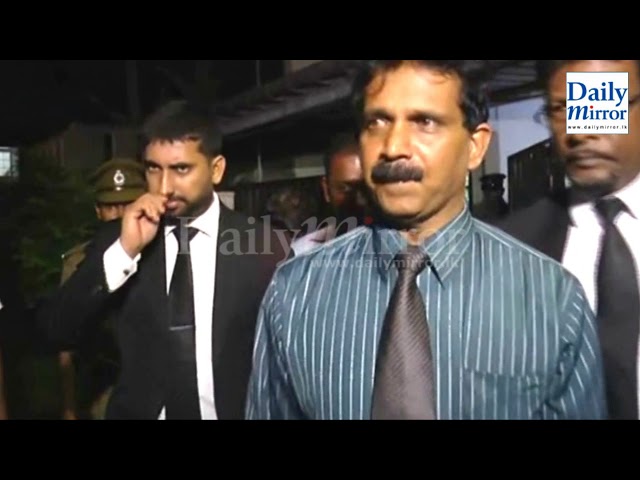 A Presidential Secretariat official at the centre of Thursday’s bribery scandal had allegedly blocked the transfer of machinery, scrap metal and other assets belonging to the Kantale sugar factory to a joint venture company that had signed a US$ 100 million deal to revive the facility.

I.H.K. Mahanama, the Chief of Staff of the President, in his previous role as Secretary to the Ministry of Lands had secured Cabinet approval to auction the assets, which M G Sugars Lanka (Pvt) Ltd was claiming under the agreement. The company then filed arbitration proceedings in a Singapore tribunal to stop the Government of Sri Lanka from selling the machinery and scrap.

In October last year, the Singapore International Arbitration Centre granted M G Sugars Lanka an interim award barring the Ministry of Lands from disposing of the machinery and other assets pending a final decision. The joint venture is made up of the Sri Lanka Government, Shri Prabulingeshwar Sugars and Chemicals Ltd of Bangalore and SLI Development Pvt Ltd of Singapore.

Investigations have now revealed that Dr Mahanama was allegedly angling for a bribe from the investors, authoritative sources said. The machinery was valued at Rs 540 million. This is the amount he is initially said to have solicited, before agreeing to settle for Rs 100 million. His accomplice P. Dissanayake, once a secretary to former President Chandrika Kumaratunga, was State Timber Corporation Chairman at the time of their arrest on Thursday. He was “more of a go-between,” sources familiar with the case said, with Dr Mahanama being the alleged mastermind.

The sources praised sleuths from the Commission to Investigate Allegations of Bribery and Corruption (CIABOC) saying that several meetings had taken place–some of them at a bakery opposite the National Eye Hospital in Colombo–between the investors and one or both the suspects before the first Rs 20 million instalment of the bribe was given.

These meetings were observed by CIABOC investigators. Only the last two discussions were attended by Dr Mahanama. The others were handled by Mr Dissanayake. The two suspects have been remanded till May 9.

The Kantale deal has been dragging on since August 2015 in a textbook case of the agonies faced by foreigners seeking to set up business in Sri Lanka. That month, M G Sugars Lanka signed the Board of Investment (BOI) and shareholder agreements for the revival and restructuring of the factory.

The 30-year deal was structured as a build, operate and transfer project with 51 percent of shares held by the Government. For their total investment of US$ 100 million, the foreign parties would get the remaining 49 percent. The operation was expected to generate around 1,200 jobs and meet a large percentage of the country’s sugar requirement. M G Sugars Lanka was to receive 500 acres for its nursery, housing and other facilities. This transaction, too, was also significantly delayed with the transfer taking place only last year.

Meanwhile, a total of 20,000 hectares was to be cultivated by farmers under a tripartite agreement with the company guaranteeing a market for their produce. But a dispute then arose over the machinery and scrap metal. The investors maintained that it is explicit under the relevant agreement that these must come to them. Dr Mahanama disputed that. The matter was referred to the Attorney General’s Department which initially gave an opinion in favour of M G Sugars but later reversed it.

This cleared the way for Dr Mahanama to call for tenders to sell the machinery for scrap iron–and the investors went for international arbitration, obtaining an interim order to prevent the auction. “In the meantime, the two suspects have been approaching the investors soliciting a bribe to clear the deal,” the sources said. “Ultimately, the investor had no choice but to fall in line and initiate discussions with Mahanama through Dissanayake.”

But parties from the investors’ side met Prime Minister Ranil Wickremesinghe in Kantale when he attended election meetings there earlier this year. They told him about their dilemma and were advised to send it in writing to his office. A letter was accordingly sent to the Prime Minister, the President’s Office and Lands Minister Gayantha Karunatilleka.

The PM’s office then encouraged the investor to lodge a complaint with CIABOC. This was done on the assurance that the informant would not face victimisation.

Once CIABOC had the complaint, its sleuths sprang into action. On Thursday, when the bribe was to be paid, Dr Mahanama, Mr Dissanayake and an investor first had tea in the lobby of the five-star Taj Samudra Hotel. The money had been brought in four bundles and the suspects had wanted three in one bag and one in another. When the investor said he brought only one bag, they had suggested asking for a bag from the hotel. They then went to the car park and the suspects got into the investor’s vehicle and started counting the money. It was at this moment that CIABOC officers arrested them.

Meanwhile, Mr Mahanama was immediately interdicted from his position as Chief of Staff by Secretary to the President Austin Fernando. Mr Dissanayake was also sacked from the State Timber Corporation. A statement attributed to the President said that “the incident confirms the importance of establishing independent commissions and implementing the policies of the Government against bribery and corruption”.

Leaving a comment on the social media site Facebook, Mr Fernando said it was time to support the proposed Judicature Bill and that recent actions for legal changes mooted by CIABOC “were totally, practically and even operationally backed by the Presidential Secretariat”

“We want total political support for the changes,” he said.