Sri Lanka: Journalists were labeled as LTTE agents because they are Tamils and since they work in the Tamil language 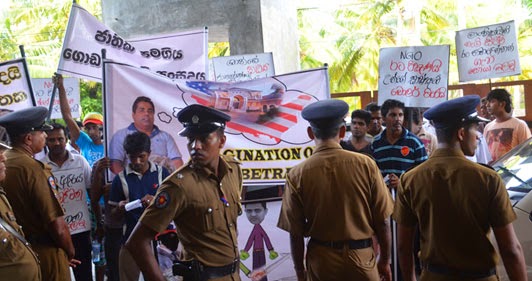 Arbitrary Disruption of TISL’s Investigative Journalism Workshop
(TI SL release)
The Transparency International of Sri Lanka (TISL) vehemently condemns the disruption of a workshop they had organized on investigative journalism for the second time and urges the government to take stern action against those who were responsible. TISL has been conducting training programmes for journalists on the subject of investigative reporting against bribery and corruption and good governance for many years.
With the intention of encouraging journalists to write investigative reports on the recommendations made by the Lessons Learnt and Reconciliation Committee (LLRC) to ensure good governance, a similar programme was introduced for the vernacular language journalists.
The entire process of the programme was publicized through the media in view of complete transparency and selection of the participants was done through application process.
The programme had already been conducted for Sinhala language journalists. The workshop for Tamil language journalists started in Deer Park Hotel, Giritale on 22nd May. Tamil and Muslim journalists from North and Eastern provinces and Colombo were in participation. However, during the conference the hotel management informed the TISL that the workshop could no longer be conducted based on instructions received from the Ministry of Defence. The TISL is in possession of written evidence from the hotel management to prove this.
Thereafter, TISL decided to hold the workshop at the Goldie Sands Hotel, Negombo, but this was disrupted by an organized group of persons who arrived at the premise. The protesters accused the TISL of supporting terrorists and claimed that the workshop was to train people to give evidence against Sri Lanka in an international investigation. We have evidence that these protesters were transported to Negombo from outside.
Despite continuous emphasis by our representatives that this workshop is legal and not something against the country, the police did not take any action to disperse the protestors, instead. Even TISL representatives continually highlighted the fact that the police did not take any steps to disperse the crowd. Instead of dispersing the crowd, the police ordered to stop the workshop. Superintendent of Police J.K.H. Liyanage who arrived at place said police protection can be provided only if we stop the workshop and leave Negombo.
The TISL express displeasure over the statement made by a high rank police official. The police acting in favour of the protestors imply that there is an invisible but powerful hand behind the incident.
The journalists who took part in the workshops were registered with and accredited by the Ministry of Mass Media and Information. Protestors claimed that these journalists are Liberation Tigers of Tamil Eelam (LTTE) agents. If these journalists are LTTE representatives as claimed, the Ministry of Mass Media and Information should then take responsibility for it.
These journalists were labeled as LTTE agents because they are Tamils and since they work in the Tamil language. Such acts are an obstacle to the reconciliation process and at a time when we speak of national unity, the violation of rights of the Tamil journalists cannot be approved. We firmly believe that Tamil journalists should also have the right to receive training like the Sinhala journalists did.
Due to the intimidation, we took steps to take the journalists to the Galadari Hotel, Colombo and there also the hotel management informed us to leave the hotel within one hour after check in. When we inquired further the hotel management said that a powerful organization had forced them to remove the journalists from the hotel threatening that if not complied with they would personally come and remove the journalists from the premises.
This is the kind of power that some organizations have to influence the civil administration. These journalists went back home after sleepless nights due to the hardships they faced. It has since come to light that people from the Military were among protestors. When we are in dire need of a strong civil administration, the Ministry of Defence overuses their powers. Interference in to civil administration has restricted human rights and violated good governance. This is not an isolated event but an undemocratic attempt to stop the efforts to combat corruption.