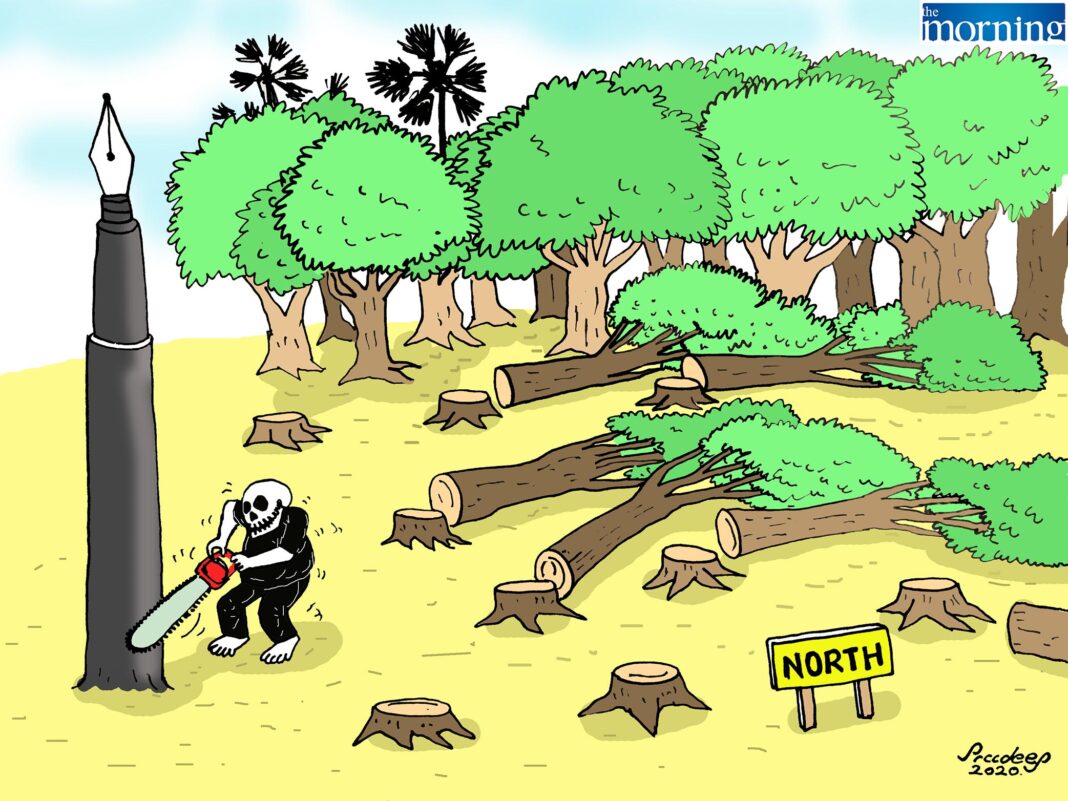 Journalists Shanmugam Thavaseelan and Kanapathipillai Kumanan, correspondents for the Tamil Guardian, were attacked by timber smugglers on October 12 when the journalists duo were working on a story on illegal deforestation and timber smuggling in the Murippu forest area in the Mullaitivu district. The International Federation of Journalists (IFJ) and its Sri Lanka affiliates the Sri Lanka Working Journalists’ Association (SLWJA), the Free Media Movement (FMM) and the Federation of Media Employees’ Trade Union (FMETU) denounce the attack and urge the Sri Lanka government to bring the perpetrators to justice.Impunity

The Tamil Guardian journalists Kumanan and Thavaseelan were attacked  by four men on motorcycle brandishing iron rods after the journalists took photos and video footage of the illegal collection of timber in Murippu jungle area for smuggling purpose. Following the attack, the assailants snatched the camera and journalists’ mobile phones, deleting the videos. The assailants also looted the journalists ‘jewellery and money. Kumanan received serious injuries to his head and nose while Thavaseelan lost a tooth. The attackers also threatened to kill them.

The injured journalists were then taken to Mullaitivu District Hospital, where they are currently undergoing treatment.

Meanwhile, a complaint has been lodged at the Mullaitivu police station against the assailants and police have said that investigations are underway to arrest the perpetrators. The journalists, however, aren’t convinced that the leader of this criminal gang will be arrested as he has continued to roam despite multiple complaints filed against him in past.

Journalists who expose the illegal smuggling of natural resources are frequently targeted in Sri Lanka. Earlier, Derana TV journalist Indunil Wijenayake was attacked by sand-miners in the Kumbukkan Oya area of Monaragala district on October 3.

The SLWJA General Secretary Frank De Zoysa said: “The attack and threat to journalists during their reporting have been common in Sri Lanka due to the state of impunity in crime against journalists. The SLWJA urges the President, the Prime Minister, Minister of Mass Media and other relevant authorities to look into this matter and take quick actions to stop harassing journalists.”

The FMM Convener  Seetha  Ranjanee said:“It is a tragedy that journalists exposing the wrongdoings are attacked and perpetrators go unpunished in Sri Lanka. We urge authorities to initiate legal actions against those involved, regardless of their rank and political affiliations.”

The FMETU General Secretary Dharmasiri Lankapeli said: “The FMETU calls for a speedy investigation into this brutal assault on journalists Shanmugam Thavaseelan and Kanapathipillai Kumanan and bring the perpetrators to justice.”

The IFJ said:“Attacks on journalists for exposing the illegal smuggling of natural resources and ongoing impunity in such cases contributes to the disturbing frequency of attacks on journalists. The IFJ urges the Sri Lanka government to take the case seriously and do all that they can to ensure that the perpetrators of these violent acts are punished.”