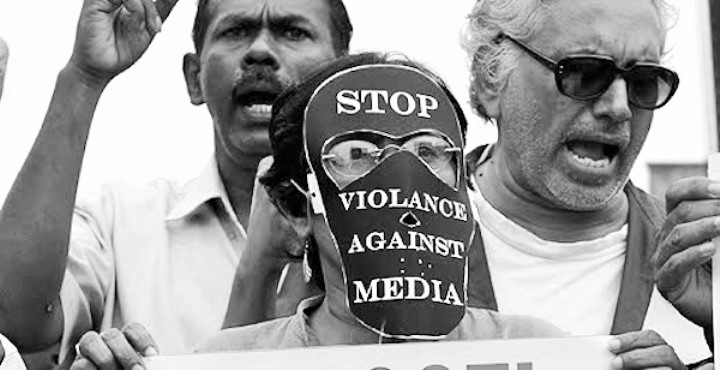 Press freedom watchdog the Free Media Movement issuing a statement says that during the last few days journalists in the North and as well as South had to face serious physical attacks.

On 22nd September 2014 two Sinhala journalists were assaulted by a pro government mob in Haliella, Badulla district. The mob had been led by government politicians. Journalists Chandana KuruppuArachchi of MTV and Swarnawahini TV stations and journalist Palith Ariyawansa, Badulla area correspondent of daily Lankadeepa newspaper were assaulted by the mob, who were attacking a group belongs to opposition UNP. The incident is part of the post-election violence unleashed by pro-government mobs against opposition political parties after the recently concluded Uva provincial council election.

Journalist Chandana KuruppuArachchi has been admitted to the Badulla general hospital and receiving treatments for serious injuries inflicted by the mob.

Meanwhile on 21th night Northern journalist Sinnarasa Siventhiran was questioned and thrown in front of speeding bus by the intelligence operatives. ‘33-year-old reporter from Paranthan, Mr. Sinnarasa Siventhiran, who files news stories at Uthayan’s branch office at Karadippoakku junction had a narrow escape from a squad that intended to kill him by throwing him in front of a vehicle on A9 Road’, reports Tamil Net. However, the attempt failed as the driver of the approaching vehicle managed to turn his vehicle away from the person lying on the road. Mr Siventhiran managed to run towards a restaurant and the public gathered to confront the masked men who were chasing him. The website which is banned in Sri Lanka further reports that ’Squads operated by the SL military have also assaulted two other reporters in recent days and threatened them not to complain or publish news on the attack.’

Siventhiran, in his complaint to the police on Sunday said he could identify one of the masked men who had pulled off his mask before pushing the journalist in front of the vehicle on A9 road.

The Free Media movement, in its statement (dated 23rd Sep 2014) has called on the government to arrest who ever responsible for these attacks and bring them to book.