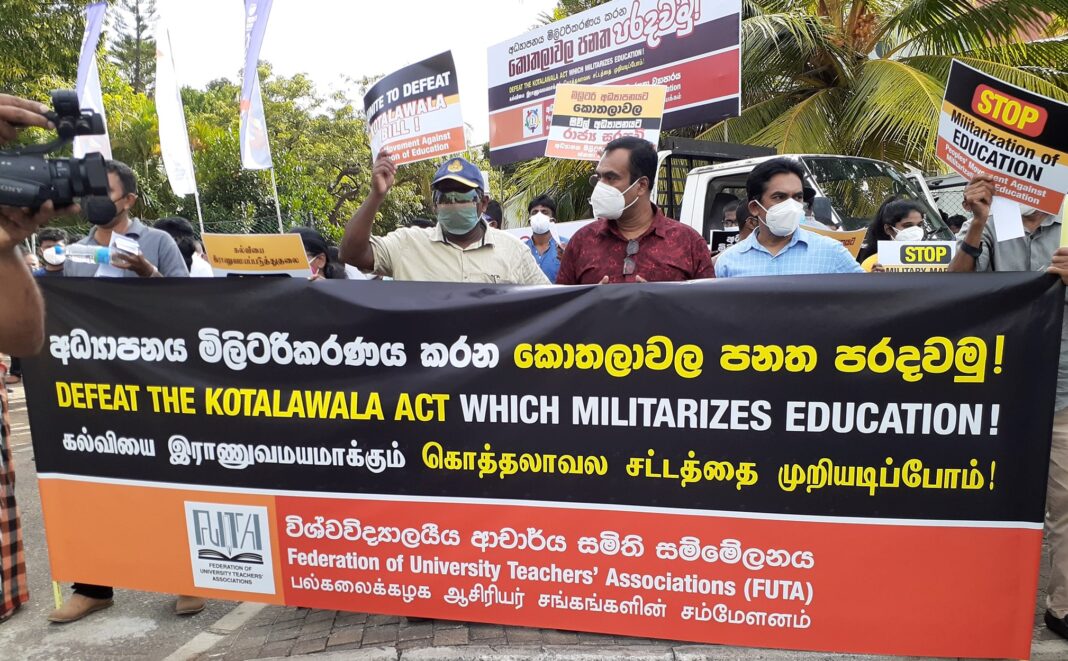 We, the below mentioned civil society organizations and individuals, urge the government to stop the militarization of education through the Kotelawala Defense University Act and stop endangering the safety of activists who led the protests against the Act by continuing to detain them.

Endangering the health of the student leaders

We understand that the ruling party’s attempt to pass the Kotelawala National Defense University (KNDU) Act in the parliament is a step towards militarizing civil space. We strongly condemn expediting the enactment of such an Act, especially amidst a pandemic and repression of student activists and university academics who oppose it. Also, we emphasize that the government should be responsible for endangering the health of the student leaders who led the protests against the Act by imprisoning them on false charges during a pandemic.

As civil society stakeholders, we have continuously advocated protecting the democratic space, human rights, the rule of law, and reconciliation in this country. This is not the first time we have protested the attempts of militarization of the civil space. We have continually paid attention to the increasing militarization responses, especially with the appointment of task forces consisting of military leaders and members for fields such as agriculture, education, conservation of cultural heritage and health, after the current government came to power. We extend our support to the people’s struggle against the efforts for the militarization of education.

We have observed that the content of this Act is a sharp attempt at the militarization of education.

In this military structure, our observation is that the Act contains provisions that make students entirely subject to military discipline. “When the minister is of the view that any situation within the university tends to endanger national security or thereby tend to undermine the proper functioning of the university, the minister can direct the board to take such action as he may deem necessary to control the situation.”

We opine that this affirms that students who enter this system are completely deprived of the opportunity for student activism, which they would enjoy in a democratic context.

The right to protest

Wasantha Mudalige, the Inter-University Students’ Federation convener, who was involved in the protest at Parliament Road on August 3rd, was arrested while returning from a discussion programme on Sirasa TV on the night of August 5th. Student activists Chameera Koswaththa and Koshila Hansamali, who were involved in the protests, were also arrested. Amila Sandeepa, the President of the Jayawardhanapura University Students’ Union, was also abducted and arrested. Lecturer Aminda Lakmal reported on social media an incident of attempting to arrest a person by someone in civilian clothes in a bus, which was transporting a group of people returning from a protest against the Act. We also draw attention to the attempts made to suppress the activists who are actively involved in the struggle of the teachers and the principals.

In our observation, most of these arrests were made under false charges of violating the quarantine laws. Student activists have been denied bail, accusing them of damaging public property by setting fire to a coffin model during the protest.

Pandemic is not a license to suppress protests

It was informed that student leaders Wasantha Mudalige, Chameera Koswaththa, and Amila Sandeepa, who were imprisoned in that way, had been infected with the Covid-19 virus in prison. We strongly emphasize that the government must take responsibility for endangering their lives due to the irresponsibility of the authorities. It is necessarily the government’s responsibility to ensure the healthcare, security, and welfare of the persons who are in state custody.

We strongly emphasize that the pandemic is not a license given to the government to neglect the rights of the people.

We urge the government to repeal the KNDU Act, which has not been tabled in the parliament, and not deprive the people of their right to protest and express their views. Also, we urge immediate action to release the detained student leaders and other activists.