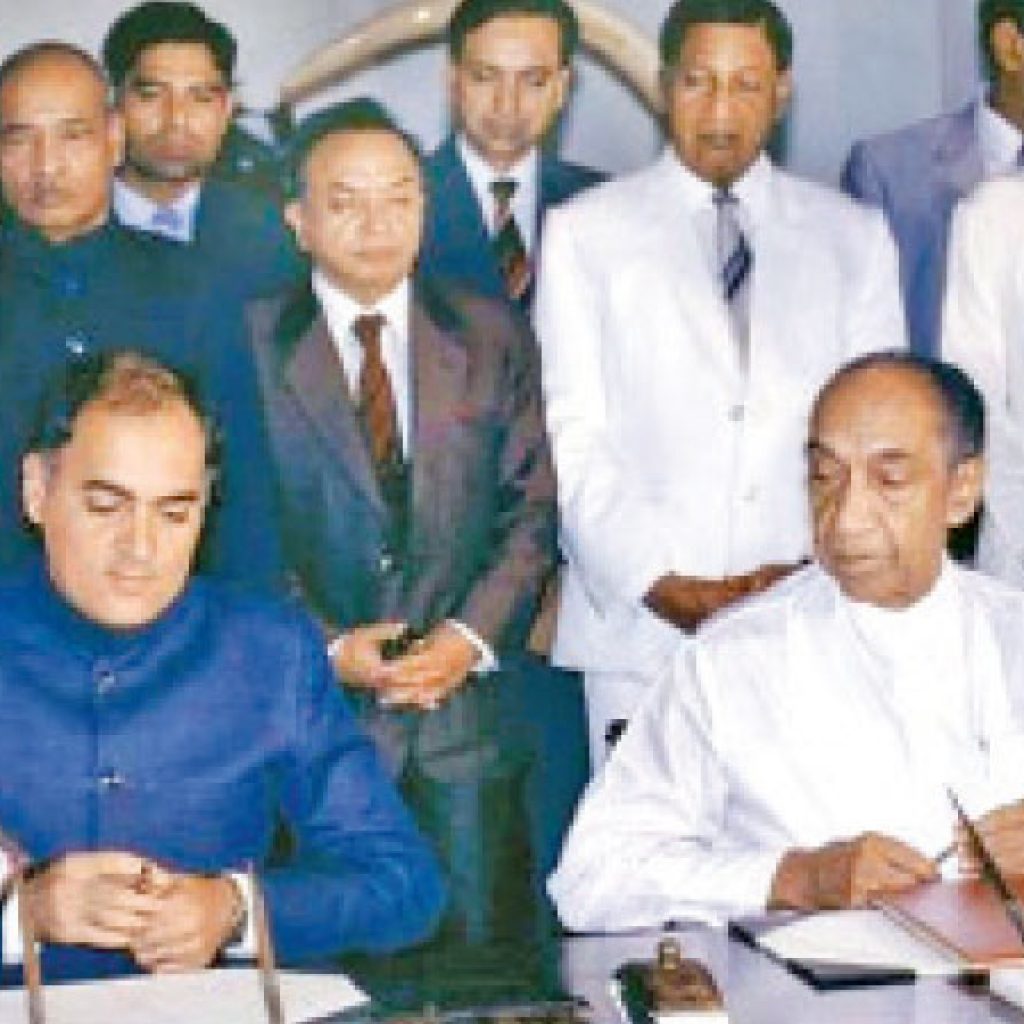 Suresh Premachandran, the EPRLF leader, needs to be congratulated for accepting at long last that the Tamil demand for a 13+ political solution is not appropriate for the time and that they should collectively work for the full implementation of the 13th Amendment flowing from the Indo-Sri Lanka Accord of 1987. By the same token, the Tamils should also acknowledge that if the ruling Rajapaksas do not – or, unable to – give something more for the Tamils than at present, no other ruler would ever be able to do so in the foreseeable future.

In acknowledging this fact, the Tamil polity should also accept that going beyond their personal predilections and political compulsions, the Rajapaksas too accept that there is a hard-core Sinhala-Buddhist ‘nationalist’ constituency that has identified with them for the past decade and more – but would not mind taking a separate route if they see the rulers of the day go against their wishes in terms of a political solution to the ethnic issue, and a future Constitution.

Flowing from it is also the fact that only political administrators with elected mandate for a long period would know how difficult it is to tame an amorphous group of rudderless, route-less, leadership mass that also went around with a ‘nationalist’ tag if its elements feel out of place and jump out of the organised polity. The Tamils would know it better, and Suresh P even more, he having been a militant youth leader himself. The LTTE was a product of such a ‘nationalist’ sentiment, whom the moderate Tamil leadership lost after a time, and forever.

Some may argue that the once-militant JVP is actively supporting a political solution on the lines that the Tamils are demanding, and the JVP has maintained that line for a long time now. The operative word here is ‘once-militant’. The JVP rose against the established Sinhala-Buddhist polity and political administration, not once but twice, and both occasions ended up as bloody ‘civil wars’ – whether or not the Sri Lankan State recognise them as such.

The JVP violence was harsh and hard by any standards, though not comparable to that of the LTTE later. Rather, the LTTE seemed to have learnt its lessons from the two JVP insurgencies, and applied new tactics in terms of weapons, war strategies and battle tactics. More importantly, they made catastrophic terrorism their brand-image.

The Tamil polity should also recognise other facts and factors at this late hour. That Sinhala leaders like Ranil Wickremesinghe denied them their demands, not once but twice in nearly 20 years. First, as the leader of the UNP Opposition, he caused his party MPs to set fire to the Chandrika Package in the Parliament Chamber.

If his opposition was only to President Chandrika Bandaranaike-Kumaratunga using the ethnic issue and proposed solution to include a term-extension for the self surreptitiously, then there were simple and straight ways to do it – simply vote against those clauses, and turn the tables against her, to vote or not to vote for the ‘ethnic solution’ provisions in the Package. It is anybody’s guess if CBK had anticipated such a strong reaction, albeit to her proposal for a term-extension, that she tagged an unwinnable political package to the ethnic solution alongside.

More recently, the more sophisticated political player that he is, Ranil as Prime Minister offered the Tamils a new Constitution, converted the previous Parliament as a Constitution Assembly – and dragged its work through the years of the previous Parliament. Only that there was no solution in the end, whatever the reason and whatever the justification he and his TNA apologists may have been giving out since. The fact is that through the past two decades, Ranil had not changed his spots, nor his ability to make the Tamils believe that he was their sole Sinhala political saviour of all times.

Suresh Premachandran was then still in the TNA and was also going strong. He should ask himself at least now why the TNA insisted that they would talk only to the Rajapaksa Government and not discuss a political solution in Parliament, where it belonged. Their line was that the Government had a two-thirds majority in Parliament and that if they had agreed to a constitutional package with the TNA leadership, then it was incumbent upon the ruling Rajapaksas then to market it to Parliament, where they commanded a two-thirds majority at the time.

The situation is similar now. The Rajapaksas are back in power. They have a two-thirds majority, and they are likely to augment their parliamentary strength even more. Will the Tamil parties, divided as they are this time round, insist only on bilateral talks and then demand that the Government sold such a package to Parliament and get a facilitating constitutional amendment bill passed? Or, are they ready to go through the Constitution-makign process that President Gotabaya Rajapaksa has promised.

There is no clarity if the Government is going to go back to converting Parliament into a Constitution Assembly as well, and set up panels and committees to study and report on specific subjects and areas, as was done under the previous Sirisena-Wickremesinghe regime. But if reports that a draft Constitution Bill will be ready for national discourse in six months is anything to go by, the chances are that it will be an out-and-out Government effort and a national discourse may have to follow suit.

Whatever that be, one thing is becoming certain. That after the 20-A experiment, the Government will be cautious about pushing through such legislative business through Parliament, or at least not hope to achieve it and get away with it. For one, the 20-A has brought the Opposition together faster than they might have otherwise after the disastrous parliamentary polls.

More importantly, even allies of the ruling SLPP are not exactly happy about the way it was packaged and the way it was presented. After protesting from within, NMM leader and senior Cabinet Minister Wimal Weerawansa, a Rajapaksa loyalist otherwise, has reportedly come out openly about his reservations on 20-A. There may be more of the ilk, and there are veteran SLPP MPs who too may fell likewise, and may join the chorus.

For now, however, 20-A is locked down in the Supreme Court, but it may not take too much time for the higher Judiciary to give its opinion, both on the form and content of the draft Bill. There are also casual media mention of the Government coming up with amendment proposals to the amendment – possibly after the Supreme Court had given its ruling and accommodating and answering queries in this regard.

On the Tamil side, the divided polity is on notice period, as far as the formulation of a new Constitution is concerned. If the Government comes up with a unilateral set of draft proposals, then they at best have six months to deliberate among themselves, and take a common stand on larger concepts and specifics on power-sharing. If the Government in its post-20-A wisdom, decides to seek public opinion before preparing the draft Bill, then they may have even less time.

Already, a section of the Tamil media is gloating over unity that the Tamil polity forged for pressing their denied demand for holding a memorial remembrance for senior LTTE cadre, Thileepan, after the courts barred them. They are also celebrating superior Tamil wisdom for launching an impromptu, all-Tamil party protest in Chavakacherry, where the police had purportedly forgotten to obtain a court-ordered ban as elsewhere.

Such symbolisms do matter but then that is not an end in itself. If they want to stay united, which is the need of the hour, they need to sit down and talk seriously. The Tamil parties have different perceptions and positions on different parts and aspects of power-devolution, whether within 13-A or otherwise. The taste of the pudding is in the eating, and the Tamil partis have to demonstrate that they mean business – not only tot heir people, but also the international community, if anyone has to buy them!

Then there is the Muslim element, if they are still serious about the re-merger of the North and the East. Independent of the Government’s known stand of no-denial, the Tamils have to decide if merger at all is possible, given the Muslim political mood, post-blasts. As last year’s Easter blasts showed and also acknowledging the Government’s opposition to re-merger, the Muslim polity too may have begun slipping away from entrenched old guard into the hands of ever-wating militant youth of the Zahran kind, whatever be their goals and leadership.

It is not enough for TNA leaders to say that their proposals included provisions for Muslims also. It is for te other side to feel so, and also propose so. Then comes the long haul, but then alone comes the long haul! Does it all mean, it has to be a 13-A, and not 13-A leave aside a 13-Plus, through the short and the medium term?