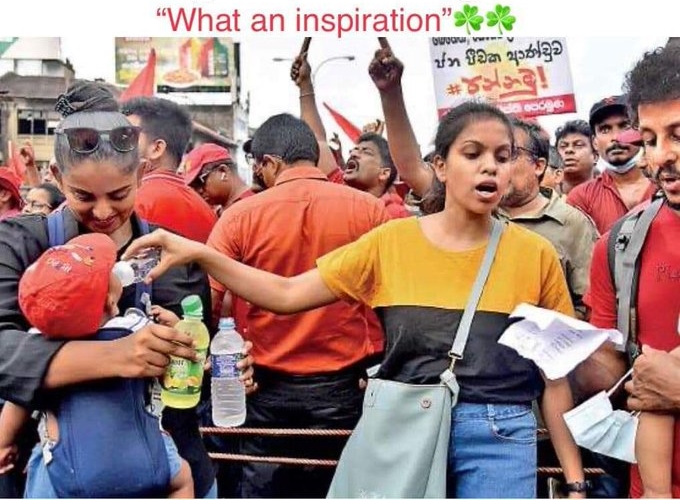 We had an opportunity to be incredibly special. We could’ve shown the world that peaceful revolutions work. Democracy is real. Satyagraha – a force defined by essential truths – does prevail. The peaceful revolution up until this morning, despite desperate attempts to instigate violence, held. The feudal political class was outmaneuvered by a movement of people determined to bring an end to a culture of nepotism, blatant corruption, racism, fascism, sexism… it was a movement that allowed ideas. When you listened to the voices that were raised in opposition to this bankrupt regime, you knew that Sri Lanka was reimagining what might be. What could be. What must be – A land that valued and celebrated our differences.

The Sinhala chant at the Gota Go Gama barricades was – Sinhala, Demala, Muslim, Api – we are Sinhala, we are Tamil, we are Muslim. Clergy of our different faiths stood side by side, eroding the nationalistic fervour with which religion is wielded so deftly in Sri Lanka. Women reportedly walked unmolested. People of diverse sexual orientation and gender identity reminded us that they are citizens too – despite archaic laws that still humiliate them and denigrate their love. Sex workers danced and sang in rebellion against a system that had broken so many of us. Made us compromise on the values we were sold as children; values that didn’t seem to work in the real world of incessant mutual back-scratching, I-went-to-school-with-him, and let-me-make-a-quick-call… machang, I need a favour… Theatre and song were everywhere. Even Jesus walked in under a cross carried by Appuhami…

“So, fuck being violent. Reclaim the revolution. Remake the peace.”

Then came today, when we watched in horror what we had all expected, yet hoped would never happen. The state-sponsored goons descended and destroyed what the people had fought so hard to build… and the riposte when it came, was swift, violent, and justified by a public that has always known how to burn and kill. And like most homo sapiens across the world, we learned to be brutal at the feet of our fathers, and grandfathers, mothers and grandmothers, as their narratives captured every possible rationalization for hating the other, the intruder, the people that are not us.

In March, earlier this year, we lost a client who was stabbed [repeatedly] to death by her husband, in front of her fourteen-year-old daughter. The husband, an ex-soldier, then hanged himself. A murder-suicide that made us once again lament how acceptable violence had become, how we struggle to provide any credible post-conflict mental health programmes for war veterans… tonight, as we watch the violence unfold, apparently, we all need post-conflict mental health coping mechanisms. Sri Lanka has burned before. Ask our Tamil citizens; they lost ancient manuscripts with the burning of the Jaffna Library in 1981, as a majoritarian regime attempted to erase a culture, and kept trying, culminating in the pogrom of 1983, a war that lasted almost three decades, and the continued suppression of fundamental freedoms by an occupying force in the North and East. Ask the Tamil diaspora why they live in Canada, and Australia, and Britain, and Europe, and America and India, and Singapore, and anywhere but the homes they abandoned when they were forced to flee.  Ask our Muslim brothers and sisters of the tales passed down the generations of how they’ve always been excluded and despised.  The riots of 1915 maybe just stories now, but they experienced first-hand the flames of Aluthgama, Ampara, Digana, and the discrimination and suspicion that followed the Easter Sunday bombing.

“Yes, the Rajapakshas are responsible. But does that justify burning and looting and reflecting the very violence we claim to abhor? ”

Mobs stopped cars and checked them today for likely victims. Houses, homes, are burning. I recall being told of an old woman who sat in a chair at the junction of Dawson Road [Amarasekera Mawatha] and Skelton Road in Havelock Town directing marauding mobs [already furnished with electoral lists] to Tamil homes in 1983; homes where her neighbours had lived all their lives. Social media doesn’t need vengeful old women on chairs at junctions. The owners of buses that burned and toppled into the Beira Lake know this. Number plates were shared online by an enraged online community allowing for the targeting of the buses and the SLPP supporters that rode in on them. Supporters, some of whom were reportedly forced to join on pains of losing state benefits. Supporters that floundered, near drowned, in the murky depths of the Beira Lake, beaten and belaboured upon, even as they sank, by pole carrying vigilantes in Swan Peddle Boats [hitherto favoured by young couples seeking privacy in a busy city]. And we are asked to accept that there could be no other outlet for the pent-up hatred they felt at being so subjugated by the ruling regime. Serves them right, apparently. Asked for it. What did they expect? Justifying a violent asking for it culture is a slippery slope that those who work in the space of gender-based and intimate partner violence tumble down often. Yes, the Rajapakshas are responsible. But does that justify burning and looting and reflecting the very violence we claim to abhor?

Near where we live, those in opposition to the rulers tonight, those lighting fire-crackers and checking cars on the Kurunegala – Dambulla highway, appear to be those who once ruled and may hope to do so again. This is mirrored and amplified with varying degrees of violence and destruction across the country. This is the very culture of violence that was challenged by people coming together… but that hope of peace has no legitimacy tonight, other than being the spark that ignited the country.  An excuse to retaliate. That is what they will reduce us to, if we don’t fight back with every fibre of our being and reclaim this revolution that began with peace and hope of a future transformed.  Our Satyagraha or truth-force can still inspire change. We must be resilient. We must challenge those who claim that we are, still in essence, the most violent animal the world has yet experienced. And so what if we burn down the homes and destroy the cars of the perceived oppressor? Nothing has changed. How different is Putin from Genghis Khan? There will always be rulers who want more. Our human history cannot lie. It reflects who we truly are… well, if we hold this to be true, then our evolving history also gave us the universal declaration of human rights, which many may not be able to parrot, but most would affirm. And Putin may not be too different from Genghis Khan, but Genghis Khan had less to be concerned with – no inconvenient Geneva conventions, talk of human rights violations, economic sanctions [that did not deter him], and no fly zones [that were denied despite Zelenskyy’s pleas].

Surely, we’ve moved on [albeit not too far] from being the marauding bands of early Homo Sapiens that walked out of the African basin and murdered our Neanderthal cousins in pre-historic Europe? Science tells us that what we learn through observation and experience; what we learn by modeling on parents and dominant males and females around us, has an impact on our behaviour. Our list of riots and pogroms in the 20th Century make for grim reading.

So, fuck being violent. Reclaim the revolution. Remake the peace. We are small enough of a nation to succeed. We have the population of greater-Mumbai. We have an opportunity to reimagine Sri Lanka together, and to move beyond the imagining to a very real state of being. Don’t let them – in whatever manifestation them may come – stop us. And don’t forget, our children are watching us. Our children are learning.