Sri Lanka: Investigators of alleged army killings of protesters should be truly independent 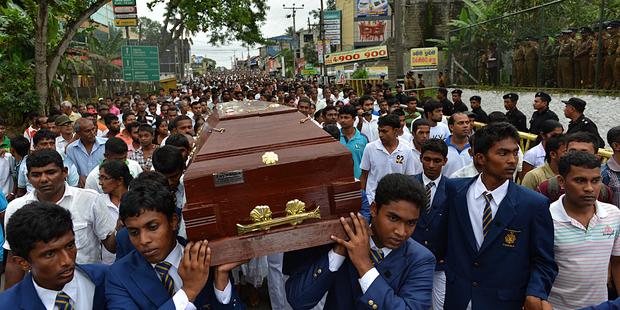 The Sri Lankan authorities must not allow the army to investigate itself over allegations of excessive use of force by its members after three protesters demonstrating over access to drinking water were killed over the weekend, Amnesty International said.

“The Sri Lankan army should have never been policing unarmed demonstrators in the first place, and having them investigate their own alleged abuses is simply ridiculous,” said Polly Truscott, Asia Deputy Director at Amnesty International.

“Sri Lankan authorities must urgently initiate an effective  investigation into this tragic incident. The investigation must be independent, impartial and conducted with the professionalism, resources and powers necessary to unearth the truth about this incident. The army cannot be seen to investigate itself. Anything less will send the message that using  excessive force against protesters is permitted.”

Sri Lanka is legally bound by international human rights treaties to respect and protect the right to life, and provide effective remedy when this right is violated.

Protests began last week as thousands of Weliweriya residents in western Sri Lanka complained about the contamination of their source of drinkable water from a factory nearby.

The deaths on Thursday occurred following clashes between demonstrators and the army. Video footage appears to show soldiers firing live ammunition at protestors; some of whom can be seen throwing rocks.
According to media reports, Akila Dinesh, 17, died after in a local hospital soon after the first clashes on Thursday and Ravishan Perera, 19, died on Saturday. An unnamed 29-year-old man, died at the Colombo National Hospital on Sunday. According to media reports many other protesters were injured, and military personnel also assaulted some demonstrators who had taken refuge in a church.