Sri Lanka: Investigators helpless over Alles’ deal with the LTTE 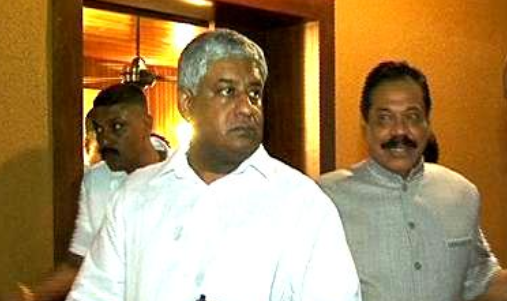 ‘All are equal but some are more equal than others’.

The former parliamentarian’s influence extends beyond the three powerful Rajapaksa brothers who visited him in remand prison.
Although the RADA funds had been disbursed for the Jaya Lanka housing project, not a single house had been constructed neither in Vavuniya nor in Mullaitivu districts.

In the event the RADA officials were not able to unearth the scam, the remaining Rs. 676 million would have either gone to Emil Kanthan to strengthen the LTTE or certain individuals would have siphoned the money.

Nine years after the then Consultant Editor of The Sunday Leader newspaper Sonali Samarasinghe exclusively reported that former President Mahinda Rajapaksa’s scandalous deal with the LTTE under the headline, ‘President’s Tiger Deal Exposed’ as to how millions of public money were given to LTTE through Reconstruction and Development Agency (RADA), the law enforcement authorities who are conducting the investigation have now faced huge challenges in prosecuting those who had a hand to the scam, as the main accused Tiran Alles is alleged to have favourable judicial powers at his finger tips.

Confirming the popular saying that ‘all are equal but some are more equal than others’, the Welikada prison authority has come under severe criticism for providing VVIP treatment to Alles during his short spell in the remand prison. According to inside sources at Welikada, Alles was provided with a butler who too was an inmate to look after Alles’ day-to-day needs. “The butler was provided to iron Alles’ clothes, to make his bed meticulously, to boil water and give him a hot water shower and to give a head massage. Can a sick inmate get a hot water shower in the prison, leave alone head massages and VVIP treatment. Our prison officers are so corrupt and whoever who has money to ’throw’ will get the right royal treatment whereas the others have to suffer immensely,” prison sources said.

The former parliamentarian’s influence extends beyond the three powerful Rajapaksa brothers who visited him in remand prison but even UNP ministers and their families including Minister Sajith Premadasa family visiting him in prison.

Be that as it may, the indictment served consists of seven charges under offences punishable under Section 113 B, 102 and 386 of the Penal Code and under Section 5(1) of the Public Property Act No. 12 of 1982.

However on November 8, the Court of Appeal issued an interim order suspending the High Court order served on Alles and ordered the Welikada Prison Superintendent to release him (Alles) immediately after considering the revision application. Following this, on November 10, the two other suspects Saliya Wickremasuriya and Dr. Jayantha Dias Samarasinghe too were granted bail by the Colombo High Court. “When there is solid evidence to prove how state funds to the tune of Rs. 124 million was given away to Emil Kanthan on the pretext of constructing 800 housing units in Vavuniya and Mullaitivu districts, under the Public Property Act, committing such a fraud is a non-bailable offence. However, it was interesting to find out how the Appeal Court took up Alles’ appeal in the absence of the Attorney General’s representatives and suspended the High Court order given against the main accused, Tiran Alles. Had the court wanted to reconsider the appeal, the AG’s Department should have been asked to appear in court and then take the decision,” a senior official at the Attorney General’s Department said on condition of anonymity.

After Alles’ Nawala residence came under a grenade attack in 2010, at a media briefing, he stated as to how in the run up to the 2005 Presidential election, Mahinda Rajapaksa wanted Alles to give a contact number to a person in the north. According to Alles, he had introduced Emil Kanthan to Basil Rajapaksa at his Colombo office where on a later date Basil Rajapaksa had given Rs.180 million – in Sri Lankan rupees and US Dollars to purchase boats for the Tigers in order to stop the Tamils from voting at the presidential election.

Despite of all these concrete evidence the investigators have proved with supportive documents, questions have been raised as to why the country’s law system is obstructing the investigators from taking legal action against the accused.

It is learnt that half of the ‘deal’ money was paid upfront while the balance was to be paid after the election if Mahinda Rajapaksa becomes the President. It was at this point RADA was formed under a presidential decree and was not legally established under the Company’s Act or under an Act of Parliament.

RADA was established as the successor to the Task Force for Rebuilding the Nation (TAFREN), Task Force for Relief (TAFOR) and Rehabilitation of Person, Properties and Industries Authority (REPPIA).

According to the Presidential directive under which RADA was established, Tiran Alles was appointed its Chairman and Chief Executive Officer although he did not have any experience in the construction field. The decree dated November 28, 2005 further states as thus, ‘I further appoint Tiran Alles as the Chief Executive Office of the Reconstruction and Development Agency who shall also be the Chairman of the Board of Management.

‘Now therefore, I, Mahinda Rajapaksa in pursuance of the provisions of Article 33 of the constitution of the Democratic Socialist Republic of Sri Lanka, hereby create the Reconstruction and Development Agency to facilitate and assist the government to continue with such reconstructions and development work in a more coordinated, cost effective and expeditious manner and declare that from this date, TAFREN and TAFOR will cease to function and all work carried out by TAFREN and TAFOR will come under the purview and be carried out by the RADA. Further any work being carried out by REPPIA shall also be coordinated by the RADA’.

After the establishment of RADA, the COO – Saliya Wickramasuriya had been asked to prepare its second board papers to seek board approvals for the first housing projects under Mahinda Rajapaksa’s Jaya Lanka programme in the north and the east. The board approval was also sought to proceed with the implementation of this programme in Kilinochchi, Mullaitivu, Trincomalee, Batticaloa, Vavuniya and Mannar districts and requesting the treasury to release Rs. 800 million to RADA, to appoint a company from the region to act as project consultant and jointly with this consultant to invite offers from contractors from the locality.

After the second board meeting held on December 28, the same evening Alles had wanted Wickramasuriya to get prepared to make a visit to Kilinochchi on December 30 where they met Emil Kanthan and local LTTE officers.

According to the statement given by Wickramasuriya to the police investigators, he had met Alles at Anuradhapura at breakfast on their planned journey to Kilinochchi where Alles had introduced Kanthan to him but not giving his full name. When Wickramasuriys inquired who Kanthan was, Alles had stated that it was he who organizes all their meetings in Kilinochchi. All three had then proceeded towards Kilinochchi where a meeting was held with five District Secretaries and another Tamil youth called Punann. Wickremasuriya’s statement further states that he could not understand any of the discussions that were held in Kilinochchi as they were conducted in Tamil. However he had further stated how LTTE representatives did not want any outsiders to engage in the constructions work and that he was not happy the way the Building Consultant and contractors were selected.

Three to four days after the Kilinochchi meeting, Tiran had got proposals from two building consultants from Vavuniya. Out of the two consultants, one party had wanted 3% commission from the total project cost while the other party wanted 1% commission. It later came to light that both these parties were connected to each other. The lowest bidder – G. S. Builder and Consultants of 371, Mahaveli Lane, Veppakulam was offered the contract under Gajan Kumara’s name. Gajan Kumara was a brother of Emil Kanthan’s girlfriend. Meanwhile three building companies from the locality came forward to handle the construction work. They were B&K Holding owned by Kishor Kumar, Naxim Builders and Consultants and Pyramid Civil Construction Works.

According to Company Registrar, G.S. Builders was not registered with the Company Registrar, was connected to Emil Kanthan. The contract had been offered without following government procurement tender guidelines although the cabinet approval has to be obtained for any tender worth more than Rs. 100 million.

Meanwhile, COO, Saliya Wickramasuriya in a letter dated January 6, 2006 wrote to Dr. P. B. Jayasundera, the Treasury Secretary requesting Rs.800 million and that the project will stimulate the local economies as well as housing since RADA recommends to use local consultants and contractors where possible and to transfer 10% of the total project cost to RADA bank by January 16, 2006.

However, the Treasury Secretary informed Wickramasuriya to use the funds available with TAFREN, TAFOR and REPPIA to which the latter wanted a separate treasury allocation for the project. As a result Rs. 200 million was given to initiate the project.

At the tender board meeting to select the construction company out of the three that had come forward, G & K Holdings secured the contract. Although Finance Manager RADA who does not attend tender board meetings, was present on this occasion and was adamant to award the tender to the selected company then and there, the treasury representative Dils Abeysooriya said that the tender board can only make the recommendations but it is the cabinet of ministers that has to approve since it is worth more than Rs.100 million. However despite Abeysooriya’s valid argument, Alles had wanted Saliya Wickramasuriya to award the tender claiming that he will get the cabinet approval later.

Once the said ‘construction’ work was started, the local officers including the respective District and Divisional Secretaries informed RADA the progress of the construction work. Although it was reported to RADA that the construction work was going on without any interruption and funds were regularly given to the construction companies, the COO Saliya Wickramasuriya later had found out that although the RADA funds had been disbursed for the Jaya Lanka housing project not a single house had been constructed neither in Vavuniya nor in Mullaitivu districts.

Wickramasuriya immediately instructed the construction company to halt the ‘work’ and refused to make any further payment to which Tiran Alles accused the RADA officials and signed two cheques amounting closer to Rs.30 million and made payment to Emil Kanthan. By the time the project was winded up by Wickramasuriya, with the knowledge of Tiran Alles and then President Mahinda Rajapaksa, a total amounting to Rs. 124 million had been paid to the LTTE for preventing the Tamils from casting their vote at the 2005 presidential election.

When Alles was questioned over the cheques he had signed amounting closer to Rs. 30 million just before the scandalous Jaya Lanka housing project was winded up by Wickramasuriya, Alles had stated that he had no authority to sign any cheques as he was not holding an executive position at RADA, although the Presidential directive dated November 28, 2005 had clearly stated that Tiran Alles had been appointed as the CEO/ Chairman of RADA.

In the event the RADA officials were not able to unearth the scam, which was proceeding in the guise of the Jaya Lanka housing project, the remaining Rs. 676 million would have either gone to Emil Kanthan to strengthen the LTTE funds or certain individuals would have siphoned the money.

In such a background, although all proven evidence have now emerged how public funds amounting to Rs. 124 million was given to strengthen the LTTE by the Rajapaksa’s with the involvement of Tiran Alles, the investigators are facing a yeoman task to take legal action against the wrongdoers.
www.thesundayleader.lk