Sri Lanka: International Judges can be phased out once local capacity is build – Saravanamuttu. 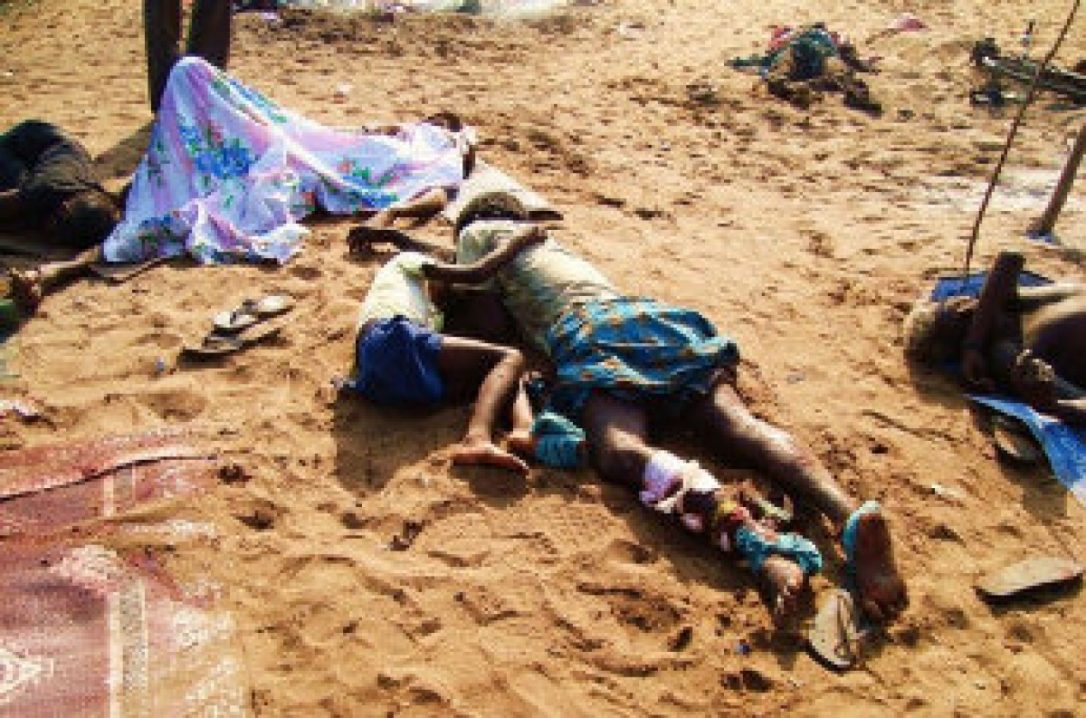 An image from the documentary ‘Sri Lanka’s Killing Fields.’ The harrowing film provides evidence of war crimes and crimes against humanity.  (Channel 4).

The Consultations Task Force (CTF) on Reconciliation Mechanisms’ final report which was released this week drew controversy for suggesting the need for international persons in a special court along with a special counsel to hear cases of war crimes. Executive Director of the Centre for Policy Alternatives and member of the CTF, Dr. Paikiasothy Saravanamuttu in an interview with Daily News explained that international persons were only recommended to assure credibility in a judicial mechanism and that they could be phased out once local capacity is built.

Q: Your report had expressed frustration among the people and yet another task force was interviewing them. At the same time, Minister Rajitha Senaratne said the government would not appoint foreign judges and while the committees can submit reports, the government makes the decision at the end of the day. Then do you think that the people were right in being weary?

A. At the very beginning people did come and express their frustration but then they were pleased, that this was the first time that a government was asking them for an opinion about a particular policy before a policy decision was made. At least that’s what they thought and so did we.

Secondly, the Task Force did set out to find out what people thought. If there were pre-determined decisions taken, with respect to the special courts or anything else, the people were told that they had to make up their minds within that framework and provide whatever recommendations they had.

What we wanted, before the consultations took place was for the government to do an outreach programme and explain to the people as to why transitional justice was necessary, why they were proposing these four mechanisms and what the do’s and don’ts were with regard to its structures.

The report was compiled on the basis of what people said to us. It is up to the government to take from it or not, and hopefully explain to the people why it is taking recommendation A as opposed to B.

Finally, in October last year there was a resolution co-sponsored by Sri Lanka at the UN Human Rights Council that allowed for international participation in these mechanisms.

Q: Do you think that if these outreach programmes had been done by the government, the people would have been more open?

Q: But we have repeatedly heard the President and Prime Minister insist that reconciliation is a priority of the government and that we need to have it?

A. One thing everyone could agree on is that reconciliation must happen. What is important, is ‘what one means by it’ and ‘what is one going to do?’ Some may think that setting up a commission was what reconciliation is all about while others may think of something else.

The difference in opinion lies in what you mean by reconciliation and what institutions and processes you want to establish to achieve it.

Everyone in Sri Lanka has a notion of reconciliation but they were being asked to comment on mechanisms, the government of Sri Lanka was proposing.

Q: One of the recommendations was the need to have international judges and a special counsel for a special court system. While many may have wished for this, this seems to be the one which would attract most opposition?

A. It needs to be explained properly. The whole purpose of any court is to administer justice. Thus there needs to be faith, confidence and trust in that institution to be able to do so. Unfortunately the situation in this country is such that there are a substantial number of people and a fair number of them are victims, who do not trust the existing system. And most of them happened to be in the North and East, who turn around and say that if it’s completely domestic, it will not be credible. Then you have cases like the murder of Raviraj where people say ‘I told you so’. So that’s a strong body of opinion that needs to be taken into account. There’s another body of opinion which says, this is a sovereign country and that bringing in internationals is not right.

The issue here is, would bringing in internationals really be an encroachment of our sovereignty?

We are recommending for example some internationals on these benches; at least one in order to build credibility and to deal with the suspicion that things would be biased if it is entirely domestic. And then the ‘international’ can come out and say if things are not being followed according to due process.

Also if there is evidence for prosecution of such crimes, these have never been prosecuted in Sri Lanka before so you need that international expertise. We are also saying that this does not have to be a permanent feature. Once the technical and capacity questions have been addressed and local expertise is built up, then internationals can be phased out. It has happened in other countries.

I don’t see what the fuss is about, people are simply trying to make a lot of political capital out of this. End of the day, we have to ask ourselves what’s this special court all about and what is this accountability mechanism all about and look at the most efficient way we can get the justice we wanted.

We are not saying that all members of the security forces have to be put in the dock because they are guilty of war crimes. That’s nonsense. There will be certain instances of it and you cannot bring these things into court unless you have hard evidence. So this is not some sort of witch hunt.

If people do have hard evidence of such cases, even the security forces would have a hard look and say we too need to salvage our honour and have a proper mechanism to investigate it.

Q: The Security forces too have made submissions and insisted that no such crimes had ever taken place?

A. Their argument was that we surely support reconciliation but as far as we are concerned, we never practiced any war crimes, if there was, it should be investigated and brought to justice. They were very reasonable. But yes, they do start from the position that no crimes against humanity happened.

Q: There are allegations that the report is ‘pro-UN’ or ‘pro-West’?

A. They would say that anyway. There are people in this country who were in power and the like who would shout ‘western conspiracy’ ‘imperialism’ or ‘traitor’- it is tiresome. We need to move forward and we are unable to do that with such shrieks.

We had over 7,000 submissions and those who have doubts can read their accounts and ask the people.

Q: The Hybrid Court model was recommended earlier too and not responded to positively by the government?

A. Taken well by the government or not when the people make such a submission made to us, do we turn around and tell the people ‘look the government may not like it?’ No, we are duty bound to convey what they think.

Q: Do you think that the Consultation Task force is yet another box to be ticked off?

A. It just as well could be. It is up to civil society to tell the government and ask whether they are serious about transitional justice or not.

Q: The report also shows a divide in terms of what the people in the North and South want. The North seems to be seeking for the need to have the truth established and investigated while the South is more insistent on moving on and burying the past. How would a government reconcile the two demands?

A. You have to ask the government. There are different opinions across the country in respect to certain aspects of reconciliation. It is not correct that the North said this and that the South said this. There are commonalities and differences between the two. The government then has to go out again and find out what is common among them, what their core understandings and values are before they set up any of these mechanisms. What we can report is a variety of views across the country.

But at the same time, in the South too you had people saying yes there should be international participation. It’s not clear cut.

Q: What did you find about reconciliation?

A. People across the country are very convinced of the importance of reconciliation moving forward. They have suggestions to make with regard to the four conventional pillars from accountability, reparations, guarantees of non-recurrence and truth.

They want the truth established and acknowledged, those who gave orders to be held accountable, they want to be part of any reconciliation mechanism set up, they want them located in places they have access to and for it to operate in languages they understand.

They see these factors important and want action. They are tired of commission after commission.

Q: Many of what is recommended is not new. Hasn’t it all been said before?

A. Yes, most of what has been said, has been repeated, there’s nothing earth shattering. But what is interesting is that the people’s views and opinions are different to what the politicians make it out to be.

There is remarkable coincidence between what people in the North and South say.

There is no sharp divide between the two; to the great annoyance of nationalists from both sides.