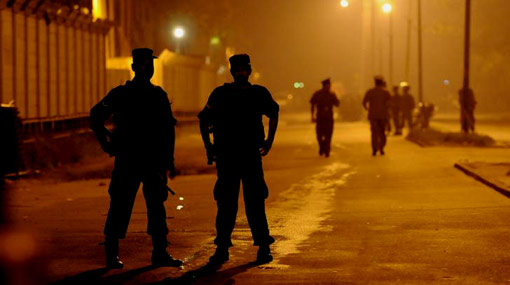 A minor incident took place between individuals of Sinhala and Muslim community had  erupted in to ethnic clash in the southern town of  Gintota, Galle district quickly showing the ethnic distrust and tensions remain in the multi-ethnic Sri Lankan society.

Ironically the incident took place on 17th November , the day  that Sri Lanka was reassuring UN member states at the Universal Periodic Review 28th session  in Geneva that country is in the right path to reconciliation and the government is committed to protect rule of law.

“According to the Vice President of the Sri Lanka Muslim Council, the incident had begun on Thursday when a man identified as a Sinhalese had knocked a man who was identified as a Muslim with his bike. Thereafter an alleged gang of Muslims had attacked the Sinhala man.

This was followed with the Sinhalese individual returning with a gang of his own, Ahmed said, which erupted in a scuffle that led to the turmoil that encompassed the Gintota area.

At the time of writing, the Police media unit told the Daily FT that a Special Task Force Team along with the police riot squad had been deployed to the area. Police and the STF had used tear gas to disperse the unruly crowd.

Several houses had been set alight while the local mosque too was damaged, the Police reported.”

Daily Mirror on 18th November reports that situation is under control, several suspects.

“The tense situation which occurred in Gintota last night is completely under control, with law and order being established in the area, Law and Order Minister Sagala Ratnayaka said today.

In a statement, he said that additional Police battalions, the Police Special Task Force, the Anti-riot Squad and the military were called in last night to bring the situation under control.

“Under the instructions of the President and the Prime Minister, curfew was imposed in the area from last night until 9 am this morning. I am aware that some political groups are now on a desperate mission to turn this minor brawl into a Sinhala-Muslim clash. I urge the public not to be misled by their false propaganda,” he said.

He said the same elements were now in the process of disseminating false videos and news on social media platformss to stir up communal sentiments.

“I reiterate that stern action will be taken against everyone attempting to resort to racist propaganda irrespective of their positions and political affiliations. The same will apply to the rumour-mongers trying to capitalise on this opportunity to achieve petty political gains,” the Minister said.

The IGP has instructed the CID to identify the personnel who misuse social media to spread false news over the incident and to take stern action against them.

Meanwhile, police said that 19 suspects were arrested so far over the tense situation reported in the area yesterday.

Quoting  the Police Media Spokesperson Ruwan Gunasekara Daily Mirror gives a different version of the  the first incident had taken place on November 13.

“On November 13, a Muslim woman and her daughter were hit by a motorbike driven by a Sinhalese man. All three were injured and hospitalised. They were discharged after treatments and the issue was settled outside the Police as the bike rider had given Rs.25,000 as compensation to the woman and her daughter. Thereafter, bike rider was released on police bail,” he said.

On Thursday, an attack had taken place in retaliation over the accident. “However, no one with links to the accident was present at the scene which took place on Thursday in which one Muslim was injured,” he said.

Later on, two houses owned by Sinhalese persons had been attacked and one Sinhalese individual had been injured. The chain of events had then escalated and was brought under control by Friday with the help of politicians and religious leaders.

“However, another violent incident broke out last evening. As a result, the curfew was imposed,” he said adding the situation was under control now. (Lahiru Pothmulla)