Sri Lanka in danger of falling back into Rajapaksa tyranny 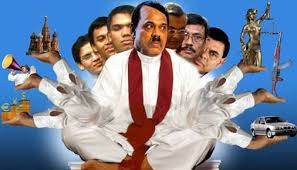 Despite the progress made over a few minor matters, since the silent revolution on January 8, 2015, which established the coalition government, no good governance has been established thus far and Sri Lanka is dangerously getting closer to relapsing into a “Rajapaksa dictatorship”, a renowned economist warned this week.

According to Institute of Policy Studies Chairman Prof. Razeen Sally, Sri Lanka is currently just drifting without making much progress in any of the crucial fronts, which will soon make the whole landscape unstable, risking the country relapsing into “a Rajapaksa-like scenario” that existed in the past. “With the rising social discontent, particularly outside Colombo, I think this scenario (a relapse into a Rajapaksa-like scenario) becomes more plausible by the day or by the month in the run up to the next presidential election,” he said. Prof. Sally, who is an Associate Professor at the Lee Kuan Yew School of Public Policy at the National University of Singapore, added that although the government has changed, the political class had not changed in Sri Lanka.

“Musical chairs have been played within the political class,” he stressed, while presenting three future scenarios for Sri Lanka in a public lecture organised by Advocata, an independent public policy think tank, jointly with the business magazine Echelon, in Colombo. Prof. Sally noted that it would be either naive or stupid or both for someone to dismiss this plausibility unless the present regime carries out the promised reforms to uplift the country to the next level.

However, he said the current regime would have to expedite the transition because they would have only a year at best before this window of opportunity closes. “The danger is that if you don’t make judicious moves towards scenario two (take-off scenario), we are going into the scenario three or relapse,” he said.
Prof. Sally further expressed deep worries over the country drifting back into China’s influence, which will bring serious implications not just in the economic front but also in its security front. “This is what worries me; Sri Lanka is now drifting back to Chinese influence,” he remarked adding that this poses risks without appropriate countervailing balance of productive private investments coming from the West, which could be far more productive than from the Chinese state-owned companies.

Sri Lanka’s present rulers have been trying to restore the strained relationship with the Chinese during the last one year or so for dire want of China’s investments and also to renegotiate better terms to repay their commercial loans as their much touted balanced foreign policy failed to bring the expected results, both politically and economically.

The government recently struck a deal with China to lease 80 percent of the Chinese-funded Hambantota port for US $ 1.2 billion and also promised 15,000 hectares for an industrial zone designated for Chinese companies.

Prof. Sally hailed the move as it could relieve the government of its massive foreign debt pile but said nobody other than China is interested in investing in the vanity projects carried out by the Rajapaksas.
However, he was concerned about the style of capitalism practiced by China’s state sector, which is characterized by buying the political and business elite.

“Do we really want to see that happening in Sri Lanka? It’s already happening. It happened under the last government,” said Prof. Sally, urging the media and civil society to scrutinize these projects very carefully going forward.

Further, he also cautioned about the possible security concerns that would arise from realigning with China because that could antagonize the other partners in the West and within the region.

“The last thing we need is another (Chinese) submarine docking in the Sri Lankan port,” he remarked.
Daily Mirror