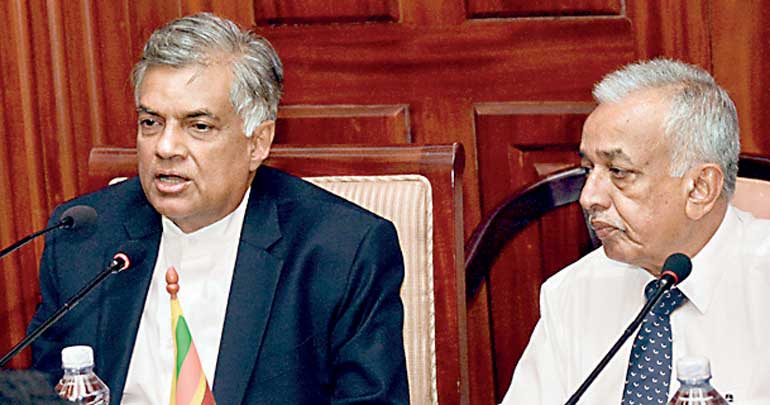 Don’t interfere with anything in the Constitution. That must be maintained, for it is the only safeguard of our liberties. – Former US President Abraham Lincoln.

As the Ceylon Today Sunday Edition reported in its lead story, now the latest is that the government is to bring a Special Provisions Bill, in the House of Parliament, for two Ministers, namely Prime Minister Ranil Wickremesinghe in his capacity as Minister National Policies and Economic Affairs and Minister of Development Strategies and International Trade Malik Samarawickrema, in the guise of removing bottlenecks that exist in the promotion of Foreign Direct Investment.

The Development (Special Provisions) Draft Bill under Clause 51 on page 34 states: under the headline ‘No action or prosecution shall be instituted against –

Any expenses incurred by such a person as is referred to in Paragraph (b) of subsection ( 1) in any other action or prosecution brought against him under this Act on the direction of the Board, Agency or other Institution, shall, if the Courts hold such act was done in good faith, be paid out by the Consolidated Fund, unless such expenses are recovered by him in such action or prosecution.

Usurpation of the President

It is also moot to note that this special piece of Draconian Law is the usurpation of the Powers of the President, which is also a contravention of the Constitution. If this Special Provisions Bill is also to be included in the Constitution, then it will have to have a two-thirds majority in Parliament and also a Referendum.

It could be technically possible for the government to get the two-thirds majority with the SLFP Members of Parliament, who will vote like lackeys but the crunch will come when it will go to a Referendum. But, whether the Government will go for a Referendum. to test the pulse of the people, is anybody’s guess!

(b) the Executive power of the People, including the defence of Sri Lanka, shall be exercised by the President of the Republic elected by the People;

(c) the Judicial power of the People shall be exercised by Parliament through Courts, Tribunals and institutions created and established, or recognized, by the Constitution, or created and established by law, except in regard to matters relating to the privileges, immunities and powers of Parliament and of its Members, wherein the Judicial power of the People may be exercised directly by Parliament according to law;

(d) the fundamental rights which are by the Constitution declared and recognized shall be respected, secured and advanced by all the organs of government and shall not be abridged, restricted or denied, save in the manner and to the extent hereinafter provided; and

(e) the franchise shall be exercisable at the election of the President of the Republic and of the Members of Parliament and at every Referendum by every citizen who has attained the age of eighteen years and who, being qualified to be an elector as hereinafter provided, has his name entered in the register of electors.

Immunity with President only

Then, comes the clause of the Immunity. Right now, the immunity is vested with the President and only the President, which the government solemnly pledged to abolish. Any move to usurp that, will be, again, in violation and in contravention of the Constitution. That will also require a two-thirds majority in Parliament and a Referendum.

Immunity of President from suit.

Article 35. (1) While any person holds office as President, no proceedings shall he instituted or continued against him in any Court or Tribunal in respect of anything done or omitted to be done by him either in his official or private capacity.

(2) Where provision is made by law limiting the time within which proceedings of any description may be brought against any person, the period of time during which such person holds the office of President shall not be taken into account in calculating any period of time prescribed by that law.