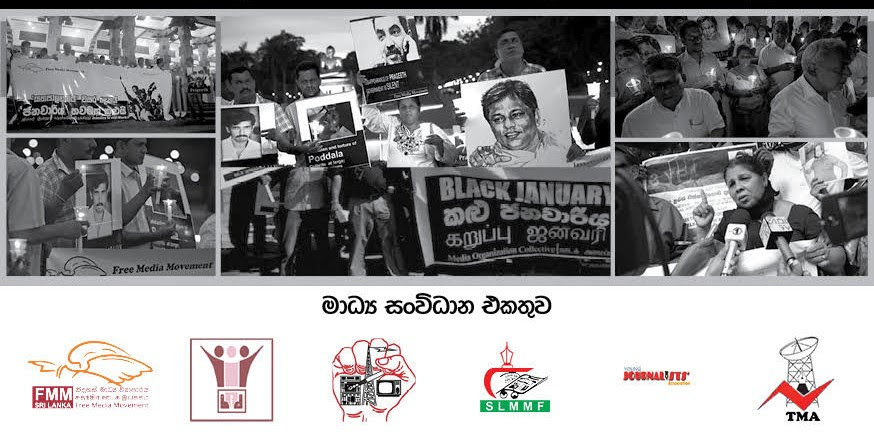 Journalists called on Sri Lanka’s government to take meaningful action to investigate journalist killings and disappearances on the annual ‘Black January’ commemoration on January 28. The International Federation of Journalists (IFJ) and its Sri Lankan affiliate, the Free Media Movement urge the government in Sri Lanka to end a dark history of impunity for crimes against journalists in the country.

Among the key demands, journalists at the Lipton Circus event called on the new Gotabaya Rajapaksa government to end impunity and secure justice for outstanding unsolved cases of media personnel who have died, disappeared or been injured whilst pursuing their profession. The commemoration was organized jointly by IFJ affiliates, the Federation of Media Employers Trade Union (FMETU), the Free Media Movement (FMM) and Sri Lanka Working Journalist Association (SLWJA) with the Sri Lanka Muslim Forum, the Sri Lanka Young Journalists Association and the Tamil Media Alliance.

Between 2005 and 2015, under the presidency of Gotabaya’s brother, long-time leader Mahinda Rajapaksa dozens of journalists were reported killed, abducted and tortured and at least 60 fled the country out of fear with most still currently living in exile. Gotabhaya Rajapaksa, who was defence minister during his brother’s rule, led a unit accused of assassinating former Sunday Leader newspaper editor Lasantha Wickrematunge. Gotabaya has denied all the charges.

Following the dark period, Maithripala Sirisena led the country from 2015 to 2019, vowing to reopen investigations into killed journalists as part of his campaigns. But his promises failed to transpire. While court cases ensued, not a single conviction has been achieved.

Since Gotabaya Rajapaksa’s election in November 2019, journalists and media rights organizations are concerned at an escalation in crimes against journalists in the relatively short period since. The IFJ joins its affiliates in calling on Sri Lanka’s government to respect the media, its right to report and its absolute right to safety. The advocacy groups said the event was aimed to exert pressure for action on crimes against journalists in Sri Lanka.

The FMM said: “Free Media Movement reiterates that it is the responsibility of the government to maintain an environment in which journalists can engage in their activities free of violence”.

The IFJ said: “We commend media workers and their representative groups for maintaining their solidarity and voice on these critical issues on impunity for crimes against media for the future stability and safety of media in Sri Lanka.”