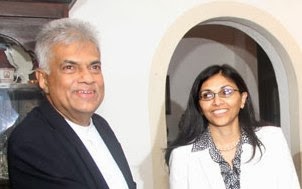 Opposition and UNP National Leader Ranil Wickremesinghe told visiting US Assistant Secretary of State for South and Central Asian Affairs Nisha Desai Biswal that his party was ready for cooperation with the government in the implementation of Lessons Learnt and Reconciliation Commission (LLRC) recommendations if the ruling party took any positive step in this regard within the next two weeks.

Mr. Wickremesinghe had given this assurance to Ms. Biswal when he met her at his residence in Colombo this evening.

Mr. Wickremesinghe who spoke to journalists after his meeting with the US Assistant Secretary of State said he had informed her that his party would support the government to enact whatever legislations needed to implement LLRC recommendations if the government made a positive move within two weeks.

Mr. Wickremesinghe had told Ms. Biswal that his party’s stance was that LLRC recommendations should be implemented to ensure democracy and preservation of human rights in the country.

They also discussed the present situation with regard to media freedom in the country.

He said the US Assistant Secretary of State stated during the meeting that the US would like to see Sri Lanka making more progress in bringing about reconciliation and ensuring democracy in the country.

The Opposition leader and the US Assistant Secretary of State had also discussed the US sponsored resolution on Sri Lanka which is to come up at the United Nations Human Rights Commission sessions in March this year.