Sri Lanka: Immediate investigations should be carried out on violence against journalists. – Free Media Movement 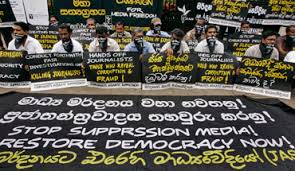 The Free Media Movement strongly condemns the continuous threats, harassment and violence the journalists have been subjected over the past few days due to their profession.

The latest addition to this sequence of events is the assault targeting the Aluthgama provincial journalist Thusitha Kumara de Silva and his wife. According to him, the STF has raided and taken
into custody several suspects from artificial toddy producing places in Aluthgama and have handed them over to Aluthgama Police for further investigations. He and his wife were attacked by a group of
people accused in this incident, for his role in publishing the news item through the media institution where he is currently working.

Victimized journalist Thusitha Kumara de Silva states that the attackers had threatened him earlier saying that once their government comes into power, they would know how to answer the news item.
According to his statement, if there is any political vengeance in this attack, the Free Media Movement condemns it strongly as a serious threat to the democratic space.

The Free Media Movement views such demeaning incidents carried out against professional journalists as a barrier to the existence of democracy. The Free Media Movement urges all authorities
to bring the suspects to justice by promptly conducting a fair investigation, without disregarding this incident as a minor incident.